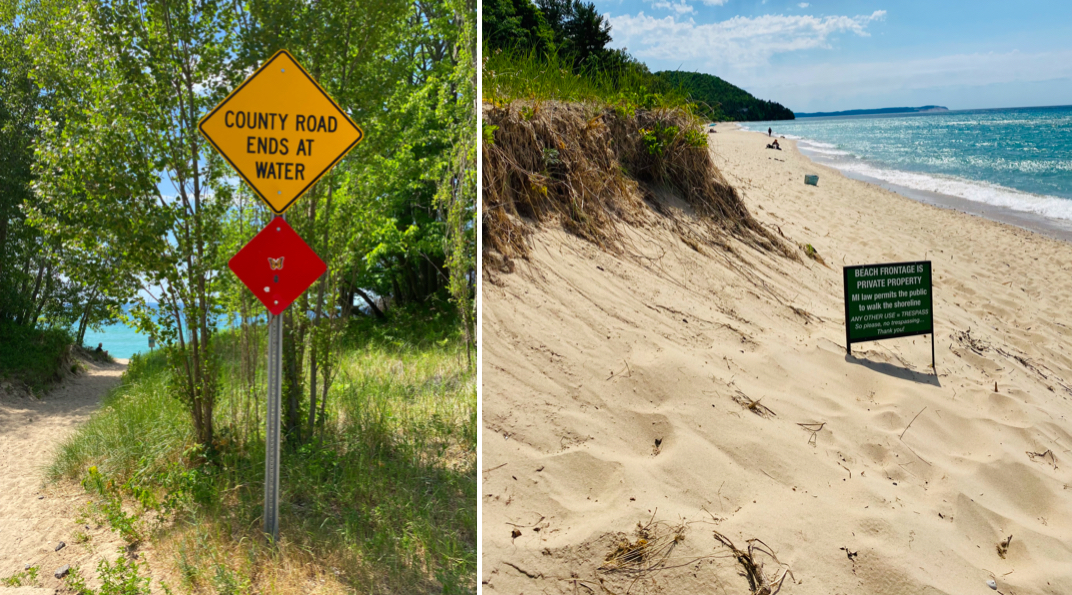 Residents of Leelanau County have spoken: For the moment at least, Leland’s South Beach will remain the publicly accessible space it has been, free of the restrictions a pair of nearby property owners had sought to impose.

Since July 2019, Leland Township and the Leelanau County Road Commission have been locked in a legal battle with two property owners whose homes abut South Beach — a 60-foot-wide slice of Lake Michigan beachfront, also known as “Reynolds Beach” or “Christmas Tree Beach” — that is situated just south of downtown Leland. Though the beach has long been treated as a point of public access to the lake, the plaintiffs in the lawsuit have argued that the land is, in fact, private.

The beach is found at the end of Reynolds Street, a road on which the plaintiffs — identified in legal documents as the Abigail M. Janko Share Trust and the Preston P. Joyes Jr. Trust — have homes. The plaintiffs live on opposite sides of the road near the beach access where Reynolds Street dead-ends and a sandy path leads to the water.

Even before the lawsuit, all was not well on South Beach. The plaintiffs have previously complained to the township about the beach becoming a “nuisance,” given its close proximity to their homes and the disrespectful behavior of visitors – with issues ranging from trash and unattended fires on the beach, to drunk and disorderly conduct from beach users, and even to trespassing and vandalism.

When they filed their lawsuit, the Janko and Joyes families took a new approach, contending that the road end – and therefore, the beach area – is not actually a public roadway or a platted road end, but rather an internal road within a platted development. “The plat dedication and title history that created the [plaintiffs’] properties make it clear that all of the land along Lake Michigan adjacent to the plaintiff’s property is private,” reads the lawsuit.

Complicating the debate is the fact that there used to be an intersection at the end of Reynolds Street. The bisecting road, Water Street, was vacated many years ago, aside from the intersection with Reynolds Street. That old intersection is where the road end is today, but the township and the road commission – in maintaining that the 60-foot-wide South Beach land is public – have argued that Reynolds Street actually extends down to the shoreline. Based on that argument, the path to the beach and the beach itself would both technically be public road. Members of the road commission have even argued at points throughout the dispute that, since the beach is technically a “road,” it should be treated as such and should only be used for ingress and egress (such as taking canoes or kayaks down to the water) rather than for other traditional beach activities (such as sunbathing, picnicking, or having bonfires).

The plaintiffs, meanwhile, claim that Leland Township and the road commission committed an illegal “taking of private property” by treating the land as roadway. The lawsuit claims the property is worth $600,000 and that the Janko and Joyes families should either be compensated (if the land is to remain public) or be restored title to the land by the township (thus rendering South Beach private property).

Talks between the plaintiffs, the defendants, and their attorneys ultimately brought about an eight-page proposed settlement, which representatives of both the Janko and Joyes signed on June 7. As part of the settlement, the plaintiffs are prepared to make two major concessions: First, that Reynolds Street is a public highway “that presently extends to the westerly line of the non-vacated portion of Water Street” – or to the roadway’s current end; second, that the 60-foot-wide piece of land west of the Reynolds/Water Street intersection “is subject to a permanent and irrevocable prescriptive easement…held by the Township for the benefit of the public and for use as a lakeside recreation area.” The settlement, in other words, would keep South Beach as a public beach.

In return for these concessions, the settlement outlines several restrictions that would be imposed on South Beach and anyone using it. It would limit hours of beach use between sunrise and one hour after sunset, require leashes for all pets brought into the easement area, prohibit fires and fireworks on the beach, ban overnight camping in the easement, restrict where beach visitors can park, and forbid the installation of public toilets, trash receptacles, or pet waste stations on the beach.

If the settlement were to be accepted, all its terms would “pass to any and all of the Parties’ respective successors in interest in perpetuity.”

The Leland Township Board voted in April to accept the settlement, thus authorizing Township Supervisor Susan Och to sign the document. The next month, though, the road commission tabled its decision on the matter, citing a desire to discuss the settlement further with the township.

Recent road commission meetings have drawn considerable public feedback about South Beach from locals, most of whom have been against the settlement. One sticking point among critics is a statute that would bar the township from placing dredging spoils “within the prescriptive easement or westward of the prescriptive easement.” Banning dredging activity, some beach users say, would make it impossible to refresh the beach and protect it from erosion, thereby dooming South Beach to deterioration over time.

What’s next? Even if the current settlement is dead in the water, that won’t be the end of the dispute. The lawsuit could potentially go to trial if all parties aren’t able to find common ground. For his part, Brendan Mullane, managing director for the Leelanau County Road Commission, expects the next step is more likely to be a return to the negotiating table to revisit the terms of the agreement. Litigation, he thinks, is something all parties should hope to avoid — the general public included.

“There is risk if [the road commission and the township] have to fight and prove that [South Beach] is a road,” Mullane says. “Roadways or highway easements don’t have any room for recreation, so if it really is a highway or a road commission right-of-way, then it can only be used for transportation – which means walking down to the water, and that’s it. I think that's what's at stake here, ultimately. The settlement agreement, the way it’s written now, preserves that space as a park easement for the township. To me, that's the most important part of the agreement. But there are quite a few conditions on there, and I think that’s mostly what the contention is coming from.”