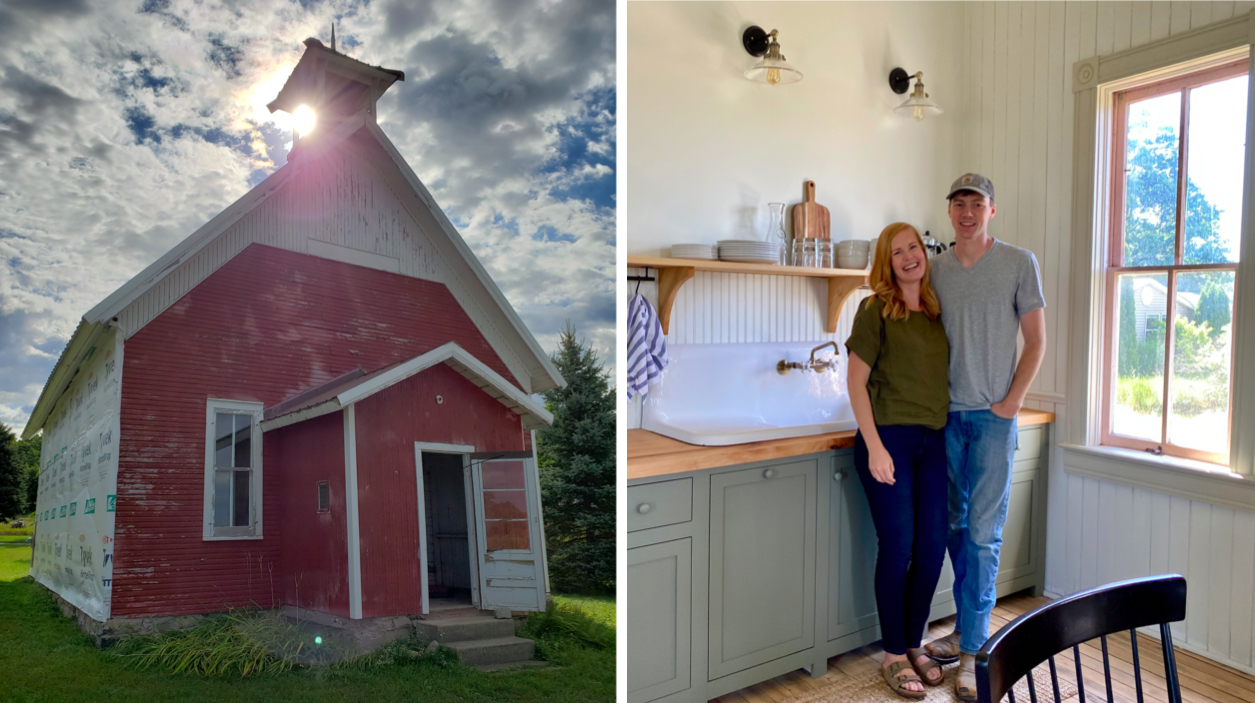 Behind-The-Scenes Look: The Rebirth Of A 130-Year-Old Leelanau County Schoolhouse

Those cruising by the corner of County Road 641 and Lakeview Hills Road in the heart of Leelanau County this July are witness to a historic moment unfolding — one piece of red siding at a time — as a young family restores one of Leelanau County’s remaining one-room schoolhouses. The Leelanau Ticker shares a peek into their progress:

Caleb and Ashley Herrmann bought the corner property in Elmwood Township — home to both their full-time residence and an 1890-era schoolhouse — in January of 2019. Even with three children all under the age of three, they decided to roll up their sleeves: “Renovations crawled along as a weekend thing at first,” shares Ashley, with Caleb adding that they have now kicked their efforts into high gear, with a completion goal of August 1.

The Herrmanns purchased what’s known locally as the Pleasant Valley Schoolhouse from the Brittons, whose family has lived directly across Lakeview Hills Road since at least the 1890s. Ashley explains, “they leased it for the school for 100 years; when the lease was over it reverted back to their property.”

The couple had a “dry run” on historic restoration in their first house, a 115-year-old traditional farmhouse in Kingsley. “We did a lot of work to the house in Kingsley but were looking for a couple years to move back to this side of town,” she says. “When the property became available and we saw it had a schoolhouse, that was the real draw.”

Explains Ashley, “We have always been passionate about restoring old buildings. Caleb is an electrician and does custom woodworking. I do architectural drafting, so we are both in the building trades.” She says the schoolhouse was “right up our alley” despite the toll the years had taken. There was paneling covering the original beadboard, the 130-year-old wood exterior siding was punky, the structure still had its old electrical, and zero plumbing. (Not to mention squirrels in the attic.)

Shares Caleb, “In 1942 they stopped using it as a school; they used it for 4-H meetings for a little while, then it was used for storage.” For now, the Herrmanns’ plan is to keep it as an accessory building on their property.

“We started a business called Schoolhouse Studio,” says Ashley, “with the mindset that — once restored — it could be an office or a studio.”

During renovations, they have consulted with Kim Kelderhouse, executive director of the Leelanau Historical Society. Kelderhouse tells the Leelanau Ticker that as many as 72 one-room schools once stood in Leelanau County and “my best guess is that about a third to as much as half are gone. Others have been moved or converted to houses.”

Kelderhouse also supplied the Herrmanns with a recording of a 1996 interview from the Leelanau Voices Oral History Project. Bertha Fisher Heimforth, born in 1907 on what’s now County Road 641, attended the school starting at age five. She recalled that there was a stove to heat the school (later replaced by a furnace) and a woodshed on the property that was wrecked in a tornado. The original desks were double desks, and portraits of George Washington and Abraham Lincoln adorned the walls. “It was run very strict, when your class was called up, you marched like you should; it was all very orderly,” she said.

Heimforth also shared a slice of close-knit Leelanau life: her daughter also attended that school and “when she started, she was so tiny, she spent her first year on her teacher’s lap.” Heimforth added it helped that she was good friends with that teacher.

Ashley says school records revealed all the teachers “were 17 or 18 years old, and once they got married they wouldn’t teach anymore.” She adds, “I wish I could step back in time and meet these people that spent hours of each day on this property.”

Many longtime residents in the vicinity, including the Brittons, are happy to see the Herrmanns are breathing life into this longtime landmark. Says Ashley, “There was some interest in the house when it was for sale, and people were inquiring about tearing the schoolhouse down. I think that was really hard for them to hear because it’s been in their family for so long. The Britton family goes back many generations.”

So does Ashley’s — four generations in Leelanau County on her mom’s side — and with a surprise plot twist: One of her own relatives, her grandfather’s cousin Dorothy Weiss, was a schoolteacher at Pleasant Valley Schoolhouse from 1935 to 1939.

“The neighbor brought over books filled with the history of the students and teachers and their contracts, and there was her name,” she says.

Other discoveries? Says Caleb, “In the attic, which was filled with pinecones, we found old marbles that were made of clay; and very old dominoes imprinted with the American flag.”

The couple have been DIY-ers on everything, save some carpentry work. Ashley adds, “we actually tried to hire out the work but with the costs, availability, and then COVID shutting everything down, we said we’ll just do it ourselves.” Her background meant she had the head-start of being versed in township permitting and regulations.

The passion project has been painstaking: “At every step, we didn’t want to hack anything. Taking all the siding off — that was not a fun plan — but we knew if we didn’t insulate it the right way there could be rot later, and we didn’t want to set up future owners or ourselves for that. For the exterior paint, we learned about a natural linseed oil paint from someone who is restoring several buildings in Europe. It doesn’t have any plastics in it or chemicals, and it doesn’t crack or flake. There were only two red options available and one matched perfectly.”

In restoring the floors, Ashely says, “I am not about making them look new…I want to see the nail holes and the scratches, they tell a story of all the life that’s been lived here.”

Caleb reused all the original schoolhouse lighting; coat hooks were salvaged and repainted. In adding a kitchen to the schoolhouse (pictured above), they “found a 1928 Kohler cast iron sink that came from a lake house in Omena on Craig’s List.”

For those who are curious about the progress inside, the Herrmanns are documenting every step on Instagram. They hope more schoolhouse history will reveal itself. Caleb shares, “the guy up the road stopped and said his grandpa learned English here. Whenever people stop by, I say, ‘we just want to make it last another 130 years.’”

They both add they would welcome anyone who may have historic photos of Pleasant Valley Schoolhouse to connect with them.

And now as they near the restoration finish line, they have Northern Michigan’s extended summer days on their side. Says Ashley, “The schoolhouse has amazing sunsets. I love being out here working at the golden hour…the whole place is just glowing.” 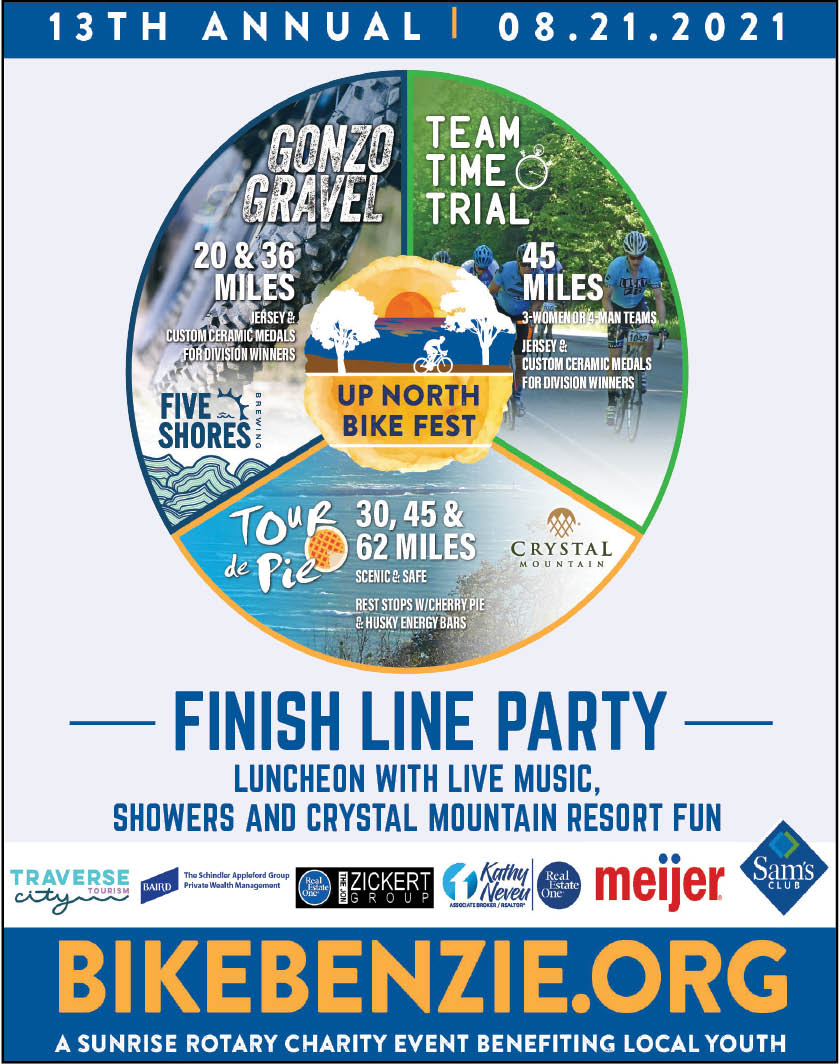