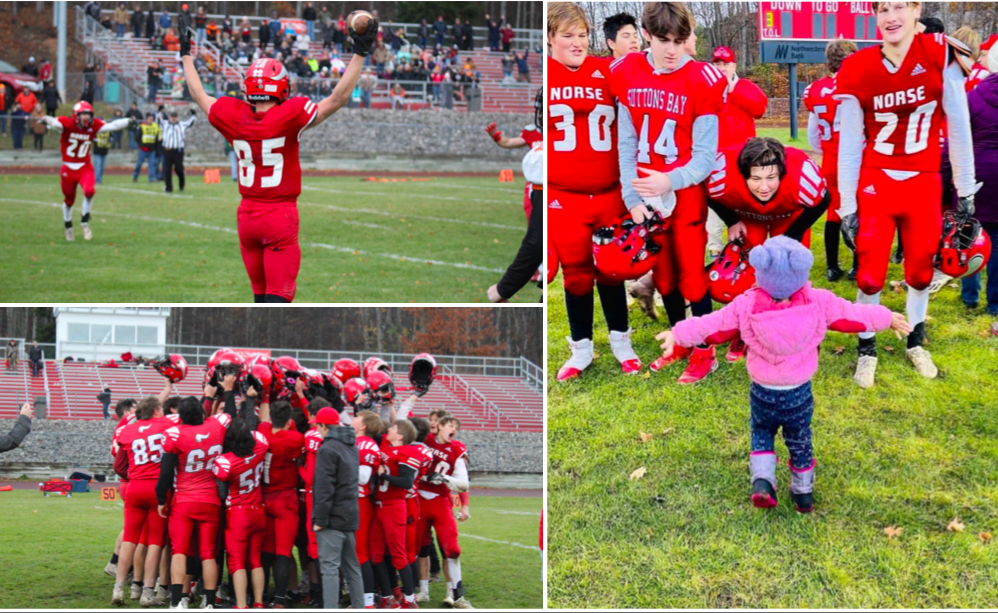 The Suttons Bay Norsemen football team — a St. Mary, Northport and Suttons Bay co-op program — is headed to the state finals for the third year in a row, with the greater Suttons Bay community rallying behind them on the road to get there.

The Division 1 title game is at 11am Nov. 20 at the Superior Dome in Marquette. The Norsemen face Adrian Lenawee Christian in a rematch of last year’s state finals, where Adrian came out on top.

The nonprofit Suttons Bay Athletic Boosters started a communitywide GoFundMe to ensure all players are able to make the trip and to support the team.

As of press time over $11,000 of the $10,000 goal was raised. “We are grateful for the people who have raised their hands to help — from putting up signs, to donating funds, to donating snacks for the bus ride. It’s a wonderful opportunity to come together for a common goal and show support for our kids,” says organizer Cynthia Opie.

Suttons Bay Superintendent Casey Petz adds, “The community support for our school and our student athletes has been amazing.”

Any additional funds raised over the booster’s original goal will support the needs of the football program, including new helmets and other equipment.

And how are the players revving up for Saturday’s title game? Norsemen head coach Garrick Opie tells the Leelanau Ticker, “It's a week filled with excitement, hard work, repping plays, film, conditioning, and visualization. I am very excited for the young men on the team and the community. We deeply appreciate the outpouring of support."

In that spirit, a spectator bus will also make the trip to the “Yooper Dome” — a.k.a the world's largest wooden dome stadium — on the campus of Northern Michigan University. And a football send-off party is planned for Friday morning at 8:45am, with families and community members invited to don red and white and line up in a designated area in the Suttons Bay High School parking lot to cheer on the Norsemen as they board their bus.

Supporters can also line the street downtown, as the bus will pass through the village on its way out of town.

A live feed of Saturday’s game is in the works. Follow Suttons Bay Football for details.