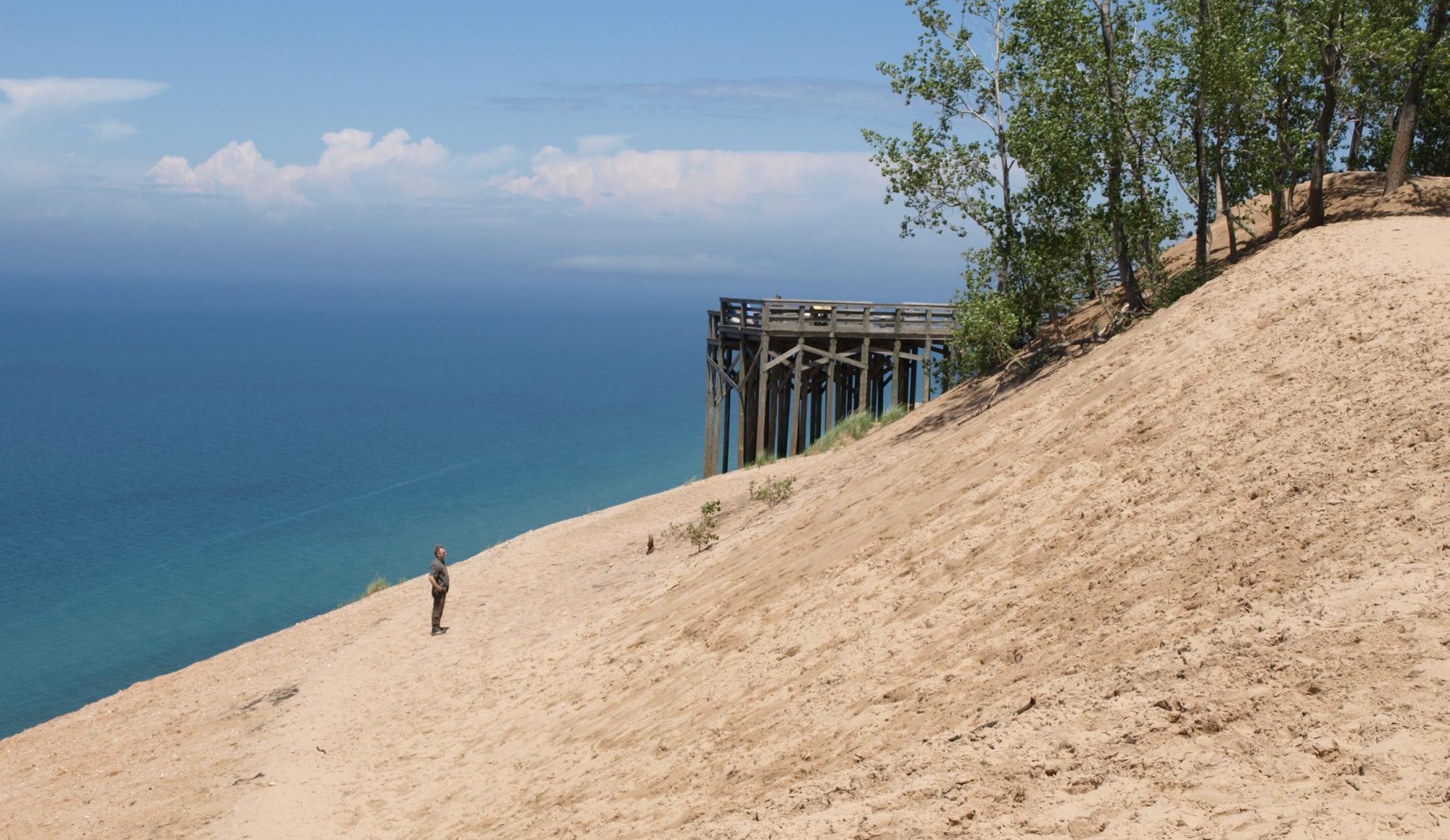 Don't Get Caught At The Bottom Of The Dune

The Sleeping Bear Dunes Preventative Search and Rescue team -- a group of volunteers issuing words of caution to adventurous Dunes visitors -- has cut the number of emergency calls from weary visitors unable to climb back up the steep dunes by 85 percent.

“I’ve been part of the program since it started four years ago,” says Kerry Kelly. The former chair of the Friends of Sleeping Bear says the park service came to his organization with an idea.

“It started with our law enforcement rangers,” says Scott Tucker, superintendent at Sleeping Bear Dunes National Lakeshore. “We were trying to come up with a solution to the number of calls.”

Each summer, the number of emergency calls to both the park and the Glen Lake Fire Department’s Empire station was increasing, taxing the ability of the organizations to respond and to provide the other services it was charged with. Most of the calls were from the Dune Climb where visitors would climb up the dune and down to Lake Michigan, or the overlook at number 9, where they could leave the car and climb down to the sparkling waters below.

Trouble is, at both those places they would then have to climb back up. For some it was too far, for others too taxing, and some just found themselves hungry and thirsty, resulting in emergency rescue calls.

Tucker says they looked at how other groups across the country handled such needs, and that’s when they approached the Friends. The rangers told the Friends how volunteer groups across the country worked with local authorities by warning visitors of the potential dangers and how to avoid them. By making sure the hikers knew what they were up against, they could perhaps solve the problem before it ever happened.

Kelly says the Friends decided they could and should help. “The rangers are not a large staff. They said they had a high load of 911 calls and requests for search and rescue,” says Kelly.

Thus was born the Sleeping Bear Dunes Preventative Search and Rescue team. Volunteers head out to the two spots and talk with people, making sure they are aware of what awaits should they choose to challenge themselves to a long walk up and down the dunes – and then back up again.

The word “preventative” is the key. Kelly said they typically station one volunteer partway down the hill at the overlook, while at the Dune Climb one is partway up the hill while another circulates through the parking lot. He says they have conversations with the visitors, asking if they have the right equipment, the right shoes, and water and snacks. The Friends volunteers make sure to inform visitors of the challenge of walking back up the hill when they get tired, and warn against running down the sandy slopes, where they could injure themselves or others.

“We walk around and talk to people. It’s a very friendly interaction,” says Kelly. “At the Dune Climb, people who want to walk to Lake Michigan have no idea how far it is. They go up halfway, then they’re tired, hot, carrying coolers or surfboards. We give them alternatives,” he says.

For those who might want to look for something else to do, the volunteers are ready with suggestions, such as checking out Sleeping Bear Point or North Bar Lake, where they can easily hike over the small sand dune between the lake and Lake Michigan.

Bryan Ferguson, the fire chief at Glen Lake Fire Department’s Empire station, says the program has made a huge difference. “It’s cut our responses by some 80 percent,” he says. “It’s gone from a few (calls) a day to a few over the summer.”

Kelly says the numbers have dropped from around 60 when the program was launched in 2017 to nine last year. “Over the last four years it’s been reduced every year.”

Tucker applauds the effort. He says the expectations of visitors are more realistic and informed, providing a better experience for them. “They know what they’re getting into.”

He says it also allows his staff to concentrate on the other tasks before them, only getting interrupted when it’s really necessary. “We have seven (eight in the summer) law enforcement rangers and 70,000 acres we patrol. It eliminates the non-emergency calls.”