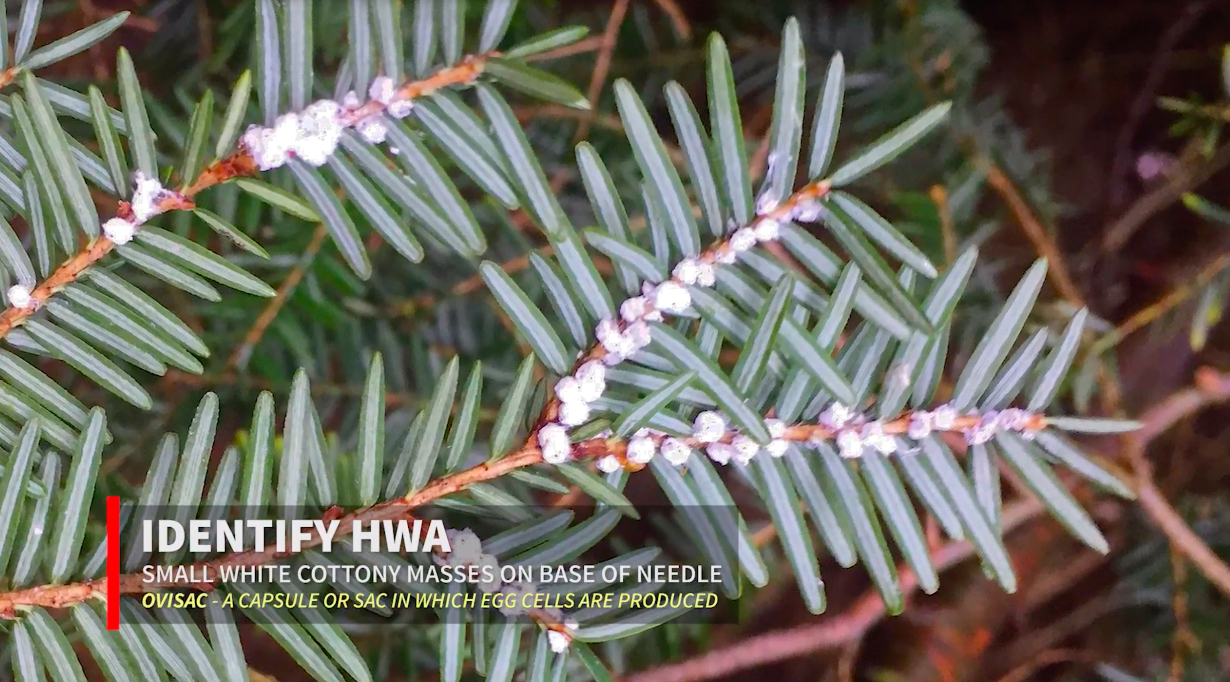 The aphid-like insects situate themselves at the base of hemlock needles and feed off the trees’ nutrient supply. Up close, its ovisacs look like balls of spun cotton and may appear alone or in clusters. Hemlock woolly adelgids uses their long, siphoning mouthparts to extract sap from hemlock trees. Their feeding weakens needles, shoots and branches. Over time, tree growth slows, and trees take on a grayish-green appearance. Without treatment, infested trees die within four to 10 years. Right now, in the Appalachian Mountains, entire swaths of forest appear to be brown as dense hemlock stands become fatalities to the hemlock woolly adelgid.

The invasive insects can cause significant harm to Michigan’s hemlock resource, estimated at 170 million trees. Hemlock is a component of northern Michigan’s forest ecosystem for wildlife habitat, and along rivers it offers shade essential to the health of area fisheries.

In October 2020 they were detected in Ludington State Park, 70 miles south of Sleeping Bear Dunes. National Lakeshore staff began surveying high-use areas throughout the park in January with support from the Great Lakes Restoration Initiative. The survey crew worked alongside a team from the Northwest Michigan Invasive Species Network (ISN), which has been surveying hemlock trees within five miles of Lake Michigan since 2018 as a part of a Michigan Invasive Species Grant Program early detection project.

Since the initial detection at the National Lakeshore Feb. 4, crews have completed a survey of all hemlocks within an 800-foot radius of the infested tree as well as a grid search of the broader vicinity, finding no additional infestations so far. Partners are making plans to treat the infested tree and other nearby hemlocks in spring 2021.

If your home or land falls within ten miles of Lake Michigan shoreline in Leelanau, Benzie, Grand Traverse, or Manistee County, you are encouraged to complete a survey that can be found on ISN’s website. The ISN encourages all Leelanau landowners with hemlocks to keep a watchful eye on them and if they begin to look sick — gray-tinted needles, needle loss, and branch dieback — contact ISN’s Invasive Species Specialist, Audrey Menninga, amenninga@gtcd.org or at 231-299-0786.

Residents spending time outdoors this winter can also help look for and report hemlock woolly adelgids by looking on the undersides of hemlock branches for evidence of round, white ovisacs near the base of the needles (pictured). Infestations can be reported to the Michigan Department of Agriculture and Rural Development at MDA-Info@Michigan.gov or 800-292-3939.

According to the release, hemlock woolly adelgid likely arrived in Michigan on infested nursery stock from northeastern states. Though the tiny insects don’t move far on their own, they can be blown by wind or “hitchhike” on birds or mammals that come into contact with an infested branch. Cars, boats, or RVs parked under infested trees can also transport the insects to new locations.