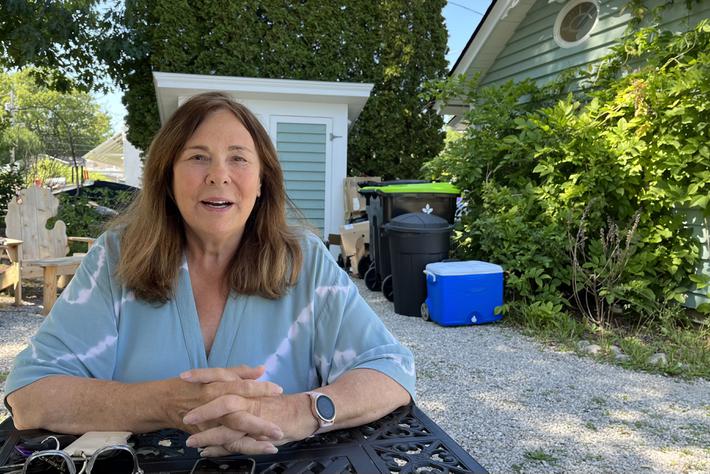 Candy Crowley interviewed presidents, senators, celebrities and world leaders, moderated the 2012 presidential debate between Barack Obama and Mitt Romney, and hosted her own shows during her decades on CNN. She left the cable channel in 2015, just prior to the 2016 presidential election. Now — from her summer home in Glen Arbor — Crowley has some distinct views on politics, journalism, and the upcoming presidential election. Our sister publication The Ticker sat down with her over coffee to hear more.

Ticker: Last many of our readers would have seen you was on "State of the Union" on CNN and as a presidential debate moderator. What’s new since then?
Crowley: I joined Harvard right after I left CNN on a fellowship, and I taught a class during the election year. That kept me busy that first fall without an election since Reagan, so it made sure I didn’t have withdrawals. It happily filled my need to talk politics. I’ve been doing some ghost writing for people, and I am writing a book. I want to write fiction, and I have plot in my head. But I trust my skills as reporter, but not so much as writer. My admiration for people who write novels is just sky high. It takes way more discipline than I expected.

Ticker: And you go back and forth between here and DC?
Crowley: Yes, and every year it’s gotten a little more on the here side. I’m drawn to both places and privileged enough to have a place to sleep in both. I say I’m going to just stay here and I’d be crazy to go back [to Washington], but then I get there and of course love it. They’re just such different places but I love both.

Ticker: Remind me how you ended up here.
Crowley: I’ve been here more than 60 years. I was born in Kalamazoo but grew up largely in Missouri. My grandparents had a place on Elk Lake, and we’d visit grandma and grandpa there every summer. One day my parents went on a drive and came upon this area and Sleeping Bear Bay. Our family home survived the park [creation of Sleeping Bear National Lakeshore], and every summer has been spent here. My dad went to camp Leelanau and I went to Camp Kohahna.

Ticker: We both lived in DC at the same time. I just love the energy in the air. I assume it’s the same for you?
Crowley: Yes, the energy and the conversations. Of course the dominance of politics. Here the conversations are about water levels, which I enjoy and want to learn more about, but Washington is just such a cool town. I’ve been there since college, so it’s home. If you can drive into DC and not get breathless, you’ve lost your soul.

Ticker: So curious to hear your thoughts on the state of politics and the media. When you left there were Paul Ryan and John Boehner and George Bush and Ted Kennedy and now it's Biden and Trump and Schumer and Meadows.
Crowley: Right. Well, Biden I’ve known forever. McConnell was there when I was there. So I know many of the principals, and I had known Trump a bit; I had interviewed him on other things over the years. Weirdly, Jared [Kushner] and Ivanka [Trump] are transcendental meditators, as am I, so knew them casually from some retreats pre-dad running for president. But yes, it’s very different there now, and I knew the media was changing when I left…

Ticker: The mutual respect is gone, right?
Crowley: Yes, that’s gone. What changed things for me in politics was when everyone began to prescribe motives to positions. “He hates old people because he cut social security.” I always felt when I was there that many people came to Washington to do good things.

Ticker: And it’s not an easy life. Most of those people can certainly make more money and have a quieter life doing something else.
Crowley: Right. It’s always been that way. Think about Ted Kennedy; he could have made so much money doing anything else, and he took so much abuse. But he stayed, and he actually became one of the most effective lawmakers of the 20th century. The assumption used to be that people were good, not evil. There are differences of opinion, and then there’s “you’re wrong.” It’s just so harsh and mean, and I don’t think any one thing did that. But I think back to [former Senators] George Mitchell and Bob Dole. They were practical politicians.

Ticker: And of course compromise is a dirty word now.
Crowley: Compromise now means "you agree with me.” I’ve told students when I give speeches that you cannot find middle ground until you understand where the other person is coming from. I’ve been fascinated by [Democrat] John Lewis and [Republican] Herman Cain. They both were young and black with similar upbringings in turbulent times for civil rights. When I interviewed him, Cain talked about how he cut own hair still and still did, and I had asked him why. He had said at one point he was in a barbershop in Alexandria [Virginia] and never got called up from his seat for the haircut, even though the barber was black. The barber pointed to another shop that cut black men’s hair down the street. And Cain said he got up and walked into Sears, bought his own clippers and cut his own hair ever since. And then John Lewis, a walking/talking hero, grew up protesting and attending all those sit-ins. Cain learned how to beat the system, while John Lewis found ways to fight the system. So their backgrounds informed their judgements and their political positions.

Ticker: And what about the media, or CNN specifically? You were there under [Jeff] Zucker. It’s just become so much more analysis versus straight news.
Crowley: I know a lot of really good journalists there, though many I worked with are gone. I just got the sense it really changed during the Trump election.

Ticker: I just see people like Anderson Cooper and Jim Acosta literally laughing at the president on TV. That’s just not the kind of news anchor I grew up respecting.
Crowley: Yes, I know. I will always defend CNN. I was there 27 years. The parts and the individual people are good, but somehow the whole takes on a different complexion. I say the same thing about Congress. But I now get 99 percent of news from here [points to laptop]. I subscribe to the Washington Post, New York Times, LA Times, Chicago Tribune, and many others. I just love local news. So many local outlets are being folded in or sold or gutted. The best news is on the ground where you are. You know that! A local paper or site like yours.

Ticker: It’s difficult at places like CNN or Fox or MSNBC because they’ve become so dependent on the analysis and entertainment.
Crowley: Yes. I hope there’s a turnaround. And there’s so much media; I’m all for more media, but of course people now are just watching the media they like. So there are two sets of competing facts. I think that started to change when news had to be profitable. The birth of infotainment.

Ticker: So which would you say you are more optimistic about in the next 8-10 years, politics or journalism?
Crowley: Well, they are kind of attached. I’m hoping pendulum swings back. But I think the public has to change first in some ways. CNN, Fox, the networks…they will have to convince the other sides that they are the one telling the straight-up story, and people will have to want and recognize straight-up news.

Ticker: That sounds kind of similar to what you said five minutes ago about politics and understanding where others came from.
Crowley: Exactly. And I can’t vouch for who’s coming up in journalism. There was one person in a class once who came up to me and said, “I just want to be on TV.” I told her, “That’s just a medium. Journalism is journalism.” Still, I suppose I have more hope for journalists than politicians, but that’s probably because I”m a journalist!

Ticker: Any dark horse candidate in 2024 outside of the big four of Biden, Harris, Trump and DeSantis?
Crowley: I always look to the farm system, which was always the governors. That’s where you got Reagan, Carter, and Bush…and I don’t at this point see any others than who you’re talking about, but I’m not watching as closely as I should be. [California Governor Gavin] Newsom would be an interesting candidate.

Ticker: What about any women?
Crowley: That’s what I keep hoping! Michigan's governor has a lot pushback because of the way she handled COVID, so you wonder how that would translate nationwide if she gets reelected.

Ticker: What about [former U.N. Ambassador] Nikki Haley?
Crowley: Yes, she has a great background, and she’s far enough away now from Trump. But what’s this election going to be about? We don’t really yet know.

Ticker: How about [Transportation Secretary] Pete Buttigieg?
Crowley: Who knows. [Vice President] Kamala [Harris] is going to have to defend her own image and Biden’s image if he doesn’t run, which I am not necessarily predicting, by the way. But I must say, the 2016 election got me out of the prediction business!