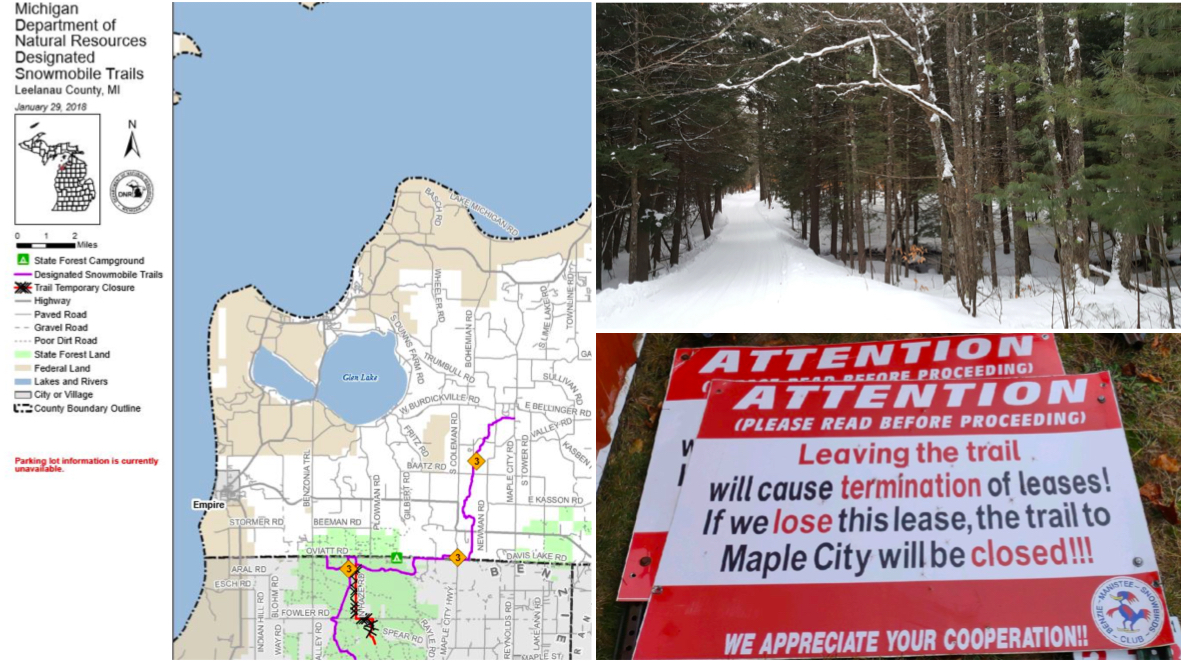 Michigan snowmobile trails officially opened this week, but a critical section of trail in Leelanau County won’t see any sledders this season. Despite numerous warnings and “stay on the trail” signs, snowmobilers have lost the groomed trail connector to Maple City due to trespassing issues.

The segment of Trail 3 is part of the Benzie-Manistee Snowbirds Club’s trail system and crossed into Leelanau County, running about 14 miles to Maple City. It was the only trail designated by the Department of Natural Resources in Leelanau County. The Benzie-Manistee Snowbirds Club — founded in 1968 — maintains the trail system, which also connects to Cadillac, Irons, and Wellston trails. Members and volunteers post signs, brush the trails, and groom during snowmobile season.

“We’ve been running to Maple City for well over 20 years,” says Mark Coe, club president. “It’s an awesome section of trail, and on the north end of the system, it gets you up to fuel.”

But a Leelanau County land owner had enough of snowmobilers who ignored signs and rode through his wheat fields and pulled the lease in mid-November. “He saw snowmobiles running down a fence or driving past a sign and driving out in the field,” Coe says. “He finally said ‘enough is enough.’ It is private property, and it is his right.”

Locals might find seasonal roads and work-arounds to Maple City, but the trail closure is a hit for snowmobilers who staged in Maple City or visited the Benzie area to ride the trail system. The club works with private landowners to secure land leases for snowmobile season, which officially runs Dec. 1 to March 31. This particular landowner owns about a mile stretch of the 14-mile segment, which shut the whole trail down.

Club officials have been working on a reroute, but it’s too late to do anything for this winter. Now, the trail will end at the Benzie-Leelanau County line.

The club has added a staging area on the south side of Empire Airport, near Osborn Road and County Road 677 (Benzonia Trail), but the Maple City trail gave snowmobilers in Benzie and Manistee counties a destination to the north and access to gas and food. It also allowed snowmobilers in Leelanau County to park and ride from Broomstack Kitchen and Taphouse, linking the pub and eatery to 160 miles of Snowbirds club trails in three counties and other trail systems.

“We both appreciated and enjoyed the snowmobilers,” says Stephen Brotschul, a manager at Broomstack. “We loved being a staging area for the riders. They were both respectful and fun, and they would come in for food as well.”

The Maple City trail closure means snowmobilers will have to ride to areas within a tank of gas or fuel up in Copemish, Thompsonville, Beulah, or Honor. Accessing gas stations in Honor and Beulah can be difficult without snow on the roads and alleys. “The biggest issue is food and fuel and the small businesses it’s going to effect,” Coe says.

Broomstack, housed in Maple City’s old schoolhouse, also hosts Leelanau Curling Club in the winter. But Brotschul says snowmobilers also brought in business on winter weekends to help sustain the restaurant during the off-season. “We do rely on their business,” Brotschul says. “We hope that something can be done to connect the trail from there to here. It’s wonderful for the community and our local businesses, and it also brings a great number of people up to our area.”

Brotschul says locals will likely find other routes but it will cut off snowmobilers who travel from other areas, some as far as Cadillac, to stage there. “We are the northern tip of this trail system,” he says. “You start or finish here, so we’re definitely a destination.”

Brotschul also praised the efforts of the volunteer club. “People have been coming up here for years. The Benzie Snowbirds take care of things. They groom the trail and check it throughout the course of the year. They have been very respectful to our business. For a little organization, they work hard to connect our area to the rest of the world.”

Maple City’s Pegtown Station owners Dave and Mary MacDonald have run the café for 17 years and say while snowmobilers aren’t as critical to their business, they welcome snowmobilers to the village. “I think it’s great for this area to be honest with you,” Mary MacDonald says. “I felt disappointed when I heard it wasn’t going to happen this year. We would get some families on Saturday or Sunday who would come in for a nice lunch and warm up and go to the gas station.”

She notes that she sees the landowner’s stance. “I feel we should respect our neighbors and people’s property.”

In Benzie County, Trail 3 winds through wooded scenery that is mostly on state forest land. The trail then runs along County Line Road, crossing onto private property to Maple City. The club marked the trail through the fields with numerous trail markers, traffic signs, snow fencing, and warning signs. The club announced the closure in a Facebook post: “It only takes a few to wreck what we’ve been working for. The extra signs and snow fencing to keep people on the trail were all removed today. The land owner has finally had enough and had pulled their lease.”

“We had to take all the signs down to not give people the perception that it’s open,” Coe notes.

Some are worried the trail closure will cause confusion among riders or more trespassing issues. Snowmobiles aren’t allowed on the shoulder of roads like highway M-72 or National Park roads, Coe says, but other Leelanau County roads are open to snowmobile traffic.

“There just needs to be more respect out there for the trail systems for us to be able to maintain them,” Coe adds.