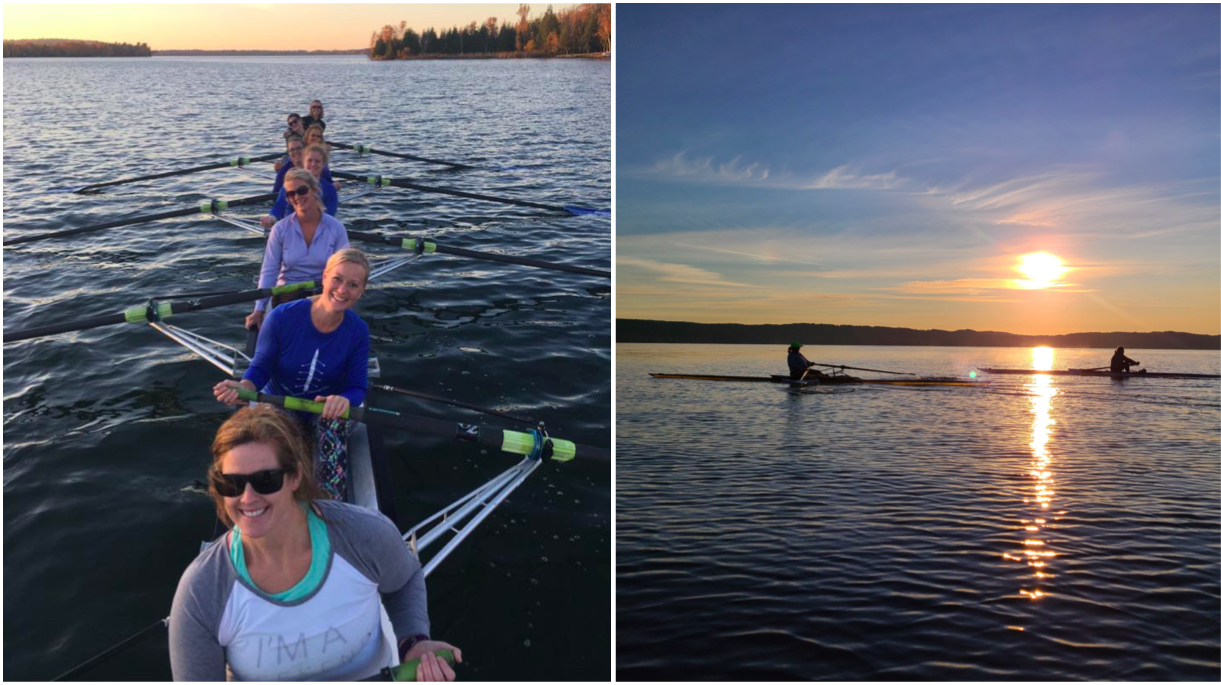 The long, skinny boats of the Northern Michigan Rowing Club (NMRC) now have a second lake in the county to call home. The NMRC — not to be confused with the Lake Leelanau Rowing Club headquartered at Fountain Point Resort — debuted last year on Big Glen Lake. Now it is expanding to a second site at Solon Township Beach Park on South Lake Leelanau, while it continues its program at the Glen Lake Yacht Club. “We’ll have boats at both,” says founder Melissa Dow.

Dow started the organization in 2020 as a nonprofit. She was able to find fellow enthusiasts and get the organization up and running, er, rowing. The NCRC’s numbers have expanded to approximately 50 members, including 20 to 30 who plan to row at the new location on Lake Leelanau.

Dow’s interest in rowing goes back to her teen years. “My mom started rowing when I was 14 and she was 40. She’s almost 80 now, and still rowing.”

She started working with Traverse Area Community Rowing, TACR. “That made me fall in love with it again,” she says, adding, “… I didn’t realize how much passion I had for it until I got back into it.”

Why do it? For starters, the health of it. Dow extolls the virtues of rowing as a well-rounded exercise. “You use 90 percent of your body [muscles], it’s low impact, you keep healthy.” Best of all, you’re “out on the beautiful water,” Dow says.

Fellow enthusiast Susan O’Connor of Solon Township has been rowing for about ten years, and says it provides camaraderie. “It brings people together. We’re in love with the sport. It’s recreational, it’s social, it’s healthy,” she says.

Mindy Hawley of Maple City is, like Dow, a returnee to the sport. “I rowed in my 20s,” she says. A visit to Fountain Point Resort with a girlfriend for a concert rekindled her interest. She observed the watercraft there and it reminded her of how much she’d enjoyed it. She soon found herself back on the water.

Now, about the watercraft: These are not anything like your average rowboats or kayaks. The slender boats float just above the waterline, and start — yep, start — at 30 feet long for a single. Those for four people can run in excess of 40 feet, and the eight-person craft exceed 60 feet.

Which means it’s definitely a team sport. You typically need a group not only to row and pilot them — the eight-person craft also include a coxswain (pilot) — but you need a group to haul them to and from the water. Even that means teamwork. “I’m 5’11” and some are 5’5”. You have to adjust,” says O’Connor.

This year the organization added four more boats: an eight, two fours and a quad, as well as a large trailer to haul them all. This gives the club a total of 11 boats, which provides the opportunity for as many as 29 people to row at once.

“We are now able to offer both the big boat, single oar experience, and the smaller boat two-oar experience,” notes the organization’s website. For the uninitiated, that’s sweeping (meaning each person uses one oar) and sculling (when each person uses two oars). “That’s part of the fun. It has its own language, its own culture,” says Hawley.

As might be expected, the boats are not inexpensive, though Hawley says cooperation among the many clubs nationwide means that older, used models are often offered to nascent organizations such as NMRC at a reasonable cost. Some of the members own their own boats, which they provide for club use.

The members of the group are eager to bring in more like-minded folks. Anyone interested is welcome to a Learn To Row event, or you can attend the first NMRC Social May 22 from 5-7pm at Broomstack Kitchen & Taphouse in Maple City. All rowers must go through an “Experienced Rowers Review” before signing up for sessions.

“It’s so exciting to have Solon Township board be willing to host us. The community too was very supportive at the meetings,” says Hawley. The township agreed to allow NMRC to build and keep boat racks onsite at Solon Township Beach Park, east of Cedar. Now both Glen Lake and Lake Leelanau will host morning and evening rowing though fall with session start and end times based on sunrise and sunset.

Taking place right now is Pull Together 2022, a campaign to support the organization and its rowing programs. An anonymous donor has offered to match, dollar for dollar, every donation NMRC receives by June 1 up to $10,000. Funds raised will be used to promote and provide recreational and competitive rowing opportunities. Dow says the organization still needs safety launches, additional oars, and racks for its boats.

Dow says the future may include expanding to other lakes. Because who doesn’t like good exercise when it’s combined with fellowship and a beautiful time on the water? “Most people who are rowing are nice people,” laughs Dow.