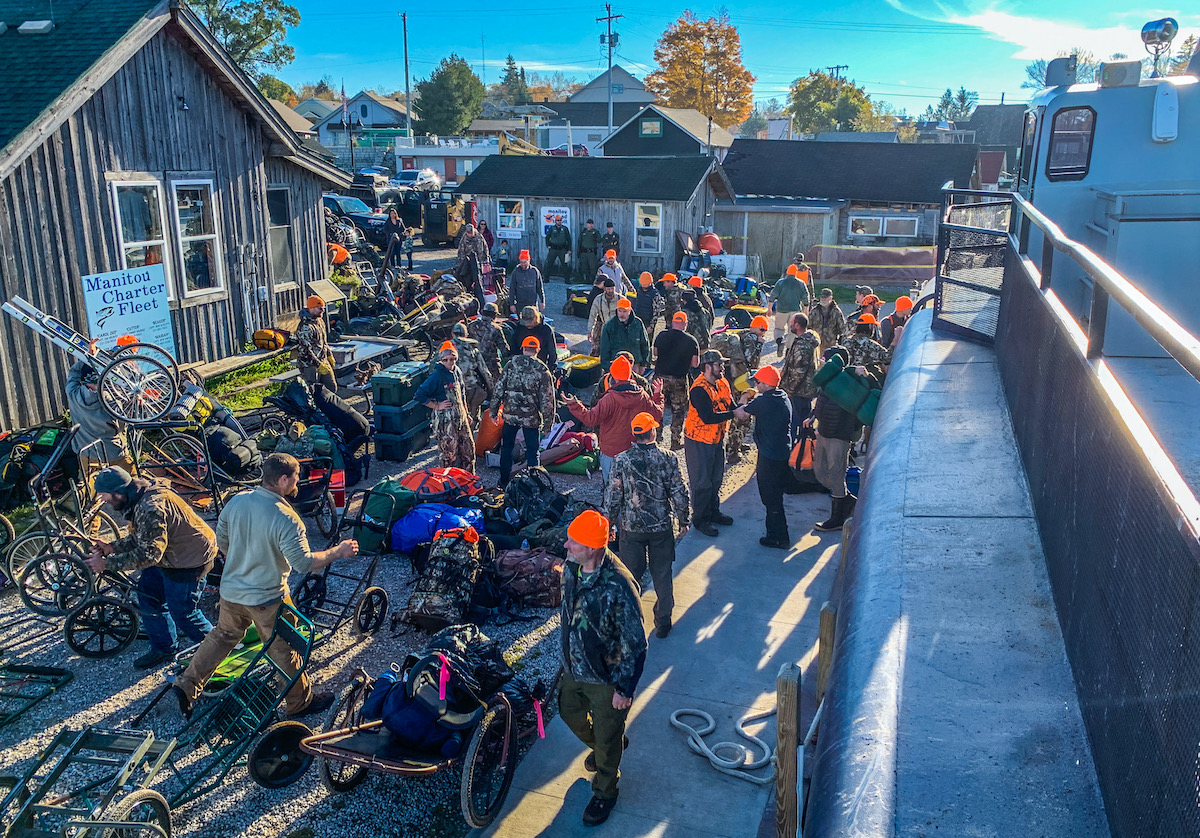 While whitetail firearm season opens Nov. 15 on Leelanau's mainland and across the state, the hunt is already a wrap on North Manitou Island. This year the one-week special hunt ran Oct. 30 through Nov. 6, with the goal to control the deer herd and preserve the natural vegetation. (There is no season on South Manitou as there are no deer on that island).

Sleeping Bear Dunes National Lakeshore Chief Ranger Phil Akers says this year there were 160 deer harvested by the 196 hunters who made the trip with their guns and gear on Manitou Island Transit’s Mishe-Mokwa. That's the most hunters on the island since 2000, when 176 hunters made the trip. Contrast this to 1985, when first official special hunt was held on the island, with regulations and bag limits in effect. That year there were 5000 applicants for the hunt, with 556 hunters heading to the island and harvesting 825 deer.

The Michigan Department of Natural Resources report says deer numbers look very good for 2021, and for many hunters, Leelanau is the place to be. Brad Fosmore of Glen Arbor is one of them. “I was like 14,” says Fosmore of his first hunt. “Dad set me on a big woodpile. The first time out I shot a buck.” It’s a family tradition he’s now passed on to his son Joey. “There’s nothing like the rush of a buck coming at you. Your heart’s pounding. It’s still so fun,” says Fosmore.

Though she can’t claim to have shot a buck on her first hunt, Tara Miller can make another claim to a first. “I started at 12. You could do that back then,” she says. Though she now lives in Lake Ann, she grew up in Cedar as one of six siblings and still hunts in that area. “My parents are still there. I’m one of six with lots of boys and love the outdoors.”

That’s a common theme throughout the area. Many of those who grew up in Leelanau County still hunt there, no matter where they now live.

Many of those who grew up in the area have family or friends on whose land they hunt. Others opt for public land, such as the Sleeping Bear Dunes National Lakeshore. Akers says the deer herd in the park is typically bountiful. “It’s a beautiful place to hunt. We’ve got really healthy deer in the park,” he says.

While there is no additional permit needed to hunt in the National Lakeshore (with the exception of North Manitou Island), there are certain rules and regulations to follow. Most high-use visitor areas are off limits and include a 450-foot safety zone. Hunting is prohibited at campgrounds, picnic areas and other such areas likely to be occupied by non-hunters. Marking trees or blazing trails is also prohibited.

Hunting is also allowed on certain properties owned by the Leelanau Conservancy. There are five properties open to deer firearm season: Cedar River Preserve, Houdek Dunes, Kehl Lake, Krumwiede, and Palmer Woods. “We do require all hunters to fill out a permit to hunt on our properties, and they can do so directly on our website,” says Becky Hill, director of natural areas and preserves.

“We allow hunting on many of properties and are happy to do so as it is an important form of recreation for many of our members and community. All Leelanau Conservancy properties are threatened by deer through over-browsing of our wildflowers and tree seedlings. Managing white-tailed deer populations through hunting is an important step in reducing deer damage and protecting the biodiversity of our natural areas.”

What’s likely for this year? One factor in favor of a larger harvest this year is that last winter was not particularly cold or snowy, leading to a greater number of deer surviving. A report from the DNR says the winter of 2020 didn't seem to have adverse effects on the deer herd in the Northern lower peninsula due to fewer periods of extreme cold and an overall shorter winter. Another important factor that ensured winter survival was that forest management practices (new growth of young trees and leaving treetops from harvested trees) provided plenty of winter browse for deer throughout the winter.

“There was a very good survival rate,” says Steve Griffith, wildlife biologist with the DNR, who operates out of the Traverse City office.

That held true for the 2020 hunt, as the previous winter was also mild. According to the report, last year the Northern lower peninsula saw an estimated harvest of 135,906 deer, which was up seven percent from 2019. While buck harvest declined about from 68,168 in 2019 to 64,725 last year, antlerless harvest increased by 21 percent, with over 12,000 additional antlerless deer taken in 2020 than in 2019. “There was a moderate increase in the lower peninsula as a whole, including Leelanau, in the number of does shot,” Griffith says.