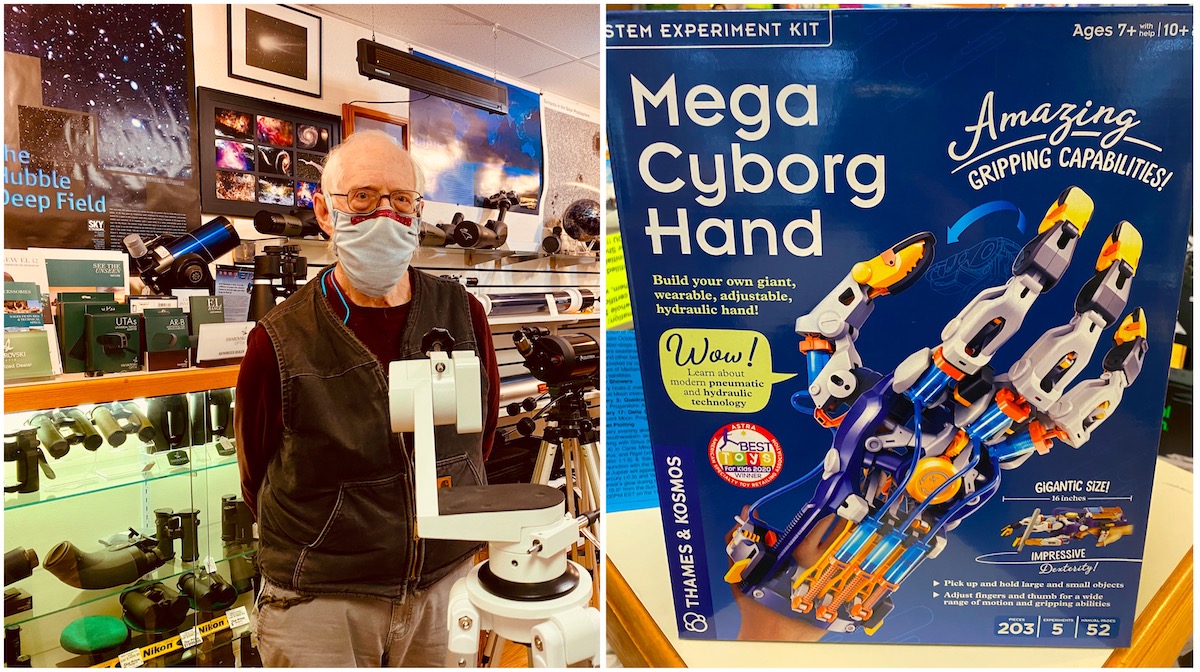 For those seeking a closer inspection of the fossil they found on the beach or are curious about February’s nightlife (of the comet and constellation variety), Dick Cookman is the man to know. Cookman is a retired NMC professor (1970—2000) of astronomy, geology, and environmental science and has run Enerdyne, the science and nature store in the village of Suttons Bay, for 40 years.

He says he still has former students stop in to discuss things with him, and what he loves most about his job is giving the uninitiated opportunities to learn that science is actually fun. Case in point, the shop’s most requested item to keep in stock this winter: the Mega Cyborg Hand, a build-your-own giant wearable hydraulic hand.

It’s only natural that a former astronomy professor — who taught his labs from the Rogers Observatory in Traverse City — also stocks an optics department with telescopes and night vision devices. He’s hooked up the newest generation of birdwatchers with binoculars, and helps farmers with weather instruments that tell them what’s happening right out in their orchard, not at an airport 40 miles away. We caught up with Cookman to hear about what it’s like to be the region's go-to science guy.

Leelanau Ticker: What was your goal when starting the store with your wife Pat?
Cookman: It was first called Enerdyne Solar & Wood and originally focused on energy conservation. We had a solar kit for heating your hot water tank and many other energy conservation devices. The solar hot water kits took off, only people didn’t want to build it themselves, so we did installations. We also sold woodstoves, like the Norwegian Jøtul, and became the largest dealer of woodstoves in the region.

Leelanau Ticker: So, when did Enerdyne start carrying things like microscopes and responsive robotic hedgehogs?
Cookman: In the late 1980s we went to a wood energy conference in St. Louis. We were going around the city in the evening looking at various stores. When we got back to our hotel, Pat and I observed that all the places had been associated with nature or science. We said, ‘let’s bring some of that into the store.’ Then the nature and science stuff chased the woodstoves out. I also had students in my astronomy class in the 90’s complaining they couldn’t find a decent telescope, so we added telescopes to our repertoire, and binoculars. They became the important part of the business.

Leelanau Ticker: Have you been able to share your knowledge with amateur astronomers?
Cookman: I retired in 2000, but in reality, I never left teaching. The whole goal here is that science IS fun. So many kids after going to their science classes which are focused on vocab and book learning, never find out that science is experimenting. It’s playing. You know what you call a person who ends up playing with stuff their whole life? A scientist.

Leelanau Ticker: You have three Suttons Bay High School students — who are also on the Norsemen Robotics Team — helping out right now in the store. What a great fit to have young scientists as employees…
Cookman: Yes, we are a supporter of the robotics team, and, as you probably know, it’s almost impossible to find employees. We had a very superb staff, but they were all older, and when COVID came along they didn’t want to be in a store working with the public. So, they left, and it was Lori [Flees, longtime staffer] and I who remained. When those three young ladies, plus a teacher from Leelanau School came along this summer, it was integral. This ended up being the best year that we’ve had, businesswise.

Leelanau Ticker: Leave it to a scientist to install one of the first virus-destroying ionization systems in the county.
Cookman: In June, before we would open for the season, we took that major technological step toward safer air. We hired D&W Mechanical of Traverse City who installed Needlepoint Bipolar Ionization equipment in our HVAC system. The hydroxide ions destroy viruses by removing hydrogen from the coating of the virus, causing it to disintegrate. The ions go out like a little PAC-MAN to destroy viruses.

Leelanau Ticker: Are you a dark sky advocate?
Cookman: It’s said 75 percent of people on the planet can no longer see the Milky Way from where they live. One of my students, who went on to get his doctorate in astronomy is now the astronomy professor at NMC, Jerry Dobek. He has played a role in the International Dark Sky Society. If you go back 200 years, you could see the Milky Way from the streets of New York or London, because that was before electric light. If you get outside of Traverse City and look back you can see an orange dome. That’s called ionized oxygen skyglow. It's as simple as putting a shield on lights so you can’t see them from the side, and all that light points down. You can reduce the size of the bulb because you are no longer trying to light up the moon. You reduce the use and cost of electricity and at the same time you improve the quality of the night sky. And it’s safer because we actually can see better without that glare.

Leelanau Ticker: What are the fascinating geological features you like to point out to vacationers on the peninsula?
Cookman: Oh, Leelanau is a geological wonderland. It has almost every geological phenomenon with the exception of volcanoes — and we do have buried volcanoes here.

Leelanau Ticker: When did you realize you were a geology guy?
Cookman: My dad was a freelance civil engineer and moved from job to job all over North and South America. In college I was in a geography class with a great teacher who integrated a lot of geology in his class. This class was telling me stories of features I had seen as I grew up. We lived in São Paulo, Brazil. It’s up high, then there’s steep bluffs with switchbacks leading down the ocean. On weekends, we’d go up and down that switchback. I learned that bluff was the eroded remnant of where South America and Africa split apart. I thought that this was fantastic. When that class finished I immediately signed up for geology.

Leelanau Ticker: So are you a rockhound?
Cookman: Mostly what I find is Leaverite. You leave it right there. It’s not because I don’t want it or don’t like it. I like it in place. I like it where it’s supposed to be.

Leelanau Ticker: Curious, where do you point the telescopes when people check them out in the store?
Cookman: This one looks at a place on Stoney Point. The people who live there, whenever they come in, they make a beeline for the telescope. They joke, ‘We should be getting a kickback,’ and I say, ‘you are, we are your security.’

Leelanau Ticker: You mentioned it was a banner year, despite COVID, specifically in telescopes and binoculars. Does that go hand in hand with people having more time at home?
Cookman: I think a lot of people have, if not an express, an underlying passion for science that they never really followed because they had other responsibilities, and now they are seeing this as an opportunity. People wanted the binoculars for birdwatching. They wanted to look at the night sky. I don’t know if a business like this could have made a go [just anywhere]. It works because of what is around us, and people wanting to expand their view.