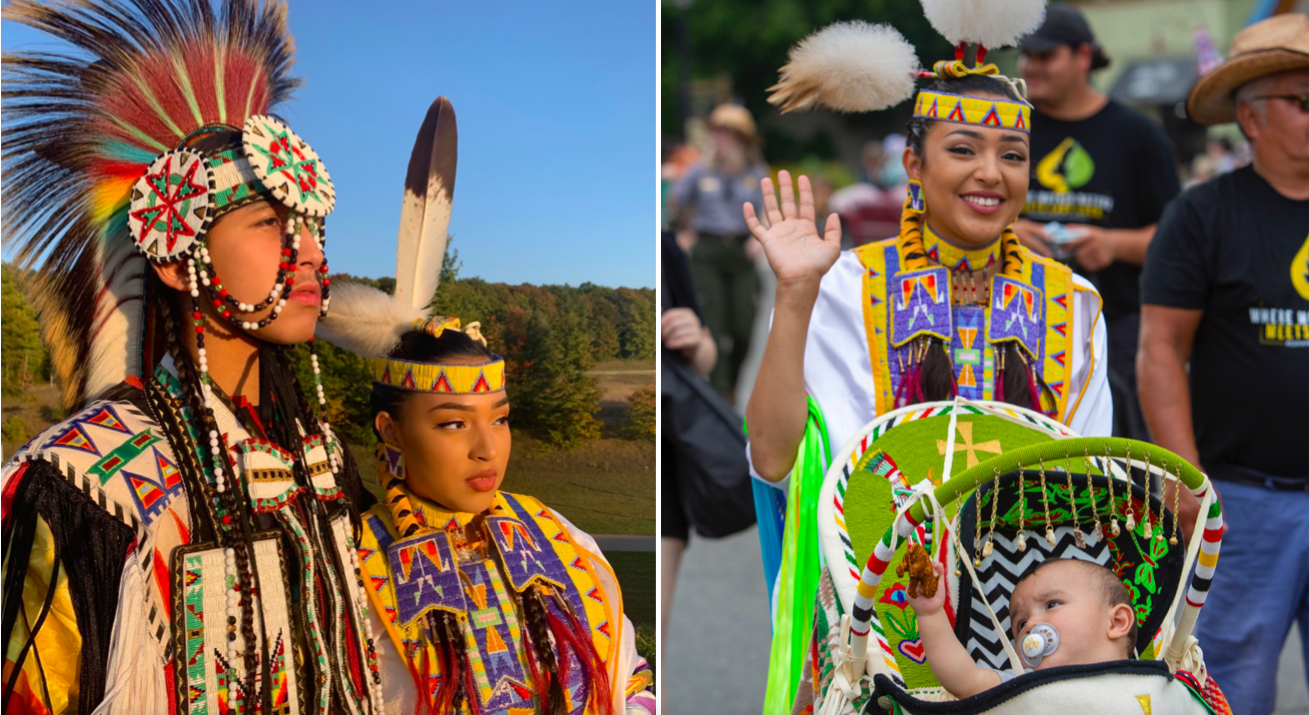 Personalities of the Peninsula: The Many Talents of Beedoskah Stonefish

Peshawbestown's Beedoskah Stonefish, a member of the Grand Traverse Band of Ottawa and Chippewa Indians, grew up steeped in the traditional Anishinaabe ways. Stonefish has been fancy shawl dancing since she could walk, and later traveled with her parents and siblings to compete in pow pows across the country. She was named head young female dancer at the famed Gathering of Nations Pow Wow in Albuquerque at age 12, and while a biology student at Michigan State, represented her home tribe in its Miss Indian World cultural pageant.

She could be considered an ambassador for her generation and her tribe’s efforts toward cultural revitalization, but Stonefish says for her, “I dance for my own personal, mental and physical health — it is a lifestyle. And it definitely makes me feel more connected to my culture, to my ancestors, and Indian people in general. It just feels like home.”

So much so, she and her boyfriend Desmond Madera — of the Blackfeet and Colville tribes in the Pacific Northwest — met at a pow wow (just like her own parents, Walker Stonefish and Joyce Petoskey, did a few decades back).

While dancing with the Delaware Nation in Manhattan, the young couple’s talents — and love story — were featured by ABC. Now new parents, they’ve just returned from a summer circuit of pow wows in Minnesota, Kansas, and Michigan, to introduce their son, Nojimo Makwa, to the culture. Stonefish shares their family recently held a tribal naming ceremony for him: “His name means healing bear.”

Now Stonefish, who graduated with a Bachelor of Science degree from MSU in December, has set her sights on medical school, but is taking time first to serve her tribal community. Read on for more about her plans, her passions, and her deep pride in Peshawbestown.

Leelanau Ticker: So, it sounds like it’s family tradition to fall in love at a pow wow?
Stonefish: Yes, though Desmond remembers the exact moment we met, but I do not [laughs]. At pow wows, Desmond both dances and sings; I am a fancy shawl dancer because my dad is a fancy dancer. The story behind the female fancy dancer is really rooted in feminism. Men’s fancy dance is a war dance — very masculine — the warriors did it and military veterans. [Stonefish’s father served in the Marine Corps.] A long time ago the women said, we can dance, we can be athletic, and we don’t have to sit on the side. Before, the women would carry their shawls on their arms. Now they put them on and dance with them.

Leelanau Ticker: Were your ancestors also dancers?
Stonefish: My father came across images of his grandmother and her sister photographed in jingle dresses, which is pretty amazing. Every tribe across the United States and Canada has pow wows in common — and the one thing the Anishinaabe contributed is the jingle dress. The story is told a little differently across the Great Lakes region, but in every single community it was received as a healing dress. The jingles are cones rolled out of tobacco snuff lids, though our grandmothers made them with anything that could make noise, like deer toes. In our tobacco teachings, when our creator came and named everything, he also gave us tobacco…and it’s how we offer our prayers. So, the jingle dress represents tobacco and prayers and healing. When there are 100 jingle dress dancers, you can feel it.

Leelanau Ticker: Were all your siblings as passionate as you are about learning Anishinaabe traditions?
Stonefish: My oldest brother is 12 years older than me. When he grew up it was definitely in a time that my community was doing a lot of youth work, and by the time my younger sister and I got to middle- and high school age Suttons Bay Schools started teaching Anishinaabemowin. It was awesome — that was my foreign language credit from 7th to 12th grade.

Luckily, I grew up in a community that cares about revitalization, where I had access to whatever I needed as far as traditional medicines or ceremonies. I can’t say the same for my parents' generation, which was also the boarding school and residential school era. My parents didn’t go, but I think a lot of kids who had parents who did go, just because of the trauma they experienced there, they really don’t want their kids to do anything “Indian.” My Dad’s mom was influential in my traditional knowledge. Even through boarding school — which they called the Mush Hole — she still has the language.

The part of culture that is most important to me and the most privileged thing I can have and pass on to my son are our traditional ways and our teachings on life, that ground us to every living thing and every person. This is entwined in our language. So, I want to keep learning and I want my son to learn too.

Leelanau Ticker: You’ve just had a few big life moments; are you catching your breath, or thinking about what’s next?
Stonefish: I am definitely in a new mom vibe, but also serving for AmeriCorp through OPEN-MSU and InterTribal Council of Michigan, based on early childhood education and opioid prevention for pregnant or breastfeeding moms. It gives me an opportunity I never had before to be out doing work in the community and solving problems. I’m in my first few weeks and still figuring out what kind of impact I want to make. I feel like with my background, we can use culture as prevention — the art, dancing, sewing, beadwork, singing, traditional foods.

Leelanau Ticker: Because you grew up with all of that...
Stonefish: Yes. And I am still growing up [laughs]. This is a result of my community and people who write grants to get all these resources to be able to have programs for youth. My older brothers’ and sister’s generation learned and then would teach us. That was my older sister who just drove by — she is going to our community garden, and when she’s done working in the garden, she distributes the food to the community.

Leelanau Ticker: What makes you proud to be from Peshawbestown?
Stonefish: There are a lot of people who are doing some really big things. My cousin Alexarae Day, who is thriving as an artist, was just featured in Vogue, modeling for designer Lauren Good Day, who does both traditional clothing with full beadwork and native fashion designs.

And [tribal member] Samantha TwoCrow shared that she is doing beadwork for a Netflix series coming up. She is someone from my brothers’ generation who helped teach me how to bead.

I think the new age is embracing more diversity and wanting to hear more diverse stories. But people have always been doing really interesting things here from my perspective. All the way back.