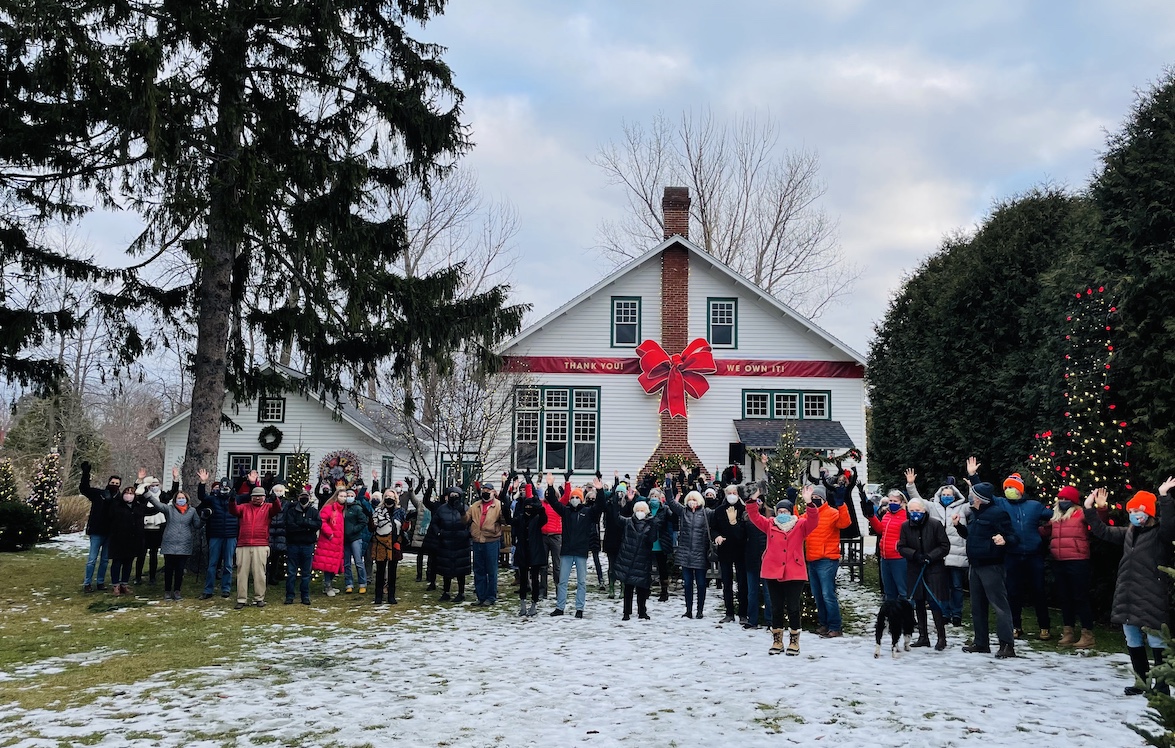 Ownership of the iconic Old Art Building (OAB) in Leland has returned to the community.

At a joy-filled dedication on the front lawn Wednesday, Dan Lisuk, board president of the Leelanau Community Cultural Center (LCCC) — which oversees the OAB as a gathering place and hub of cultural events — reported that “this 99-year-old gem of a building was returned to the Leelanau community after being owned by Michigan State University (MSU) for 81 years, 2 months and 6 days.”

“For years we tried to buy the building from MSU,” he explained. “Finally, in April of last year MSU said they were ready to discuss the sale. They accepted our purchase offer for $800K and in February of 2020 the MSU Board of Trustees passed a resolution approving the sale of the building to the Leelanau Community Cultural Center.”

Local families and individuals with ties to the OAB contributed to the building’s purchase and endowment to ensure its future.

Becky Ross, executive director of the LCCC, says, “In a fundraising campaign of ten months the community dug deep and donated money to the Leelanau Community Cultural Center to buy it. We had over 440 families participate in the campaign which to date has raised $1.3M.”

The title for the OAB was transferred to the LCCC on Dec. 30.

Lisuk said at the OAB’s dedication, “This simple, but beautiful building is only important because of how it can serve the community. This is our opportunity…”

He adds that part of the mission of the LCCC is to “ensure the preservation of the Old Art Building as a significant part of Leelanau history.”

As Lisuk explains, “This is important Anishinaabe ancestral land, at the confluence of the river and the lake; so now the onus is on us to be thoughtful caretakers of this historic property.”

And the building’s history itself runs deep: The Old Art Building is one of the oldest community centers in the state, and the dream of Leland resident Allie Kaiser Best. Best raised funds to build it in 1922 to be a Women’s Club and Chautauqua-style venue for traveling performers, to honor her late husband Walter T. Best, who was a skilled conjurer better known as “Maro the Magician.”

The Women’s Club then donated the building to Michigan State University in 1939, launching a 50-year pilgrimage of MSU art students and professors to its Leland summer campus. In 1989, MSU called it quits on the art school program and the building sat vacant until 1992, when a group of concerned citizens convened and sent a delegation to Lansing. They secured a lease of the building from MSU for Leland Township, and the LCCC was formed to a preserve the building and manage its programming.

Ross says the long-sought chance to purchase the beloved structure has come to fruition because of cooperation with MSU, “I so appreciate MSU working with us on this deal, and feel it was a win-win-win: MSU won, LCCC won, and the biggest winner is the Leelanau community.”

She adds, “The community response showed us just how much love there is for the Old Art Building itself and what happens here.”

What’s next for this cultural hub of the county?