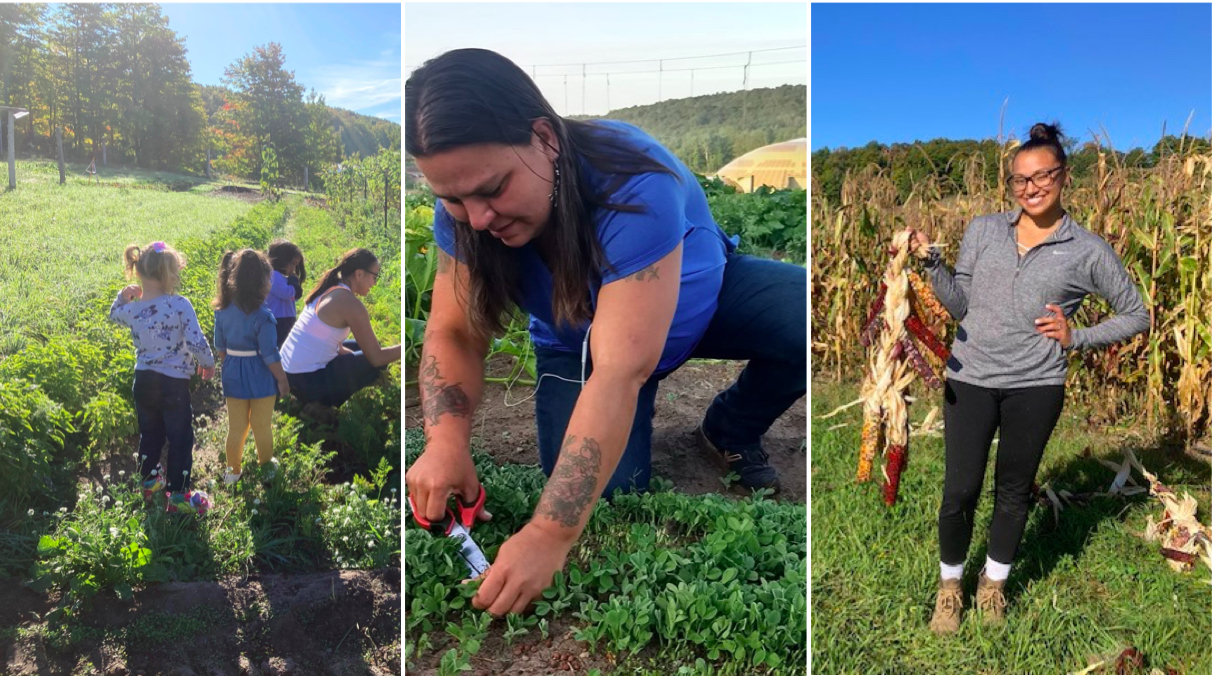 This winter, thanks to seeds planted back in 2020, members of the Grand Traverse Band of Ottawa & Chippewa Indians (GTB) are making comforting mandaaminaaboo, a traditional corn soup, with dried mandaamin that was grown on verdant acreage in Peshawbestown.

Beyond providing spiritual and physical nourishment to Tribal members, the program is also targeting agriculture as a source of economic development and sustainability within GTB.

Will Derouin, agriculture coordinator with GTB who is leading the new Agricultural & Food Sovereignty department, shares that a three-acre garden in Peshawbestown is both feeding the community and supplying the GTB’s own food outlets with local, organically grown food items.

“There is weekly produce available to GTB members, including the youth and elder programs, and food pantries; the other half of the produce we grow we offer for sale to the chefs at the Turtle Creek restaurants,” he says.

Derouin started with GTB in 2019 and after a hiatus due to the pandemic rebooted his role May of 2021. His previous experience as farm operations manager at 9 Bean Rows farm in Lake Leelanau (and before that at his alma mater Western Michigan University’s Office for Sustainability) means he is versed in developing sustainable farming and produce distribution programs.

He notes the mandaamin seed was added to a growing seed library, which also includes prized gete-okosomin — which loosely translates to “big old squash.”

It’s “a beauty of a squash that grows up to three feet long, with bright orange-yellow stripes and similar flesh to butternut or buttercup,” shares Derouin. “It has been cultivated by Indigenous people in the Great Lakes going back 5,000 years.” Marissa Fessenden with Smithsonian Magazine reports that this millennia-old squash dodged extinction and is seeing a resurgence thanks to Native Americans who carefully tended the plant lineage, and its seed traveling from hand to hand.

Gete-okosomin and mandaamin are part of agricultural lifeways of the Anishinaabeg, and, notes Derouin, “as we establish some of these resources, traditional lifeways can be rekindled.” He sees community involvement as a big part of that equation. He is grateful for the knowledge and assistance of Cheyenne Hopps, a GTB Tribal member and Native American health coach who works alongside Derouin during the growing season, and for the tribal members who planted the corn and were a part of its harvest.

While the GTB has nearly 1,000 acres of agricultural land across its six-county service area — that looks like everything from a former dairy farm south of Charlevoix to a hoop house in Antrim County — much of the active food production is in Peshawbestown. “In Peshawbestown there are over 100 acres of active or former ag land,” says Derouin. “The Tribe has bought lands around the casino —including quite a few cherry and apple orchards — and our main site is referred to as the Peshawbestown Farm.” Last summer the natural resources department grew “all of the popular vegetables — beets, melons, carrots, radishes, tomatoes — and traditional corn, squash, and pumpkins. All are annual crops with the maximum return financially or socially.”

Case in point: launching a new maple syrup enterprise just in time for the sap to start flowing in March. “We have purchased a commercial maple syrup evaporator, housed near our sugar bush off Putnam Road,” shares Derouin. “As we scale up production, we will be able to offer syrup to the community and also sell it.”

The natural resources department will tap the maple trees and evaporate the sap with a commercial system, but Derouin is hopeful a local member of the Tribe who has his own sugar bush will also be able to host a workshop or be involved on site to share traditional syrup-making methods.

Derouin explains this is a major step not only as a means for landfill diversion of fishery waste, but also as a revenue opportunity: “The tentative plan is that we process 2,000 pounds fish waste every week May through October.” A portion of the fish waste will be transformed into liquid fish emulsion, a fertilizer which many farmers favor because it can be run though their irrigation systems. “The plan is by 2023, we should be organic certified and sell the fish emulsion as an organic product,” he explains.

The Agricultural & Food Sovereignty program is poised for meaningful growth, Derouin says, adding that with maple-tapping and planting seasons right around the corner, “we are going to get the word out for the next couple of months that we would love for community members to get involved.”