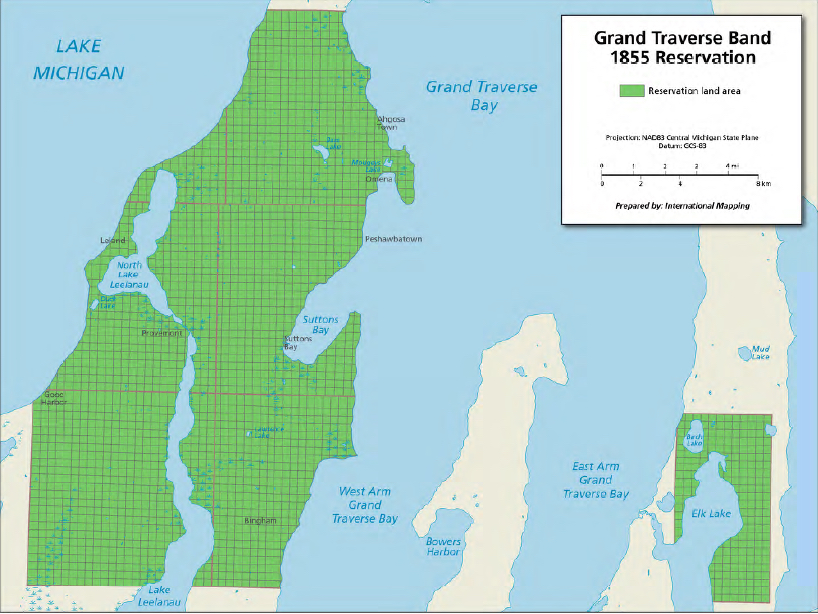 The Grand Traverse Band of Ottawa and Chippewa Indians (GTB) got a boost on Tuesday evening from the Leelanau County Board of Commissioners in its long-running campaign to seek reimbursement from the federal government for tribal land that was allegedly stolen over 200 years ago.

GTB is seeking something called a “Congressional Reference Resolution” (CRR), which would effectively give the tribe the ability to sue the United States in the U.S. Court of Federal Claims for an alleged Fifth Amendment violation. The tribe was seeking a letter in support of its resolution from the Leelanau Board of Commissioners, which Congressman Jack Bergman asked GTB to obtain before he would support the CRR.

The alleged Fifth Amendment violation dates back to an 1855 treaty, which ceded vast amounts of tribal-owned land to the United States Government with the understanding that the government would set aside some of the property as a permanant “reservation” homeland for tribal members and their children.

Despite the supposed protections, the GTB claims the government over time sold approximately 87,000 acres of reservation land to non-Native American settlers and lumber firms, reneging on the 1855 treaty without providing any monetary compensation to the tribe. Over a 40-year period, the tribe lost virtually all of the land.

The Fifth Amendment to the United States Constitution states that “no person shall…be deprived of life, liberty, or property, without due process of law; nor shall private property be taken for public use, without just compensation.” GTB wishes to sue the United States for a violation of this amendment in order to seek just compensation for what it considers the illegal taking of its treaty lands. (Read more about the claims for the loss of the GTB’s treaty lands and the need for a congressional reference bill in the packet for the December meeting of the Leelanau County Board of Commissioners executive board.)

The tribe is not seeking to challenge or invalidate property ownership for any of the current title holders whose land falls within the 87,000 acres in question.

On Tuesday, the Leelanau Board of Commissioners voted 4-3 to approve a letter in support of GTB’s Fifth Amendment resolution. Effectively, the Board of Commissioners has no say in whether the GTB’s case is heard before by the federal government. That process formally starts in Congress itself, where a senator or house representative can introduce a statute to authorize a person or party (in this case, the GTB) to file a claim in the U.S. Court of Federal Claims. Said another way, in order to obtain the CRR that would allow it to sue the United States, GTB needs to get its claim approved in either the Senate or the House. Bergman, a U.S. Representative for Michigan’s 1st congressional district, has indicated that he may be willing to bring the GTB’s claim before the House if there was evidence that the claim had local support.

“Congressman Bergman, in the past, said he would be more comfortable if we explained the nature of our claim to the local community, which we have done through the written memorandums that we’ve submitted over the years and the FAQs that we’ve provided [page 29],” explained John Petoskey, GTB’s general counsel, at the Leelanau Commission meeting on Tuesday evening. “This is not a process that requires [the board’s] consent, but in order to get any political process done in Congress, you have to have consent of the local community, to a degree, for a congressional representative to enter a bill and for it to get through the committee process to pass with bipartisan support. So that is what we’re doing: it’s not a procedural requirement that [our claim] comes before the county commission; it’s a request by our local congressman that we present the nature of our claim to local units of government so that they understand what the tribe is seeking.”

The GTB has been pursuing the opportunity to file suit against the United States for years. In 2015, Dan Benishek – Bergman’s predecessor in the House – introduced House Resolution 381, which would have given the GTB the right to pursue a suit against the United States. The resolution did not receive a vote on the floor and ultimately died in Congress. Benishek had pushed a similar resolution – also unsuccessful – several years earlier. In 2016, GTB asked the Leelanau Board of Commissioners for support on House Resolution 381, but at the time, the commission opted to stay neutral on the matter.

Support for the resolution was not unanimous at this week’s County Commission meeting, either. Board Chair William Bunek raised issues about supporting an effort to sue the United States – something he believed would “be adding more debt to our grandchildren.” Commissioner Debra Rushton, meanwhile, questioned whether the board had the knowledge or the authority to make a judgment on the legitimacy of the GTB’s claim. The two, along with Board Vice-Chair Melinda Lautner, were the dissenting votes in the 4-3 commission split to support GTB’s resolution.

In supporting the resolution, Commissioner Tony Ansorge noted that the board’s support of the GTB’s claim did not necessarily need to indicate a complete understanding or endorsement of the matter.

“Our support of this resolution is not saying that we agree with every claim the tribe has made,” Ansorge said. “We’re not trying to litigate this. All we’re saying here is that we support the tribe in taking their claim, in the only process they have open to them, to get their day in court.”

Petoskey tells the Leelanau Ticker that GTB is “gratified” by the support of the Leelanau County Commission and will now look to take the matter before Congress.

“The next step is to have a member the House or Senate sponsor a bill implementing the Congressional Reference Resolution, which only needs to pass a single chamber of Congress,” Petoskey explains. “GTB anticipates working with a new Congress in 2021 to achieve the CRR’s passage. If the CRR passed, then GTB anticipates a United States Federal Court of Claims case on the merits that will in all probability take a couple of years to reach its trial court decision and all appellate remedies.”

Petoskey adds that, should the U.S. Federal Court of Claims side with GTB on the case, that decision would still need to be reviewed by Congress before any Fifth Amendment remedy could be officially implemented.

Pictured: The map at top — provided by the Grand Traverse Band of Ottawa & Chippewa Indians — shows the tribe’s reservation land area in 1855.