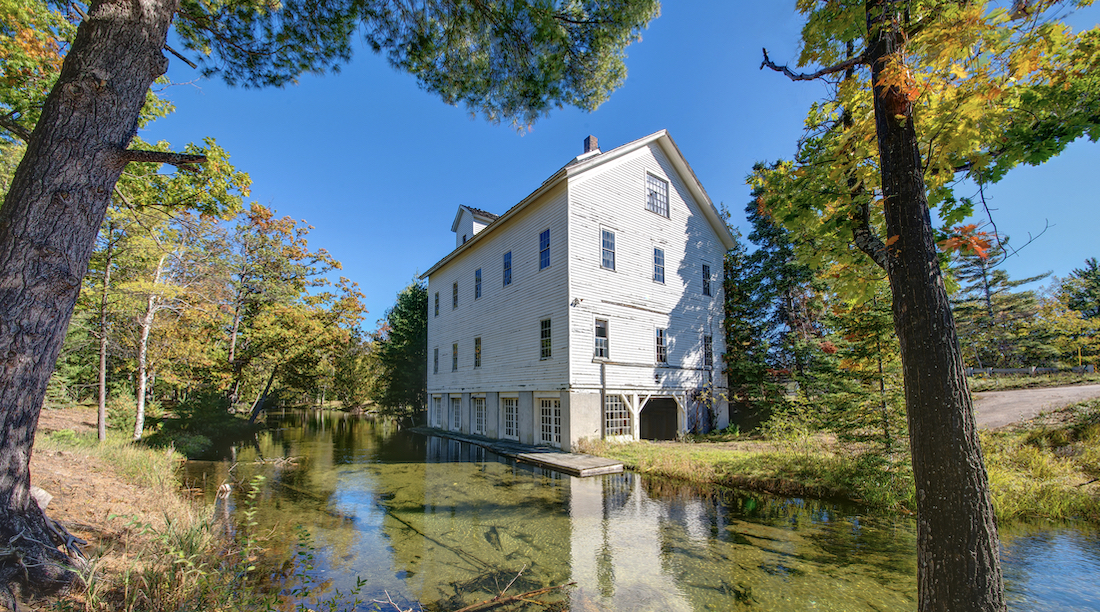 After nearly two years spent stabilizing the 1879-era grist mill and rehabbing the miller’s house on a high-profile historic property just north of Glen Arbor, owner and steward Turner Booth is ready to share what’s next. His plans include a museum, future inn accommodations on the property next door, and much more.

Booth presented his site plans for the property located on the Crystal River at 5402-5440 West Harbor Highway on behalf of The Mill Glen Arbor, LLC, before Glen Arbor planning commissioners on Thursday.

Should the site plans be approved, the 7,195-square-foot historic grist mill could be open as a museum and community gathering space with a small gift shop and cafe as soon as next summer.

Says Booth, “I’ve spent the last two years carefully considering the best way to revive this property. I’ve incorporated Tim Cypher’s [of the Glen Arbor Planning/Zoning Office] feedback, the feedback of family and friends, and countless local residents and visitors. My plans are primarily focused on preservation and making the property available to the public.”

Tours for up to 20 people at a time would highlight the history of the property and surrounding area. Booth plans to work with local historians to curate the museum experience.

“In my research I have gathered stories of Matilda Brammer, the miller’s wife circa 1920, greeting farmers at the property and offering them coffee and donuts as they waited for their corn and wheat to be processed, and of Herman Brammer greeting locals purchasing lake ice, fruits, and vegetables from the icehouse and farm stand on the property.”

In the 1970s, the mill was owned by Fred Ball, of the Ball Canning Jars family.

“He operated the mill as a recording studio, and it sounds like the mill was a place to be during those times. I am collecting the albums and other paraphernalia and I plan to honor some of that history in my update to the property,” says Booth.

The grist mill would also serve as a space for local groups to conduct meetings and gatherings or offer classes.

In addition, according to the site plan documents submitted to the village, the 2,292 square-foot miller’s house — where Booth currently resides — would be used as a “rooming house” to be managed by Booth or a third-party service.

The plans also include gardens, boardwalks, patios, a boathouse for the storage of kayaks, parking, and a new driveway to improve ingress and egress. The site plan states that initial feedback from the Michigan Department of Transportation (MDOT) has been positive, noting that the proposed point of ingress/egress is much safer than the existing point.

On Thursday, Booth also requested rezoning of 5454 West Harbor Highway, the parcel immediately south of the mill property, which he acquired after the initial mill purchase. That property contains seven additional historic structures in various stages of disrepair, including a home, garage, an icehouse, a small stable, a smokehouse, a woodshed, and an outhouse.

“The most interesting is the icehouse. The ice was cut from the Fisher and Glen Lakes in the winter and stored in the icehouse for sale during the summer,” says Booth.

The application seeks to amend the zoning of the 5454 property from single-family residential to recreational to match that of the main mill property. “A rezoning to recreational would allow a variety of uses that are complementary to the plans for the mill,” he says.

“I’ll call it a dynamic property. As I have worked closely with Tim [Cypher], I have seen that with this large property, it doesn’t lend itself to being one thing. It can’t just be an inn, and it’s not just a museum or a business. Different uses go with different structures.”

Glen Arbor planning commissioner Mike Plessner, who has recently toured the property, said, “It’s incredibly impressive what Turner is doing down there.”

A public hearing will be held at the regular planning commission meeting on November 5 to consider the two applications that Booth is proposing, though Cypher says only the site plan can be approved at the next meeting.

Cypher estimates that the rezoning could take roughly five months to be approved. For that reason, Booth has requested that his site plan is reviewed and processed separately from the rezoning, so that work on the grist mill property can proceed as scheduled.

If the 5454 property rezoning is approved, Booth expects to submit a site plan review application for that property sometime next year.

In his rehabilitaiton of the mill thus far, Booth says, "I think my favorite discovery would be the millers’ writing on various surfaces throughout the mill. There are old grain elevators and chutes that have calculations, names, and dates penciled all over them. I picture the miller jotting down a few notes as a local farmer drops of his harvest...”

“I hope everyone will be able to experience the property the way I do,” he adds. “It’s both peaceful and energetic…it’s incredible to think of the construction of this place almost 150 years ago and the activity that was going on here. The mill was a center of commerce and community.”

It’s a new dawn for the overgrown property at the former Manitou Gardens on M-22 in Elmwood Township. And in the heart of Maple City, a young ...

The Glen Arbor Arts Center (GAAC) is offering free, one-year individual memberships to all healthcare workers as a way to express appreciation and support for frontline heroes. ...

Get Bernie’s Look: The Original Sweater Mittens Are Made In Leelanau County

The nation has collectively delighted in Senator Bernie Sanders’ warm and functional inauguration day ensemble, as the many memes that continue to flood social media attest.  Sanders’ ...

Is there actually homelessness in mostly rural Leelanau County? Though the county’s numbers don’t match those in neighboring Grand Traverse, the problems are still evident, yet they’re ...

It’s a new dawn for the overgrown property at the former Manitou Gardens on M-22 in Elmwood ...

Get Bernie’s Look: The Original Sweater Mittens Are Made In Leelanau County

The nation has collectively delighted in Senator Bernie Sanders’ warm and functional inauguration day ensemble, as the ...

Is there actually homelessness in mostly rural Leelanau County? Though the county’s numbers don’t match those in ...