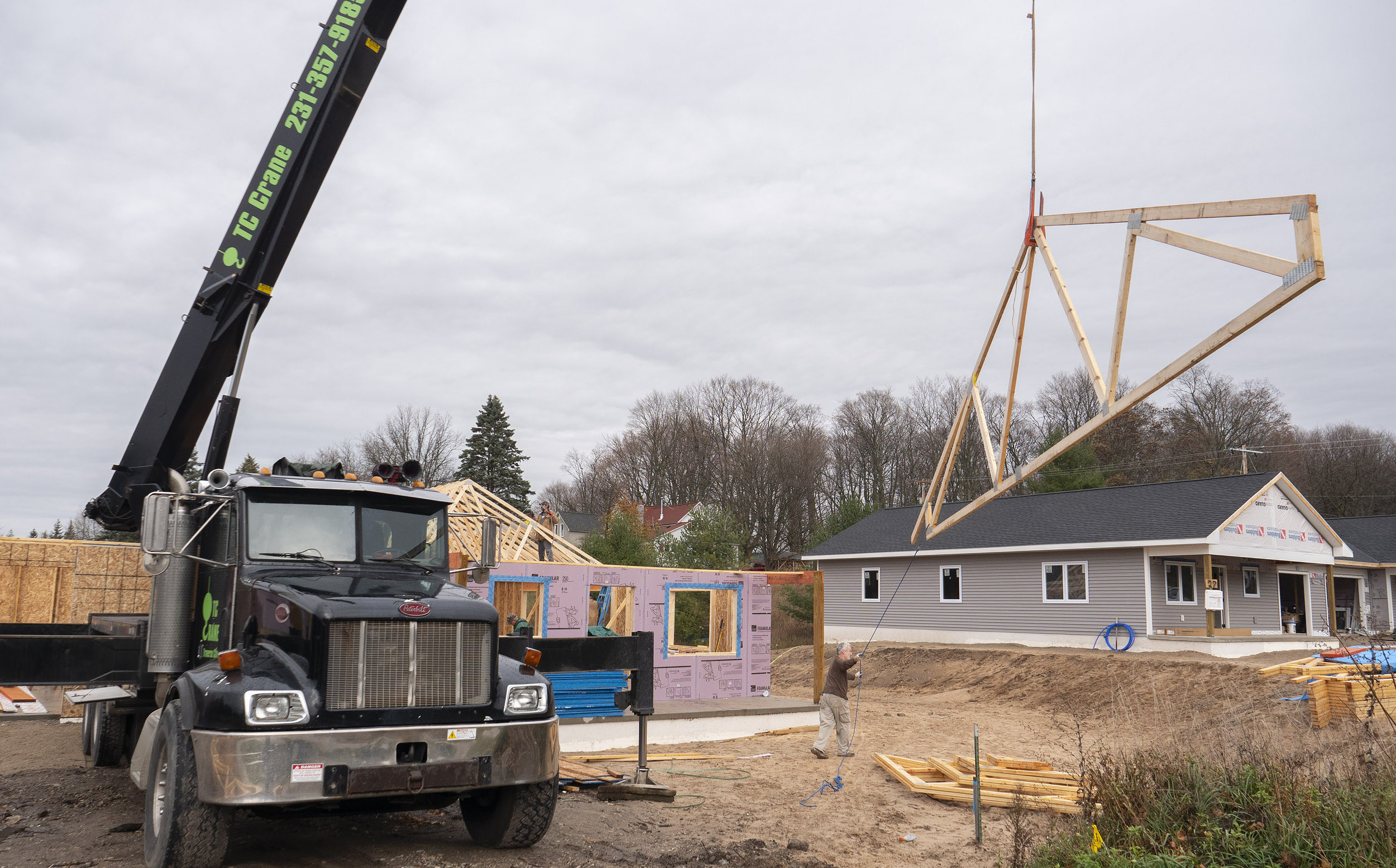 The first of the duplexes is under construction, and the second has its foundation with trusses scheduled to be set this month. Wendy Irvin, chief executive officer for Habitat Grand Traverse explains, “We want to get it enclosed before the harsh winter weather is here. The goal is to have it enclosed so we can work through the winter.”

The first two duplexes have four homeowners lined up. Habitat Grand Traverse selects applicants based on need and willingness to partner, which includes taking classes in financial management, home maintenance, and “sweat equity hours” to help with building. Applicants must have household incomes between 30-80 percent of the Area Median Income (AMI), which in Leelanau County is $23,670-$63,910 for a family of four.

The third piece of the puzzle is ability to pay, which Habitat Grand Traverse defines as housing payments of no more than 30 percent of monthly gross income. The organization partners with the USDA and, locally, TBA Credit Union to pair homeowners with financing. Rising mortgage rates, which have more than doubled since Maple City Crossings broke ground over a year ago, create a unique challenge.

“It presents issues for us as an organization because we have our rule of thumb for 30 percent of income. The burden of any increases, whether it’s in building materials or interest rates, falls on our organization to fill the gap,” says Irvin. “That’s why we’re looking for additional financing tools and funding support so we can continue to help families.”

One such financing tool was a proposal to use Tax Increment Financing (TIF) funding to assist Habitat Grand Traverse on the project. In August, Habitat Grand Traverse and the Brownfield Redevelopment Authority of Leelanau County presented a plan to the Kasson Township Board to capture 80 percent of the portion of property taxes paid to Kasson Township for 30 years. The funds would be used to help Habitat offset the projected $700,000 funding gap. At its August 9 meeting, the Kasson Township Board voted 4-1 against the TIF funding.

“It [the TIF proposal] was kind of a rare conversation, and a new conversation. It’s a challenging concept to embrace,” says Irvin. “We are still seeking support from direct donors and foundations.”

As for the final two homes in the third duplex, Habitat is holding off on selecting applicants until funding is secured.

The second project is a partnership with New Waves United Church of Christ. The 20-acre parcel on Bugai Road north of M-72 will include six homes for Habitat Grand Traverse ownership, and seven rental homes which will be owned and managed by New Waves. Each organization is fundraising for its portion of the project, with Habitat Grand traverse seeking to raise $825,000.

Habitat homeowners will be chosen based on the same criteria used for Maple City Crossings, while the New Waves-owned rental units are targeted at a lower income bracket of 30-50 percent of AMI.

“We are partnering with the Northwest Michigan Coalition to End Homelessness on some of the units,” says Tina Allen, New Waves volunteer project manager. “The coalition has several organizations that receive federal funds for people coming out of homelessness. Our renters will be families, because that is the nature of the homes. They can get rental assistance, and case management support to help them get into stability.”

New Waves’ goal is to raise enough funds to offer the homes at HUD’s fair market rent, which is substantially lower than actual market rent. New Waves is also willing to work with renters who have prior evictions. “Very few landlords want to take somebody with an eviction,” says Allen. “We’re trying to fill that gap for people who have had a rough time, and just need to get back on their feet."

Increasing infrastructure and building costs continue to be a challenge. “In fall of 2019 we estimated the excavation and building of the roads at around $180,000,” says Allen. “The lowest bid last year - and I know they gave us a deal - was $275,000.”

New Waves received a $50,000 grant from Rotary Charities to help with infrastructure. Says Allen, “With that grant, we’re close to $450,000 before there’s even a beginning of a home.”