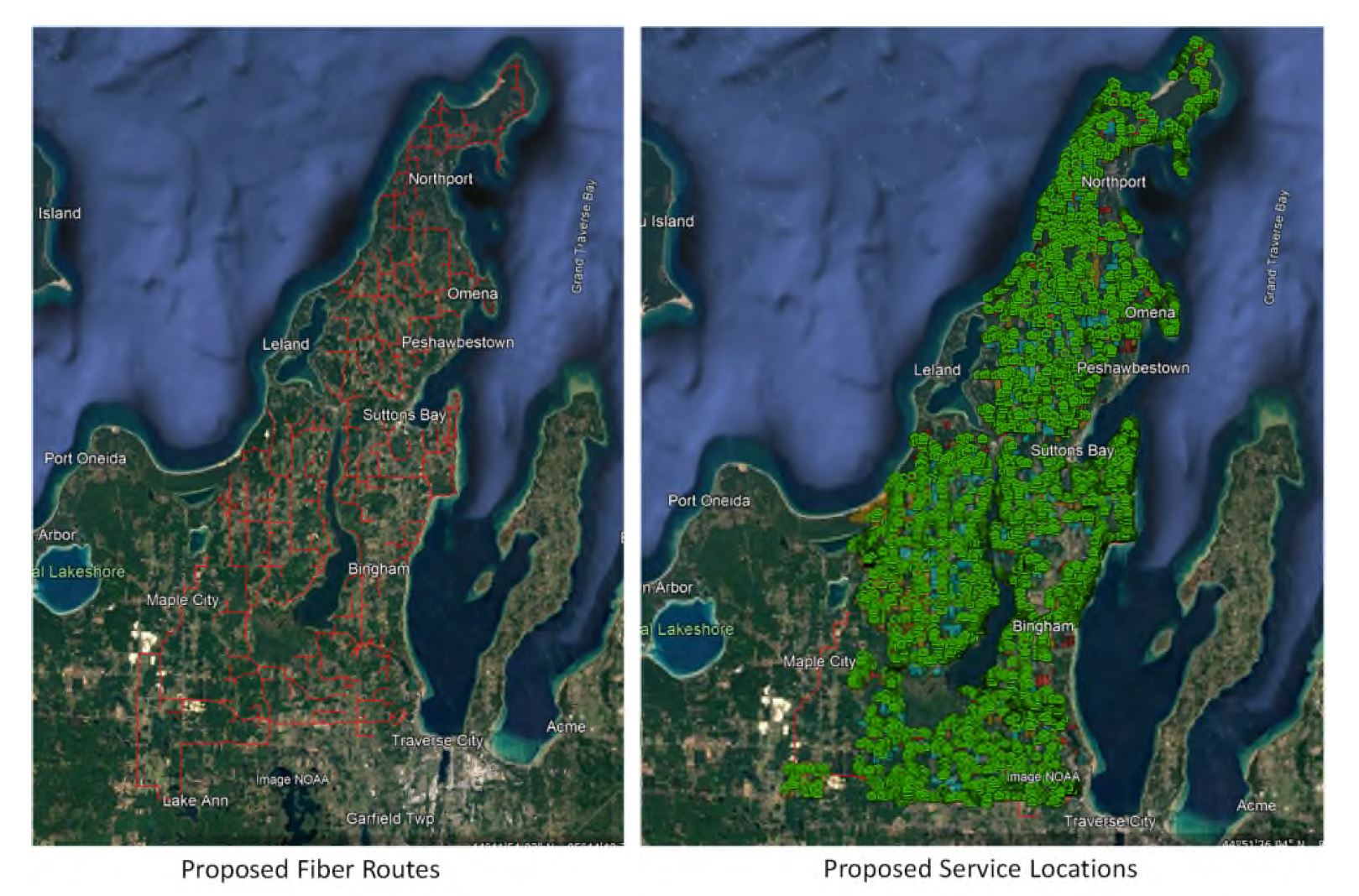 What Does Leelanau County’s ARPA Investment In Fiber Internet Mean For Residents?

The time has come for everyone in Leelanau County to have reliable high-speed internet access.

That philosophy led the Leelanau County Board of Commissioners to allocate the majority of the county’s American Rescue Plan Act (ARPA) dollars toward a project that will bring high-speed fiber internet service to nearly 8,000 unserved or underserved households throughout the community. But what’s the timeline for that project, who will it benefit, and is it the best way to spend money that was earmarked to help all of Leelanau County? The Leelanau Ticker investigates these frequently asked questions around the county’s impending broadband transformation.

First, a quick recap: In February, Leelanau’s Board of Commissioners voted unanimously to put $3.2 million of the county’s $4.2 million ARPA dollars toward expanding broadband coverage.

For that project, the county has tapped Point Broadband, an Alabama-based company that formed in 2017 “to address one of the great challenges facing our country: the lack of fiber connectivity in rural America.” Five years in, Point Broadband manages over 5,500 miles of fiber across eight states, servicing nearly 60,000 rural customers.

The planned fiber network in Leelanau will entail “a total capital cost of $17.4 million,” including $14.3 million to build out the network itself and an additional $3.2 million to connect residents.

Leelanau is only on the hook for $5 million of that cost, as Point Broadband will spend $12.4 million of its own capital to build out the network and connect customers, “plus another $10 million in ongoing operational, customer support, and network expenses over the coming years.” Beyond the county’s $5 million contribution, Point Broadband has said it “will not ask for any additional construction contribution from any resident in the proposed service area,” and that customers can expect a connection charge of $99 or less.

Point Broadband is able to absorb that sizable upfront spend thanks to “a significant investment” it received last year from GTCR LLC, an Illinois-based private equity firm with a history of “mega broadband investments.” According to Chris Scharrer, the consultant overseeing the fiber project on the county’s behalf, Point Broadband also sees a lot of future value in building a network like this in northern Michigan.

“[Point Broadband] has two big benefits to being able to do this,” Scharrer tells the Leelanau Ticker. “One is they’re going to be serving a community of 3,100 homes that have nothing right now [in terms of broadband internet service]. From my experience seeing other rural communities getting built out, Point Broadband can expect a 70-80 percent take rate, meaning 70-80 percent of those homes will sign up for service. The other part of the reason they’re investing $14.3 million is that they're also planning on eventually building some of the higher-density areas in the southern townships – including Bingham, Elmwood, and Suttons Bay. There’s existing Charter service [in those areas], but Point Broadband will be able to start offering competitive services there. The take rate will be lower in those areas, but there’s an established clientele, some of whom are looking for alternatives to Charter right now.”

Commissioners Ty Wessell and Patricia Soutas-Little say the potential of an expanded network in the future is also a reason that spending ARPA money on this project is worthwhile.

In addition to the 3,100 residents on the eastern side of the county that will be getting broadband for the first time – households that, per Point Broadband, represent “95 percent of the unserved residents in the service area” –  4,672 other Leelanau homes and businesses that “currently have some level of service, but no fiber alternative” will also benefit from the initial buildout.

Future expansions from Point Broadband should grow that number to include much of the county, including western parts of Leelanau not included in the initial map (pictured). So, while critics of Leelanau’s ARPA spending have noted that the project serves only parts of the county – mostly Leelanau, Kasson, and Solon townships – commissioners are confident it will have a broader impact in the long run.

“There was unanimous agreement amongst all the commissioners that this had to be the top priority [for our ARPA money],” Wessell says. “And there’s also 100 percent confidence that we will get more [ARPA] money. We’ve tried to tell the people whose requests we weren’t immediately able to fund – for mental health, for housing, for ALICE – that those conversations and the county's role in meeting those needs are going to continue.”

“I think people have come to recognize that broadband is not a luxury; it’s a utility,” Soutas-Little adds. “We cannot have another 2020 – where businesses couldn't communicate, school kids couldn't do their homework, and our residents couldn't access telehealth medicine. This pandemic was very, very challenging for Leelanau County. We realized how desperately we need effective broadband so that we are never in that position again.”

Soutas-Little says the Leelanau commissioners are hard at work securing the additional $1.8 million it will need to pay Point Broadband – a process that involves “reaching out to legislators,” exploring governmental funding programs, and seeking out grants or other alternative funding sources.

Point Broadband, meanwhile, is finalizing its network design and applying for permits, with plans to start buildout this summer. The company is working with Cherryland Electric and will utilize many of Cherryland’s powerline poles throughout the county to hang the fiber – something Scharrer says “drives their construction costs way down, as compared to burying [the line] everywhere.” Point Broadband estimates it will be able to get 30-40 percent of the network built by winter, with intent to finish the rest “before year-end 2023.”

Concurrently with the Point Broadband project, a company from Pigeon, Michigan called Agri-Valley Services is bringing a “fixed wireless broadband internet service” based on 5G technology to Leelanau County. The Agri-Valley option will use three county tower locations – Maple City, Central Tower, and Omena Tower – to deliver wireless internet connectivity to the surrounding areas. “It’s going to create some service areas off those three tower sites that can reach farther than any typical cell tower can do right now,” Scharrer explains of the network.

Wessell also notes that the commission has approved plans “to add an additional tower at the Government Center” and hopes to add yet another new tower in Leelanau Township in the near future. Those additions, he says, will “enhance 911 service [and] provide expanded cell and wireless service to residents in unserved areas.”

Ultimately, the goal is to make sure every home and business in Leelanau County has access to high-speed internet service – and ideally to a competitive range of options from which they can choose. “We will continue working with other ISPs to ensure service is available to those areas that will not receive fiber-to-the-home from the Point Broadband project,” Wessell promises.