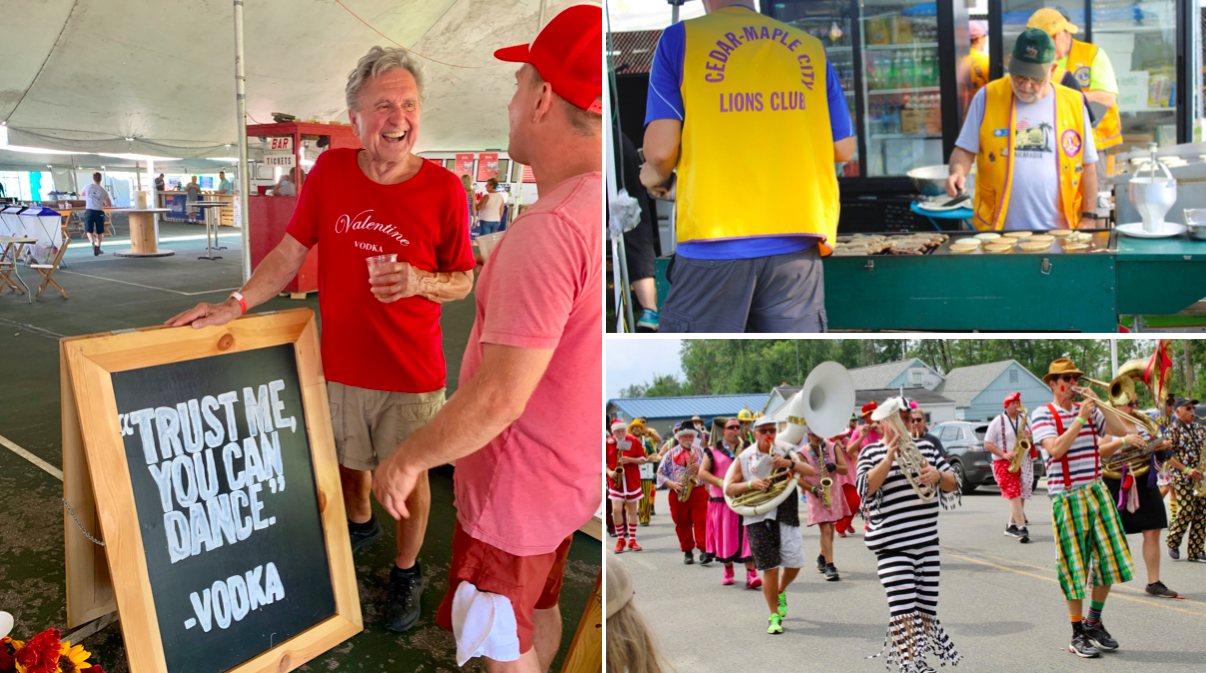 Cedar’s annual polka party went out with a bang, numbers-wise, and with minimum impacts from the thunderstorms that loomed large over the peninsula, festival co-chair Lisa Rossi-Brett tells the Leelanau Ticker.

“Cedar Area Fire & Rescue did a really good at monitoring the storm for us,” she says. “Friday night we shut down the band at 11:30pm due to water on the dance floor. And the Sunday storm at 1:30pm did cut the craft fair short. But the crafters were happy with their numbers between 10am and 1pm; next year with the whole day it will be even better.”

This was the inaugural year for the Polka Fest’s Craft Fair & Farmers Market, the Corn Hole Tournament, and the “Run 4 The Kielbasa — You Never Sausage A Race!”

Race director Mike Miller says the festival far surpassed their 100-registrant goal for the first year: “We wound up with 216 folks registered, from 6 to 83 years young. Three dogs also made the four-mile trek!”

The post-race highlight was the free pancake breakfast prepared by the Cedar-Maple City Lion’s Club. Miller notes, “next year we are considering adding a ‘Pierogi Fun Run’ for those that want to participate but maybe not commit to four miles.”

Kathleen Koch, parade chair and owner of the Polish Art Center in the village says her grassroots campaign to bring back “polka at the pumps” during the festival at Bunting’s Cedar Market was a success — as anyone getting gas in Cedar over the weekend experienced. At her shop’s booth at the festival, Koch debuted a “Cedar, The Town Where Polkas Play Every Day” shirt, which was “overwhelmingly successful.” Next up? Hoodies. “This is the start of the great Cedar branding movement,” she laughs.

Overall, says Rossi, “this year’s numbers were amazing — gate admission and bar proceeds were up about 30 percent from 2019.” Recipients of the 2021 Polka Fest profits — which fund year-round charity work and community projects in Cedar — will be decided in October. In previous years those proceeds supported college scholarships, firefighters, families in need, and projects maintaining and beautifying the downtown.

Festival organizers — who shifted the 39th Cedar Polka Fest date a total of three times due to the pandemic — have already made one key decision for next year: Cedar Polka Fest will now permanently stay in August.

“The very first polka fest, which was held in the street in downtown Cedar, was actually held in August,” says Rossi-Brett. “COVID pushed us around until we ended up right back at home, with the numbers proving we are right where we should have been all along. Our vendors and even the sheriff’s department preferred these dates, everyone involved did.”