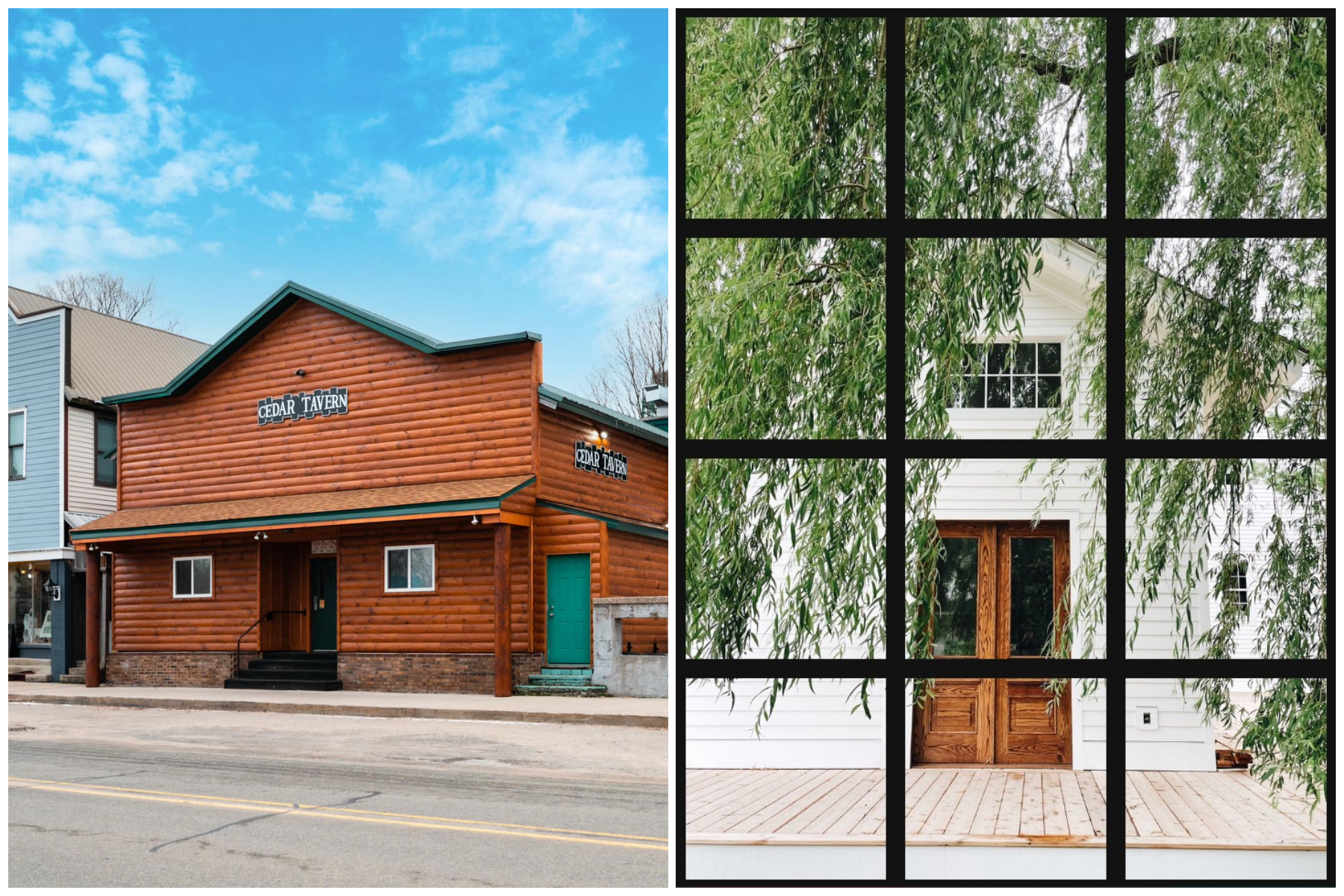 A Leelanau County institution is hitting the market, Glen Arbor’s historic grist mill is set to reopen this spring as a new restaurant, and Traverse City Restaurant Week is creeping northward into Leelanau County. The Leelanau Ticker has the scoop.

Cedar Tavern
Want to own one of Cedar’s most iconic establishments? The Cedar Tavern hit the market last week for a listing price of $1.2 million.

As the real estate listing notes, the bar/restaurant has been under the same management for 45 years. The sale includes the building, the property, and the business itself, including all equipment and fixtures, the restaurant’s Class C Resort liquor license, a recently-added outdoor patio area with seating space for 20 people, and an “adjacent parcel which is currently being used for parking.” Also included is an “expansive upstairs,” which the listing notes is “currently used for storage, [but] was in previous years rented out for additional income.”

After the real estate listing officially went live last Wednesday, owner Ellen Stachnik confirmed the news on Facebook, writing: “Well it’s out there. After a lot of talking we have decided to list the Tavern for sale. We love you all and appreciate your support and kindness over the years. 45 years it’s been a great time!!” The post ignited an outpouring of love for Cedar Tavern on Facebook, including hundreds of likes and comments and dozens of shares.

The Cedar Tavern has been in Stachnik’s family since her parents bought it from the previous owners in 1977; she was just 12 years old at the time.

“On their decision to sell, it’s just time to pass it on to someone else – after 45 years in the family – so they can move to their next chapter,” Taylor Brown of Real Estate One tells the Leelanau Ticker on behalf of his clients; Brown is one of the listing agents for the property.

The Mill Glen Arbor
Another Leelanau County landmark, the historic grist mill in Glen Arbor, will officially open its doors a new restaurant this spring.

The Mill Glen Arbor landed in the local headlines in 2020 and 2021 as a group of Glen Arbor residents pushed back against plans by local developer Turner Booth to restore the property and reopen it as a restaurant, museum, and community gathering space. That debate about the mill and a neighboring property ultimately triggered a referendum vote regarding the zoning of the parcels. But voters sided with Booth on that matter, and the developer – who also owns and acts as steward of the historic mill – has been busy rehabilitating the structure ever since.

When the Leelanau Ticker last touched base with Booth in February of last year, he had teamed up with Fernhaus – a local boutique hospitality group – to develop a restaurant/café concept for the mill space. Now, things appear to be heating up for the project. In August, Fernhaus posted a series of 12 photographs on The Mill Glen Arbor Instagram page that, when viewed, together formed a grid picture of the restored Mill building (pictured, right). And on January 5, The Mill Glen Arbor posted an executive chef job­ on several online job boards.

“The Mill Glen Arbor is seeking an executive chef to help design, build out, and execute a 47- seat café/restaurant on the Crystal River,” the job listing states. “Formerly a flour mill built in the 1800s and recording studio in the 1970s, this iconic building has lived many lives and is currently undergoing a major restoration for its next one. The Mill will reopen its doors with an all-day café, gallery/museum, and lodging – with a focus on taking care of its guests with the highest regard while creating memorable experiences.”

So when is The Mill Glen Arbor opening its doors? The executive chef posting says that Booth and the Fernhaus team are entering “the final stages of finishing the renovation” of the mill now, while the official Mill Glen Arbor website includes the message “Coming Spring 2023.”

Other restaurant and retail news
>Though it’s presented by Downtown Traverse City, the annual Traverse City Restaurant Week (TCRW) has expanded its reach over the years – to the point where the list of participating restaurants regularly includes establishments located in East Bay Township, Williamsburg, and on Old Mission Peninsula. But while a few restaurants at the base of Leelanau Peninsula have participated in TCRW over the years, the culture of the event has never permeated deeper into the heart of the county. That changes this year: Lake Leelanau’s Nittolo’s announced at the beginning of January that it would be offering a TCRW menu this year. The restaurant is offering an “extended” TCRW promotion (February 22-March 4, versus the standard TCRW run of February 26-March 4) and will have a $45 four-course menu that can be viewed here.

>Bunting’s Cedar Market is officially the new public recycling site for the Village of Cedar. This past Friday, the Leelanau County Solid Waste Council moved Cedar’s recycling bins from the old recycling site (near the boat launch at Victoria Creek Community Park) to the new site on the back side of the Bunting’s parking lot. The site is now open for recycling drop-offs.

>A new sauna rental company is doing business in Leelanau County this winter. Begin Adventures Barrel Sauna Rentals offers both four-person and six-person sauna rentals, housed inside handcrafted cedar barrels. Rentals are available within five miles of downtown Traverse City, and details about bookings can be found on the Begin Adventures website. The new business arrives just months after Fox & Flame, another portable sauna rental business in Leelanau County, announced on its website that it would have to “temporarily pause sauna sessions and cancel all bookings” due to “unforeseen zoning issues.” Joe Buteyn and Crystal Mason, the owners of Fox & Flame, could not be reached for an update on their business’s situation.

>Numerous local establishments are rolling out new events or promotions to attract customers throughout the slower winter season. Every Saturday through March, Black Star Farms will host “an intimate three-course dining experience,” with a special chef-curated “prix fixe menu to accompany estate wines.” The dinners start at 6:30pm each Saturday and are limited to 22 people per night. This past Friday, meanwhile, Shady Lane Cellars in Suttons Bay officially launched its new Friday Night Live music series. That recurring event, which runs from 5:30-8:30pm the next four Fridays (through February 10) will feature local musicians like Andrew Lutes, John Richard Paul, and Jack Senff.

>One Leelanau business not feeling the winter blues is Dune Bird Winery in Northport, which announced last week that it has nearly sold out of wine due to unprecedented demand. “We blew expectations out of the water and have gone through inventory way faster than anticipated,” the winery said. The situation has caused the Dune Bird to plot “an extended winter break before our new vintage comes online end of March/beginning of April.” Dune Bird tentatively plans close at the beginning of February and stay shut down through the end of March, though specific dates for the closure could be affected by how quickly the winery goes through its remaining vintage. “An extended break will allow us some real rest after a big year and also allow for implementation of exciting new developments and strategy,” Dune Bird concluded.