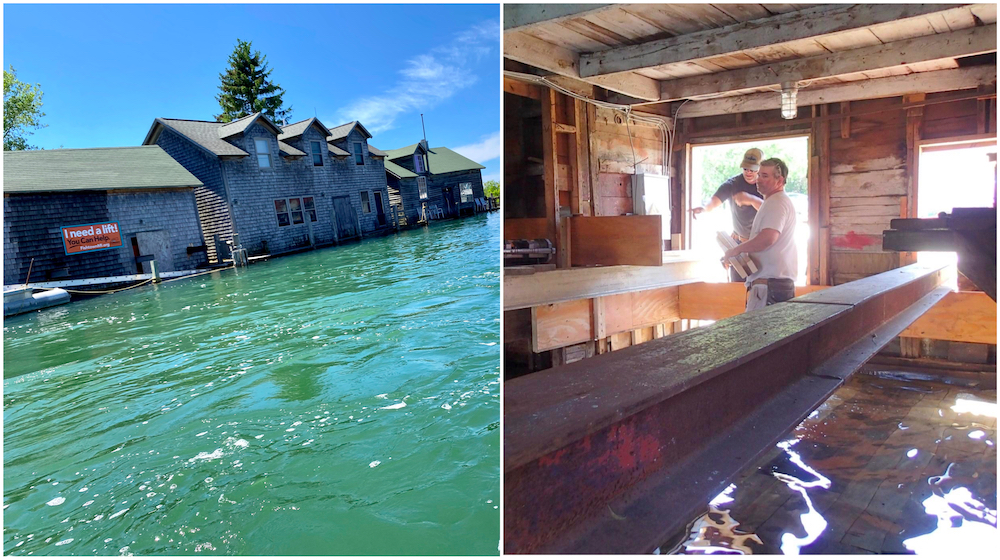 Fishtown’s Oldest Shanty Is Lifted To Dry Land This Week

Fishtown’s high-water adventures come to an apex this week as local contractors coordinate the intricate lift of the Morris Shanty from its flooded spot on the south side of the Leland River in order to resolve critical infrastructure issues. After its lift by crane, teams will install new pilings, a new dock and a higher foundation for Morris’s ultimate move back to safety. Amanda Holmes, executive director of Fishtown Preservation Society, catches us up during a busy week for Fishtown.

Leelanau Ticker: What context can you give locals and visitors when they see Morris lifted in the air this week?
Holmes: Fishtown Preservation is saving a treasure — the oldest shanty that remains in Fishtown. The shanty needed work before the waters started to rise last summer. The high water has complicated everything about the project, damaging more of the original building and making it more difficult to do the work. There is, however, a bright side. If the work had been completed before last year, we would not have raised it enough.

Leelanau Ticker: Wow, plot twist. Sounds like all involved are being eternally adaptable?
Holmes: Not only have contractors been catching up from the COVID-19 construction pause this spring, but Fishtown is a physically small space which limits how many projects can take place at once. Today, we are working out the logistics of getting the giant crane trucks along the little streets — where lots of people are usually parked — to the Morris Shanty lift site. This season promises to remain, as it has been, a wild ride.

Leelanau Ticker: When the Village Cheese Shanty was lifted last year, we discovered shanty-lifting as a spectator sport. When will this next historic lift take place?
Holmes: The lift is currently scheduled for Wednesday, July 22, but this will be weather dependent. I cannot give an exact time because there are so many things that the contractors — Biggs Construction and Kasson Contracting — have to do to get the building ready to lift, including craning key steel support beam over the shanty. It is a much more complicated project than the Village Cheese Shanty. We are still finalizing the schedule for getting the new and higher piles driven, as Team Elmer’s is not available until into September. Once the piles are driven, we need to build a new support system that will go on the piles — then the shanty can go back to its home on the river. We’ll do additional preservation work on the shanty once it is back in place.

Leelanau Ticker: Besides being the oldest shanty, what else might people not know about Morris at first glance?
Holmes: It is and always has been a hub of ongoing commercial fishing in Fishtown. Our commercial fisherman, Joel Petersen, put together a new trap net for JOY in that shanty. The shanty makes the work of getting out on the lake and fishing possible.

Leelanau Ticker: What’s the big picture for funding for Morris and other critical preservation projects right now?
Holmes: Costs have inevitably risen along with water levels and have now reached $3 million, which we’re funding through the Campaign for Fishtown. Yet to come are the Carlson Fishery, the docks on the north and south side of the Leland River, the West River Street drainage, retaining wall and landscaping. We’re also now investigating what it is going to take to deal with the water extensive damage to The Otherside and Ice House.

Leelanau Ticker: The Ice House is the shanty inhabited by Leland Gal, which moved to a temporary outdoor pop-up on Main Street for the summer. What’s going on now?
Holmes: Our architect and contractor will be meeting soon to evaluate the Ice House and develop a plan. Water is coming from so many sources—rain-driven through the walls from the south, road runoff from the north, and now seiches and rising ground water. There may not be any quick fixes. If the steps needed to preserve the shanty require EGLE/USACE permits then predicting any timeline will be difficult, on top of likely being much more expensive. But, if the water goes down it may be possible to make some repairs to make the space functional.

Leelanau Ticker: Water issues aside, how have Fishtown's tenants and shop owners been doing with the latest executive order and social distancing this summer?
Holmes: I stop in Fishtown each day. I've noted those entering the shops are paying attention to the signs and wearing masks. Since the executive order more people are wearing masks while outside in Fishtown, too. It can be crowded in Fishtown in the middle of the day when people are waiting for their Cheese Shanty sandwiches — they fan out far and wide, still wanting to be in hearing distance when their names are called.

Leelanau Ticker: What else is happening behind the scenes in Fishtown?
Holmes: Folks are coming to pick up their packets for the Virtual Fishtown 5K - Seiche Happens that started July 18 and goes through the 31st! We’ve had 590 people sign up so far and are still taking registrations. People can complete it whenever and wherever they like, but for those who choose to run the official race route, we’ve shared the map on our website.

Photos: Leland River with Morris Shanty by Emily Tyra; flooded Morris Shanty getting steel beam reinforcements in preparation for it being lifted to dry land this week, by Amanda Holmes