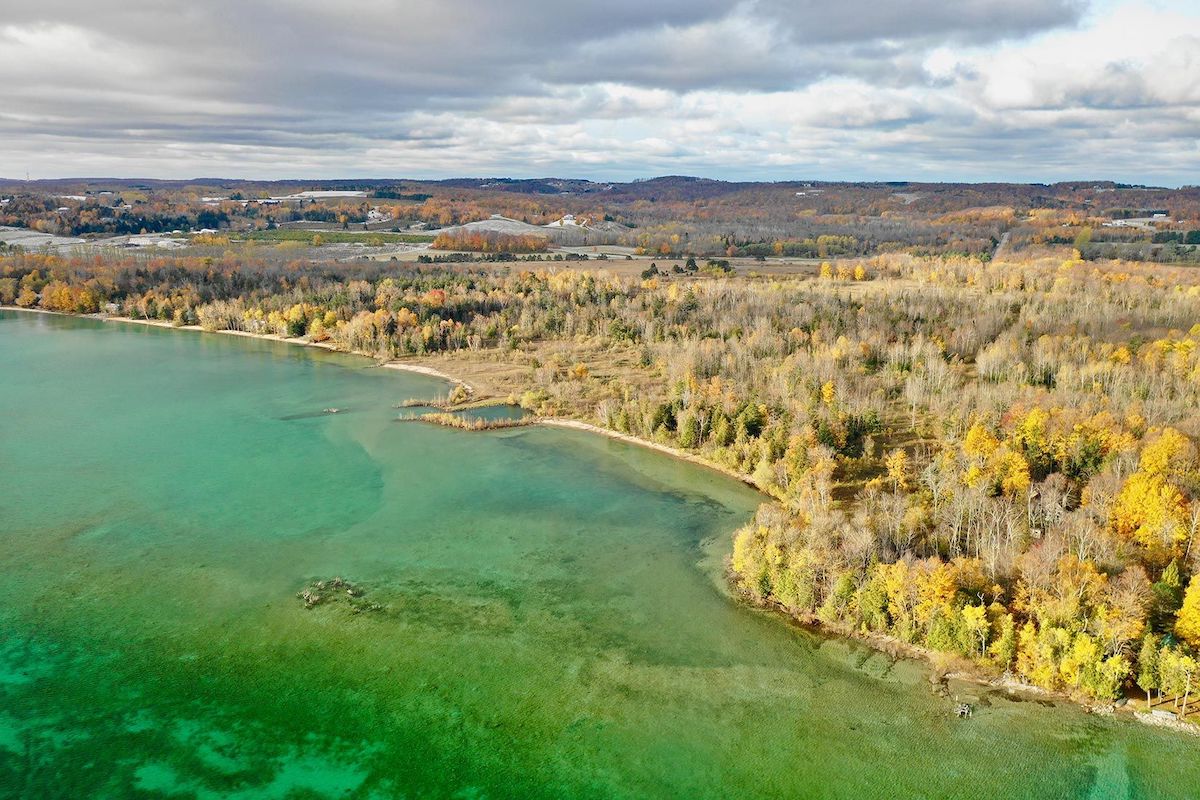 There are new developments on many fronts over the proposed 300-plus site Timber Shores RV Resort on West Bay near Northport. Leelanau Ticker shares the latest:

First up, the outcome of the lawsuit in which the township asked the 13th Circuit Court to decide if the previously recorded 1998 and 2006 sewer agreements associated with the current Timber Shores property are still binding today.

The suit revolved around two agreements which would require Timber Shores to be connected to the Northport-Leelanau Township Utility Authority (NLTUA) sewer at its own expense.

A motion to intervene was also filed on behalf of 63 property owners within 300 feet of the proposed Timber Shores development, who claimed their interest was not only to protect the well water of the adjacent property owners but also Ennis Creek, which runs through the property.

Last week Judge Kevin Elsenheimer ruled that the development agreements at issue were null and void and not enforceable.

Shares Leelanau Township Attorney Seth Koches, “This issue was very important to the residents of Leelanau Township and we respect the court’s attention to this matter in reaching its decision,” also noting, “Any new commercial development on the property will require a special land use permit processed and reviewed independently by the Leelanau Township Planning Commission.”

Tom Oehmke, attorney for the intervenors (whose own property also abuts Timber Shores) maintains the court ruling “is erroneous.”

He adds, “One party acting alone cannot…change a material aspect of a sewer agreement simply by signing a piece of paper and recording it with the Register of Deeds.”

So, stay tuned, Oehmke tells the Leelanau Ticker: “We will be filing a Motion for Reconsideration calling this error to the attention of the court and asking that the 2006 sewer agreement be upheld,” specifically, “the creation of a ‘special assessment district’ at Timber Shores…which ‘provide[s] authority in the township to specially assess benefitted properties in the [Timber Shores] district for all township assumed and incurred sanitary sewer costs.’”

Timber Shores sees Elsenheimer’s ruling as a clear victory. According to the attorney for the developer, Brion Doyle, “Timber Shores is excited to continue to move forward” and is prepared to build its own wastewater treatment facility on the property, going through rigorous review and permitting by the Michigan Department of Environment, Great Lakes, and Energy (EGLE).

Overall “our hope is that Timber Shores’ latest victory in court will help to convince the township to work with us toward a development that will benefit the community at large,” he says.

Still, Oehmke maintains the path forward for the developer is less than clear, noting “the planning commission could order Timber Shores to pay to expand and connect to the NLTUA system because these 200 acres are environmentally sensitive.”

Meanwhile, completely apart from the litigation, Leelanau Township planning commissioners had a public hearing on Feb. 10 and — after considerable public comment — recommended the township approve proposed amendments to the zoning ordinance. These amendments would affect RV parks as a special use in the commercial resort district. The most notable changes, according to Zoning Administrator Steve Patmore, pertain to wetlands and park models.

They also aim to limit the number of the more permanent “park models” allowed in a campground.

Doyle says the township’s justification for this entire process — the moratorium, the amendment, the lawsuits — is the protection of the public health, safety, and welfare, yet “a number of elements of the proposed amendment to the commercial resort zoning district were seemingly put in place to hinder the only landowner/developer of any significant commercial resort property in the township.”

Patmore says, “We are trying very hard to look at the commercial district in general and not the specific Timber Shores project.” Of course, Timber Shores will need to follow any of the newly adopted zoning ordinance amendments. “They would apply to any campground,” he says.

“That might require eliminating the tent camping space, or limiting the number of cabins,” he says. “We included cabins in the plans because of the limited options for overnight lodging in the Northport area. We also hoped that by including cabins that would help ease concerns about traffic.”

Small, shallow basins and rain gardens are currently designed to protect wetlands from direct road runoff and to maintain water quality in the streams on the property and Grand Traverse Bay. “However, given the prohibition of any impacts within the 10-foot grading setbacks, construction of these important stormwater control measures in the locations where water will flow into them has significant impacts on the road layout and site plan for Timber Shores and other similar projects. Site plan review for the purpose of granting variances for the temporary encroachments would undoubtedly be a cumbersome process that would throw this issue to the Zoning Board of Appeals.”

Patmore agrees that “the grading setback is going to impact [Timber Shores’] plans but I think the township will be fair in reviewing any variance requests.”

All told, Doyle assures that Timber Shores “is evaluating all of its options with respect to the proposed amended zoning ordinance. Timber Shores will always look first to try and resolve disputes, and there has been considerable communication to do just that at every step of the way.”