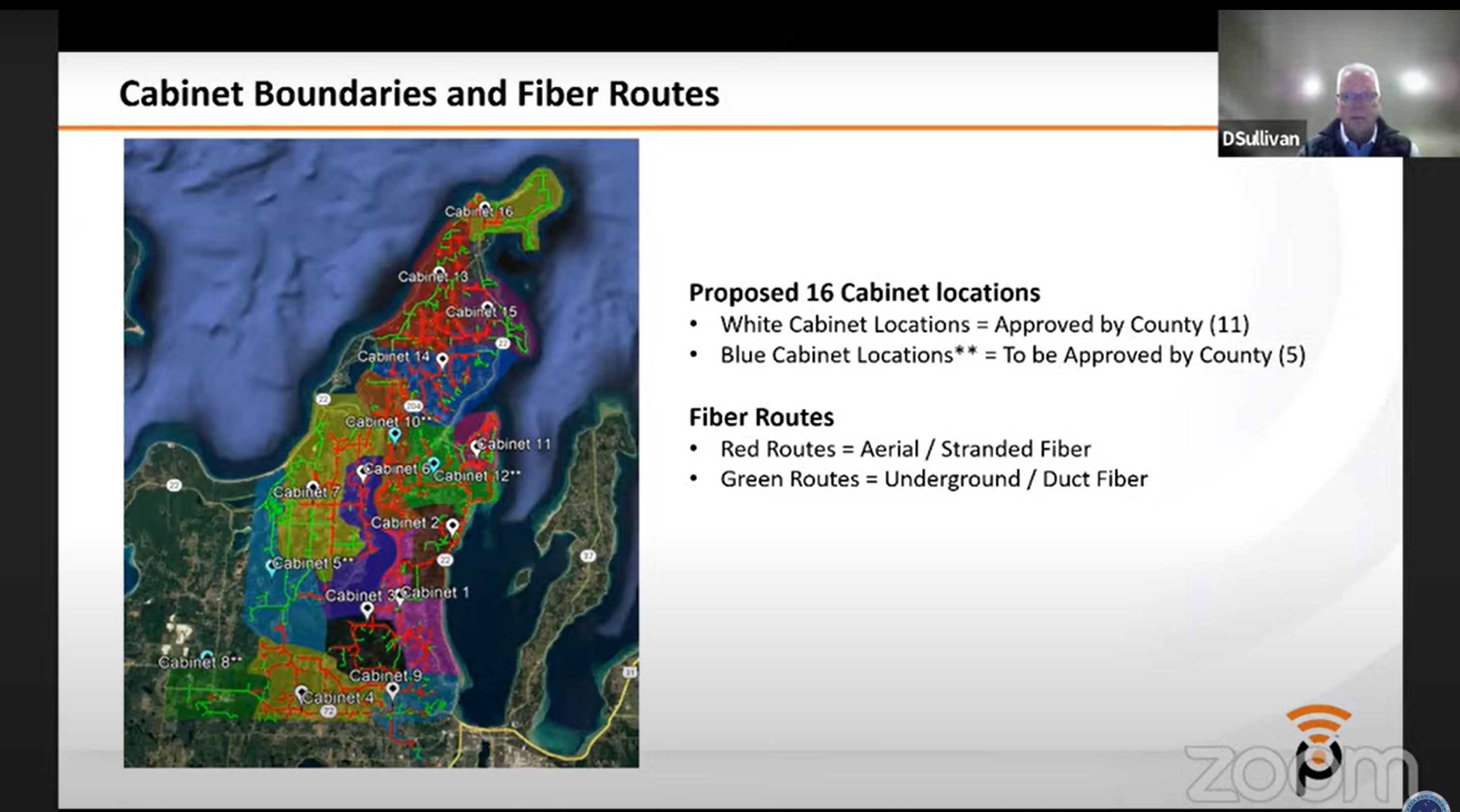 That was the core message delivered on Tuesday evening as representatives from Point Broadband, the Leelanau Peninsula Economic Foundation (LPEF), and the Leelanau Internet Futures Team (LIFT) presented a wide-ranging update on the progress and plans to construct a brand-new high-speed fiber internet network in Leelanau County.

The project, funded in part by American Rescue Plan Act (ARPA) dollars and which will bring high-speed internet accessibility to more than 8,000 unserved or underserved homes throughout the county, is slated to roll forward in Q1 of this year and should be completed by no later than December 31, 2023. County residents can expect to see construction crews within weeks and throughout the rest of the year, and consistent progress updates.

Last year, the Leelanau County Board of Commissioners voted to allocate the majority of the county’s $4.2 million in ARPA dollars toward a fiber buildout. The county teamed up with the Alabama-based Point Broadband, a fiber provider with networks serving tens of thousands of customers across eights states. Point Broadband is footing the bill for the majority of the network’s estimated $17.4 million capital cost, with Leelanau County only on the hook for $5 million. $3.2 million of that money comes from ARPA funding. The county also hired a consultant – Chris Scharrer of DCS Technology – to serve as county broadband manager. Scharrer is overseeing the buildout and acting as the key point of contact between Leelanau and Point Broadband.

At Tuesday's board of commissioners meeting, Scharrer and several associates gave an update via Zoom to give a presentation about the status of the fiber project. The team laid out a roadmap for the 2023 fiber network buildout and for what locals can expect.

Dan Sullivan, Point Broadband’s general manager for the state of Michigan, said that numerous “pre-engineering” tasks ultimately made a 2022 start date impossible, but that said a Q1 start and an end-of-2023 completion is on-target.

Key pre-engineering steps included a “walkout survey” to map the routes that the fiber network will take throughout. Point Broadband finished out that survey in December, tallying a total of 462 miles of fiber that will soon run through Leelanau – including 243 miles of proposed aerial fiber and 219 miles underground. All told, the fiber will pass 8,035 Leelanau County homes – more than 3,000 of which currently have no broadband access options at all.

Point Broadband is now securing permits; in the case of aerial fiber, that means getting approvals from Cherryland Electric to use the cooperative’s poles to hang the fiber. Sullivan said Point Broadband has secured 350 pole approvals so far, out of 3,266 applications, and that Cherryland is working hard day in and day out to get through the remaining applications quickly. In the case of underground permitting, Point Broadband needs excavation permits from the county and from local townships and villages to move forward – a process that is also underway.

Pivotal to the buildout are installations of fiber “cabinets” throughout the county. Cabinets sit on the fiber network and contain switches and ports that connect homes with the network. Each cabinet, in other words, is essentially the connecting point between a home or neighborhood and the fiber network, which in turn connects customers to the internet. Per Sullivan, each cabinet can serve 500 or more customers in a 2-5-mile radius, depending on population density. To serve its full planned network, Point Broadband will need to install 16 cabinets throughout the county, starting in the southeast and snaking north through the county (cabinet map pictured).

The very first step in the buildout will be the installation of what Point Broadband has labeled as Cabinet 9, located near Traverse City West Middle School. The company plans to kick off that part of the project sometime in Q1, “when weather permits.” From there, Point Broadband has a tentative buildout schedule planned for the rest of the year. Cabinets 9, 4, 8, 7, and 5 are on the schedule for Q2; cabinets 6, 10, 13, 15, 14, and 16 are slated for Q3; and cabinets 12, 11, 2, 1, and 3 will be installed during Q4. Fiber service will the come online for households around each crop of cabinets as they are built.

“Once we get started, we will move quickly,” Sullivan promised of the buildout. “It’s a little bit of an aggressive schedule, but one we think we can keep up with, as well.”

Point Broadband’s 2023 to-do list also includes plans to set up a local presence. Because the company will be acting as the internet service provider for local households, Sullivan said it is important to have boots on the ground to manage the network and respond to customer concerns as they happen. As such, Point Broadband is working to find a commercial/retail operations space “somewhere in the middle of the county” and will soon hire both a locally-based network manager and multiple network technicians.

How can locals keep up with the latest progress? Soutas-Little encouraged residents to follow both LPEF and LIFT on Facebook, as well as to sign up for monthly email updates by sending a message to the address broadbandproject@leelanau.gov.

Leelanau County will also be launching a new website focused on the new network in the next few months, and Point Broadband has an online mapping tool residents can use now to find out whether their address will be served by the new network. Scharrer also said that Point Broadband expects to update the mapping tool as the project moves forward – both to show where construction has finished up and to provide estimates for when individual properties are expected to be serviced.