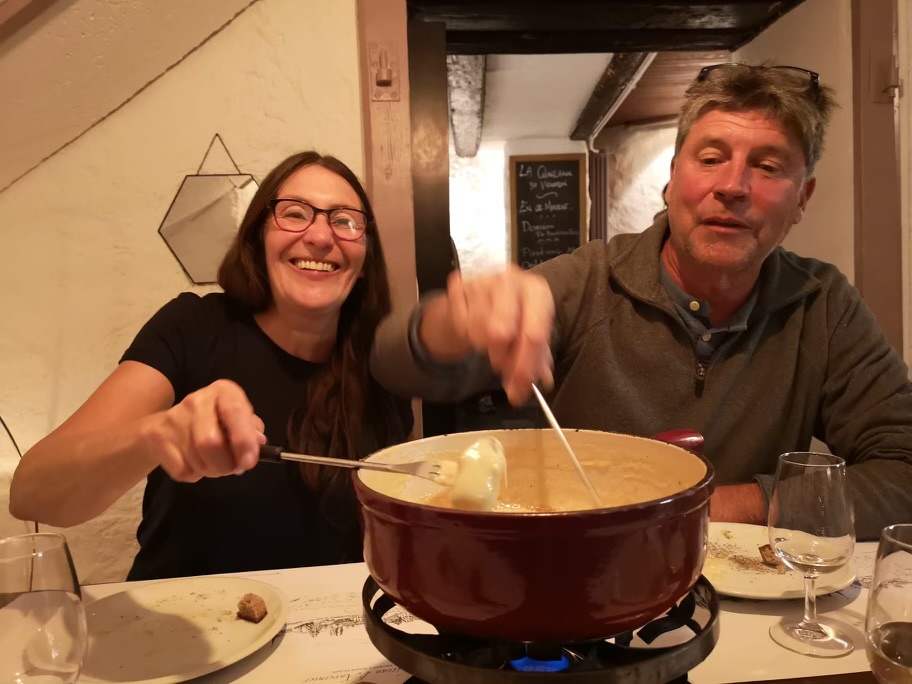 Life Après Cheese: Keeping Up With The Hoyts

They are the king and queen of Leelanau County cheesemaking, yet remain the most humble of monarchs.

As the first Euro-style cheesemakers in the area, Anne and John Hoyt started creating their Leelanau Cheese nearly 27 years ago in a converted gas station in Omena. They later moved to Black Star Farms in Suttons Bay, where tasting room customers could watch them behind glass as they stirred their curds. Eventually they moved to a facility of their own just down M-22.

For many years they were the county’s only cheesemakers, until Amy and Mark Amy Spitznagel founded Northport’s farmstead goat creamery, Idyll Farms, in 2012.

The Hoyts — and now their successors, too — specialize in cave-aged raclette and French-style savory soft spreads. They minimally marketed and advertised their products, yet the accolades kept rolling in. Newspaper and magazine writers raved about their cheeses, as did TV and radio hosts. They amassed national and international gold medals for their aged raclette — and they put in 10 to 14 hours daily, doing loads of heavy lifting, trips to farms for milk, deliveries to all the stores that carried their cheeses, shipping orders, and they did this seven days a week for all those years.

Then in June, the Hoyts announced that Michigan State University cheesemakers Josh Hall and Gary Smith and a group of partners would be taking over the business.

“It was not easy to sell it,” Anne now admits. “I cried for about six months. I was in mourning. We sold our baby.”

In mid-August, the couple departed for a three-month journey to France, Spain and Eison, Switzerland, where the Hoyts first met at a cheesemaking co-op 35 years ago. Anne had been a chicken farmer and was a shepherd at the time, and John, who grew up in Detroit and majored in French at Wayne State University, had already begun cheesemaking and lived in Europe for 10 years.

“It was a beautiful trip, very romantic and nostalgic,” says Anne, now 60, “A little like a pilgrimage.” They visited her hometown, Roubaix, in the Lille metropolitan area near the Belgium border in the north of France, and then headed south to Aveyron, where Roquefort cheese is made, and it felt so right. They are hoping to find a place there to live, at least part of the year.

“It’s a little warmer and it’s back to the French lifestyle. John [now 63] hadn’t been back for 15 years, and he had only gone twice since we started our business. You forget how nice it is there — it’s very pretty, the lifestyle is very rural, and you don’t talk about local food, you just eat it.”

That trip helped the Hoyts through their mourning process. “It was a huge, huge step,” says Anne. “Finally I’m feeling comfortable.”

Since their return, the couple has been tying up all the loose ends of their business, offering help to the new owners, enjoying this respite that they don’t want to call “retirement.”

“We’re too young for that word,” Anne laughs.

Reflecting on the changes she has seen in the county in the last 27 years, Anne worries about all the Airbnbs that have been turned into summer rentals that are too expensive for local workers, so they have no place to stay. “It’s kind of a weird cycle. There’s no work force, nobody to even clean the Airbnbs.”

She also mentions that visitors get mad because restaurants aren’t open seven days a week, for the same reason: The area needs a year-round work force. “It’s been a problem for years.”

Anne is also concerned about the farms that have been sold and turned into wineries and breweries. She wishes there were more food producers. “I would love to see more dairy farms, too,” she muses, “but I doubt that will happen because of the price of land. We had to drive about an hour and a half for our milk, all the way to Cheboygan and Lake City.”

Even so, the Hoyts still cherish their life in Leelanau. Right now, John is converting a small pantry in their old farmhouse into an office. Anne is overjoyed that she can read a book in the middle of the day (her latest fave is Braiding Sweetgrass, by botanist Robin Wall Kimmerer). She volunteers at the Leelanau Christian Neighbors food pantry. They are snowshoeing and hiking. They’re also visiting good friends and helping neighbors when they need it, something for which they’ve never had the time.

Oh, and the Hoyts are still very much into cheese. Anne says they “overdid it” on the amazing varieties they sampled in France, and of course, Switzerland (see above!). They hint that they might be cooking up another project — keeping a foot in the food industry, but nothing with the public, strictly behind the scenes. To be continued, they say.