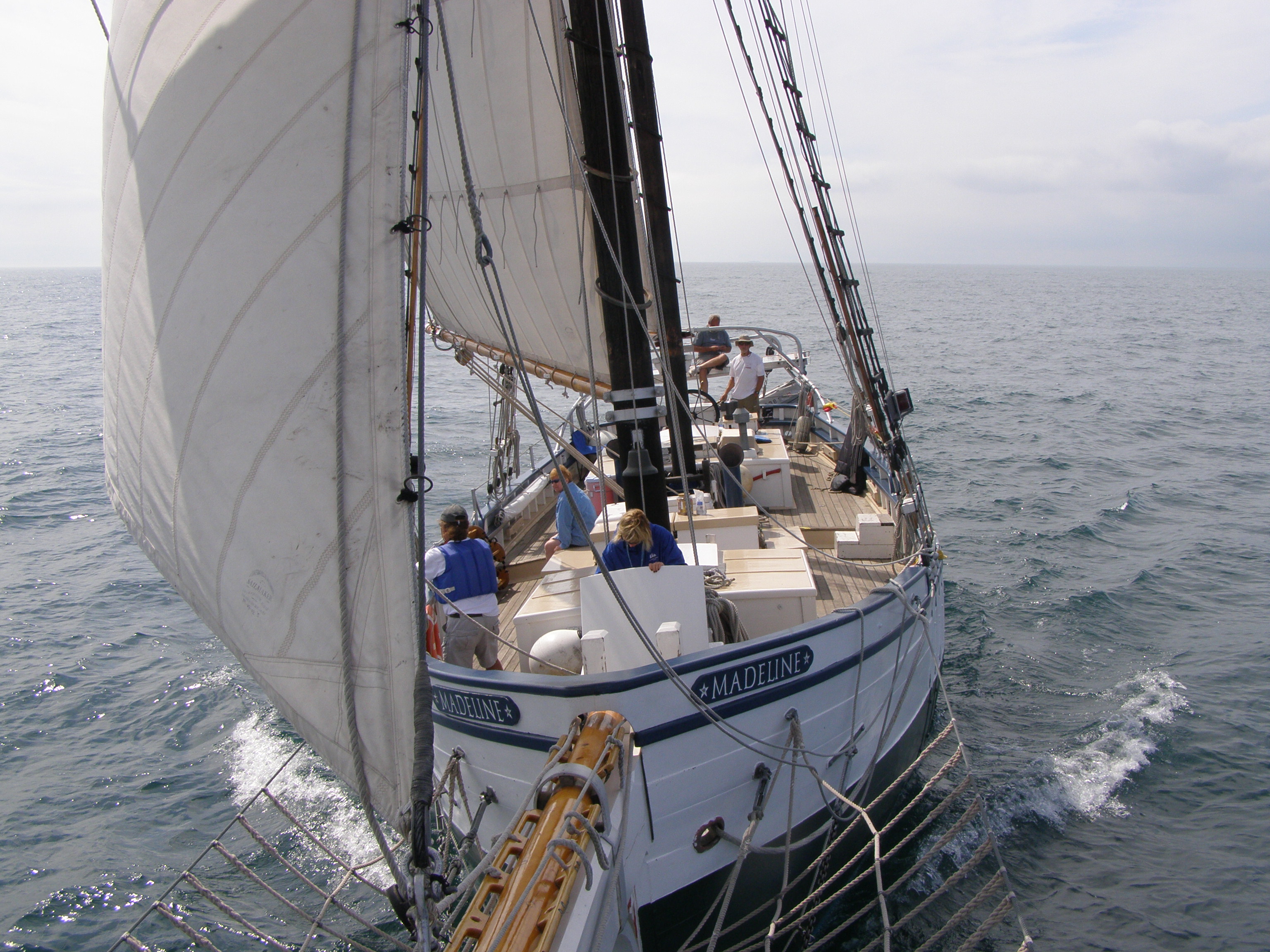 Madeline Turns 30 With A Nod To A Much Older History

The former plied the waters of the Great Lakes a century and a half ago, including a significant time spent in the Traverse City region. The latter is celebrating 30-plus years of sharing with visitors of all ages the story of the original Madeline and the region’s marine history.

And it is a rich history. Just a century and a half ago, the waters were filled with ships like the Madeline. More than 2,000 schooners could be found on the Great Lakes.

Today’s Madeline is not a reconstruction of the former, but a reinterpretation of her historic namesake and the other ships that once sailed the Great Lakes.

The ongoing project of the non-profit Maritime Heritage Alliance is once again floating on the waters of Lake Michigan at her berth at Discovery Pier on West Grand Traverse Bay. She serves as Traverse City's goodwill ambassador as Michigan's first official tall ship.

Not bad for the brainchild of a few maritime enthusiasts who gathered in the 90s to share their love of watercraft. They eventually decided to pool their knowledge and free time, constructing a 20-foot Mackinaw Boat dubbed the Gracie L.

Their next project was more ambitious. “Bob Core, Rich Brauer and I decided it might be interesting to build and recreate a boat from 1880,” says Steve Harold. Harold was one of the founders of the group that became the Maritime Heritage Alliance, and today remains actively engaged in researching in and writing about history.

“Steve brought up the Madeline,” says Brauer. The original Madeline wintered in Bowers Harbor in 1851-52, where the five-man crew spent their time learning reading, writing, and arithmetic. It was the first non-Indian school in the region, and all the crew members went on to successful careers on the Great Lakes.

Laura Quackenbush, another early member of the group, says they were able to research the history of the original Madeline and other such watercraft, though the actual plans for it were never found. “We based the design of the Madeline on all the sources (that could be found). It is a reconstruction of such a boat, not a replica,” she says.

The group enthusiastically endorsed the idea, which grew into a five-year effort from 1985 to 1990 that included research and thousands of hours of volunteers building a boat. Many of them had never tackled such a project before, and did so with traditional methods and materials, such as the largest order of white oak anyone had needed in years. “I call her the boat built on faith,” says Quackenbush.

It also involved money. Lots of money. Fortunately, the group found a source. “We had the ear and the faith of Jerry Oleson,” Quackenbush notes.

Brauer often found himself appointed to secure the funds. “I was the point person to meet with Jerry Oleson. He’d say, ‘What do you need?’ Then I’d go pick up a check,” Brauer recalls. “He realized we were on to something.”

Indeed they were, though it’s likely none of those involved realized what the Madeline would become in the years ahead. Since the original launch in 1990, she and her volunteer crew have sailed thousands of miles on the all five Great Lakes as Traverse City's goodwill ambassador and one of the state’s tall ships. Thousands of visitors have come aboard her in the 60-plus ports she has visited, learning about the history of boating and boats of every shape and size over the years.

And it goes back to those initial forays into boat-building. “It’s just the nature of it. It’s a volunteer effort. When we needed things, they came,” says Quackenbush.

The Maritime Heritage Alliance fleet today includes not only the Madeline and the Gracie L (named to his surprise for Brauer’s daughter, a frequent visitor as a toddler), but three others donated to the organization: the Arcturos, the Champion, and the Witchcraft, the lattermost of which is currently undergoing restoration. A sixth, the Welcome, a replica of the late 1700s armed sloop, was donated to Emmet County.

As the Madeline readies for a year on the water following two years at her dock due to COVID, those connected with the schooner are anxious to continue sharing her story and the history of maritime activity on the Great Lakes.

For his part, Harold continues to research the maritime history of the region. He confesses to one regret. “I had a once in a lifetime trip to Europe booked” back in 1990, he says. The timing was anything but perfect. “She (Madeline) was launching the day I left.”