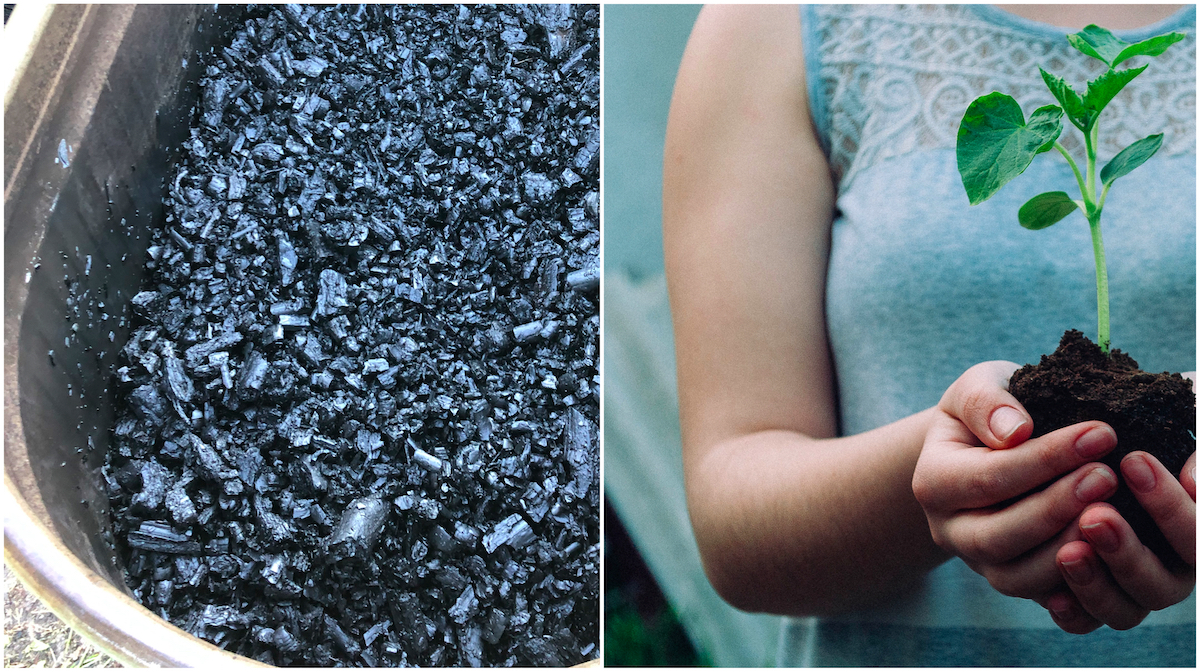 Today kicks off National Biochar Week, and — to nourish a budding “biochar movement” here in Northern Michigan — the Grand Traverse Conservation District (GTCD) is hosting a meeting of the minds via Zoom this morning, Monday, Dec. 7.

Among the dozen-plus local leaders attending — including foresters, farmers, conservation district employees, and property owners — is the man who GTCD Executive Director Koffi Kpachavi calls the “Godfather of Biochar” in the region. Tim Overdier, a retired soil scientist, is a producer and promoter of biochar in Northport. He, along with Paul May — who produces and uses biochar on his grass-fed beef farm in Frankfort — are the self-coined Biochar Guys.

But, what’s this thing they call biochar?

Biochar is simply woody material which has been turned into a substance similar to charcoal via a specially monitored smoldering heat. Biochar is created as an agricultural soil amendment, which, Kpachavi explains, “can play an important role in soil health, carbon sequestration, reduction in the level of fertilizers farmers put in the soil, and much more.”

Overdier tells the Leelanau Ticker, “Biochar is like a natural forest fire. It rejuvenates the ecosystem, it adds carbon, compacted like a honeycomb with millions of pore spaces of many sizes, that provide housing for microbial diversity, increase water and nutrient holding capacity, and build a long-term stable carbon substrate that maintains soil health.”

Over time, he says, microbes move in and fungi develop networks of electrochemical nutrient pathways, feeding plants just what they need in the right combination.

For that reason, it’s been described as the “Swiss Army knife” of both soil and climate solutions. And it has some early adopters in the region, specifically in Leelanau County.

There is Overdier, of course, who began experimenting with it in planting trees on his Northport property four years ago. “My ground is a former orchard that was so sandy and windswept that it failed as a cherry producer,” he says. “My trees are much better off with biochar. Most of the seedlings survived without much extra water in poor soil.”

Overdier creates his own biochar with a specialized kiln, using debris from his own woodlots and scraps from neighboring Thomas and Milliken Millworks in Northport. “They are glad to see the stuff put to good use,” he says.

Overdier’s biochar also goes to Krull’s Composting in Maple City, where Barry Krull uses it in Millennium Compost — a char-enhanced compost with twice the total carbon as normal compost. This compost has been promoted at the Northern Michigan Small Farm Conference for two years and now has a cult following among growers in the region.

While the name “biochar” was coined in 2005, it has been in use by Indigenous Peoples in the Amazon for centuries. Now, Overdier says, “like any good innovation, it solves a timely need and links the past to the future.”

What excites both Overdier and Kpachavi about creating and using biochar in Northern Michigan at scale is the double whammy of environmental-economic benefits. Says Overdier: “Biochar offers the potential to manage local tree waste as a resource, turning it into high-value, marketable carbon products that improve soil for lawns, gardens, agricultural, and landscaping applications.”

Kpachavi says at the working session he’s leading this morning, the focus is on entrepreneurial opportunities, and “laying a foundation for the work ahead to bring biochar into the mainstream.”

He adds that “biochar’s huge role in combating climate change and the fact that we currently have so much forest product going to waste in our region, makes biochar a very compelling choice, I think.”

Kama Ross, district forester for Leelanau, Grand Traverse and Benzie Conservation Districts agrees. She champions the idea of a portable biochar kiln, “that could travel from orchard, to vineyard, to farm, and could be used to process Leelanau’s orchard and ag waste onsite.” She also sees a win-win in using biochar kilns to process autumn olive, one of the region’s top invasive species, into biochar to return to the soil.

Meanwhile, in forestry applications, Kpachavi says, usually the slash from a tree harvest is burned to ash, buried or left to decompose. “The burning to ash, especially, is a monumental waste. We need to work with the forestry industry to redress this.”

Municipalities and homeowners also burn off brush piles, says Overdier. “We work so hard to rid ourselves of this ‘waste’ material that has so much value for increasing our yields and building our soils for current and future generations.”

The fire to create biochar uses a top-down approach and is extinguished at a precise moment before the biochar is rendered to ash. Both Ross and Kpachavi stress that because of risk of forest fire, making biochar is best suited to specialized kilns with trained operators, and with an immediate nearby water supply.

Biochar kilns come in a wide range of capabilities, capacities, and costs: $150 to $1 million. WarmHeart Worldwide and Wilson Biochar produce some of the more basic, affordable units. Kpachavi says the pricier professional kilns can even capture the energy generated during the burn process and convert it to electricity.

As inspiration for expanding biochar capabilities in our region, Overdier cites a larger-scale carbon industry model that has emerged over the last six years. “Cool Planet, a startup invested in by Google, Exxon Mobil, USDA secured loans, J.R. Simplot, and others was bought in 2020 by a Minnesota firm with a subsidiary in Marquette, Michigan, National Carbon Technologies (NTC),” he says. “Cool Planet developed 50 patents for processing, inoculating, buffering, and pelletizing biochar for agriculture.”

He adds that now NCT is “looking to develop the ag and other uses. For example, carbon is used to strengthen steel, rubber, and concrete. It also has applications for wastewater and hazmat cleanup.”

Overdier adds, “We need additional ‘technology’ — specialized equipment and procedures for burning, processing, and applying biochar at a scale that is compatible with existing on-farm workloads. This could also prove to be a business potential for youth or youth employment organizations in the area, such as SEEDS.”

Kpachavi says seeking investors is among the next steps. “This is the beginning of what I hope will be a long and fruitful collaboration to advance biochar in our region,” he says. “My dream is to have our region become the ‘Silicon Valley’ for biochar.”