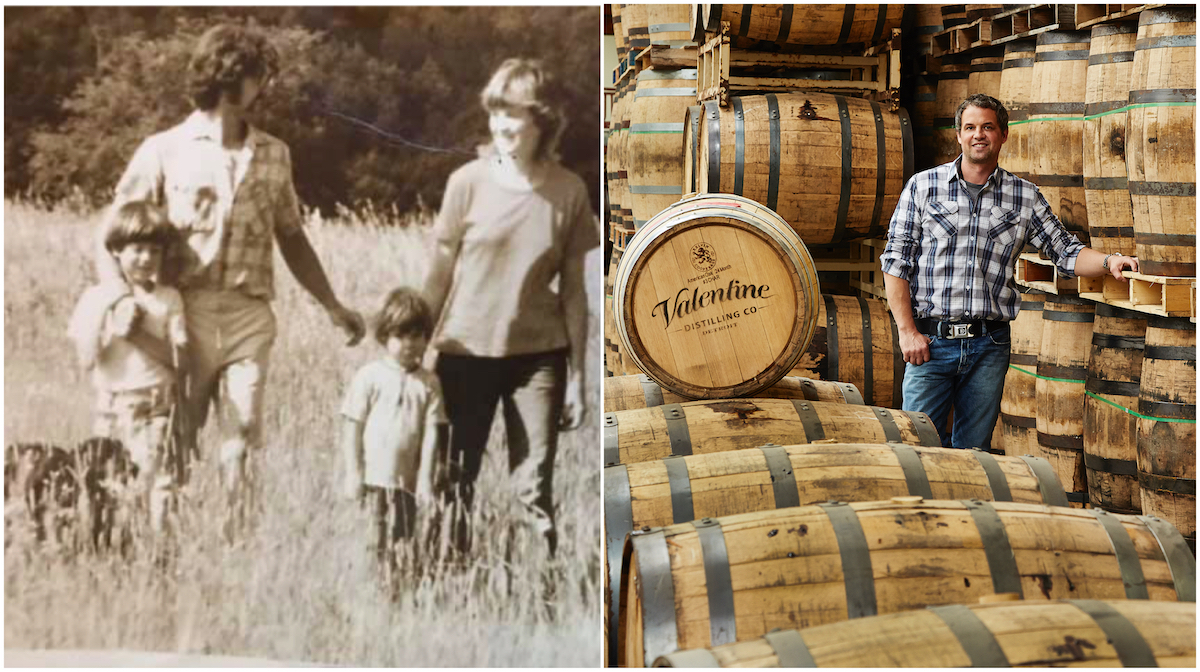 He grew up living off the land with pioneering parents Nello Valentine and Margaret Patchin in Cedar — many local families have memories of buying their Christmas tree from Valentine Tree Farm.

But Rifino Valentine became a pioneer in his own right in 2007 when he started one of the first craft distilleries in the country, Valentine Distilling Co., in Detroit.

Now, at his 20,000 square-foot production facility in Ferndale, he’s still doing his thing in small batches, using old-world techniques, but Valentine is also paving the way for green distilling, recently investing in a piece of equipment that will recapture 95 to 98 percent of water lost during the distillation process. For a distillery of Valentine Distilling Co.’s size, it’s projected to save 4.75 million gallons of water over a 10-year period.

We caught up with Valentine to find out what it was like growing up in Cedar, how his hometown shaped his career, and, of course, what he’s sipping this holiday season.

Leelanau Ticker: What was it like growing up on a classic Christmas tree farm?
Valentine: My parents moved up there in the 60s, with the whole idea of living off the land. We had goats for milk, raised our own chickens, had an apiary. Right from the beginning, their thought was, all this advancement might not be good for us, for the land, for our food supply. That was a huge influence.

Leelanau Ticker: Did they actively teach you those ideals?
Valentine: We lived that way. I remember watching my mom slaughter the chickens and milk the goats. When I was a kid up there, half the kids in high school, their parents were farmers, so there was always the underlying current of a solid work ethic. I went to Glen Lake, K-12 — Go Lakers! — and I’ve got to give a shout-out to my coaches. Without that farm work ethic, paired with the strong character-building from our athletic coaches, I would not have ended up where I am. I was recruited for wrestling at Cornell, so that little decision I made to go on the wrestling mat in 4th grade at 9 years old, would later shape my life.

Leelanau Ticker: Did you study business at Cornell?
Valentine: I studied economics. I moved to New York and worked on Wall Street from ’95 to 2005…then started working on this business plan in 2005 and 2006.

Leelanau Ticker: What was the impetus of that business plan?
Valentine: Dirty martinis. Going into bars in New York City, especially the classic bars — like the Rainbow Room — where the bartender is 60 years old and has been making cocktails for 40 years. I’d go into and say, ‘give me your best vodka in a Dirty.’ It didn’t take long to see ‘the best’ was just marketed the best. It was typically imported and usually owned by a liquor conglomerate. I knew we can do better than this. That was the whole idea with this company. We need be profitable, but let’s prioritize the product first and return to the manufacturing of years ago.

Leelanau Ticker: And the quality that comes with that?
Valentine: Detroit, Chicago, Milwaukee, Pittsburgh. These were the cities that built our country…and everything we do at our production facility in Ferndale, would have been done in alcohol production 200 years ago.

Leelanau Ticker: And now you have chosen to invest in green distilling. Did living with Lake Michigan in your backyard while growing up inform that?
Valentine: The whole county is connected to nature, and the land…it’s where it starts. Both of my parents were pioneers in that way. The area had been farmed pretty heavily, so in thinking about soil conservation, they had a tree planting crew. They planted trees all over the place. Flash forward to today, all of the things people like them were talking about 40 years earlier, are coming to fruition. So, it’s time to start making choices to be part of the solution.

[Editor’s note: in the May 2018 edition of The Grand Traverse Journal, Stewart A. McFerran tells of his experience with the Valentine tree-planting crew.  A conservative estimate is that from 1974 to 2004 the crew planted 2 million trees in Leelanau, Benzie and Grand Traverse counties.]

Leelanau Ticker: That tree crew sounds legendary, like Johnny Appleseed. Were you recruited to help?
Valentine: Before I was able to hold a shovel I was out there with the crew. As soon as I was able to hold a shovel, it became a job. Actually, a job that continued, with one of my good friends, from grade school through high school. It’s funny to see those trees now at 20 to 30 feet tall. When I was home from college, then I’d be part of the Christmas tree business.

Leelanau Ticker: And like many Cedar natives, do you come home for Polka Fest, too?
Valentine: [Laughs] Yes, Cedar Polka Fest is usually on the schedule.

Leelanau Ticker: And Valentine Distilling Co is an official Cedar Polka Fest sponsor, yes?
Valentine: Yes, Kathleen [Bittner-Koch at Cedar’s Polish Art Center] really spearheaded that. It’s a lot of fun, and it’s nice to see it A) continue and B) start to grow again. This year it didn’t happen, but we will be there when it starts back up.

Leelanau Ticker: How much is Michigan a part of the Valentine brand?
Valentine: We source as locally as we can, sourcing grains primarily from Michigan or in the Great Lakes Basin, but there are things we can’t get here. Last year, for example, was a horrible season for rye in Michigan in particular. We are a regional manufacturer: I never want to frame our business as local. To me that was baked into the cake. When you manufacture here, of course you source close to home, but not because they are local. Let’s show the rest of the world we still make the best stuff in the world here, and bring the benefits of manufacturing back. I never wanted somebody to have the decision of, well I really want to buy the best thing, on the other hand, I want to support local businesses. I wanted to make sure we rolled that into one. You are getting quality product, that is more environmentally friendly, and supports the local tax base, labor base, and supplier base.

Leelanau Ticker: What’s Christmas like at the Valentines?
Valentine: We are not getting up there this year, but usually we go back up to the farm in Cedar and celebrate it. In any year we celebrate, it’s traditional Italian: pasta and gravy, raw clams, and raw oysters. My dad crew up in Cicero, in Illinois. I took over the cooking from my grandmother and my great-aunt — they are the keepers of the family recipes. My grandmother passed away a little while ago, but my great-aunt is going to be 100 this year. I do the gravy — the pasta sauce — and my brother does the cannoli.

Leelanau Ticker: What’s a really delicious cocktail you like to make this time of year?
Valentine: Especially in the winter months, I start tending towards the aged spirits. Bourbon Whiskey. In fact, whiskey is what we have been producing the most of. I stay pretty classic, a Manhattan or an Old Fashioned in front of the fire. That’s where you want to be.