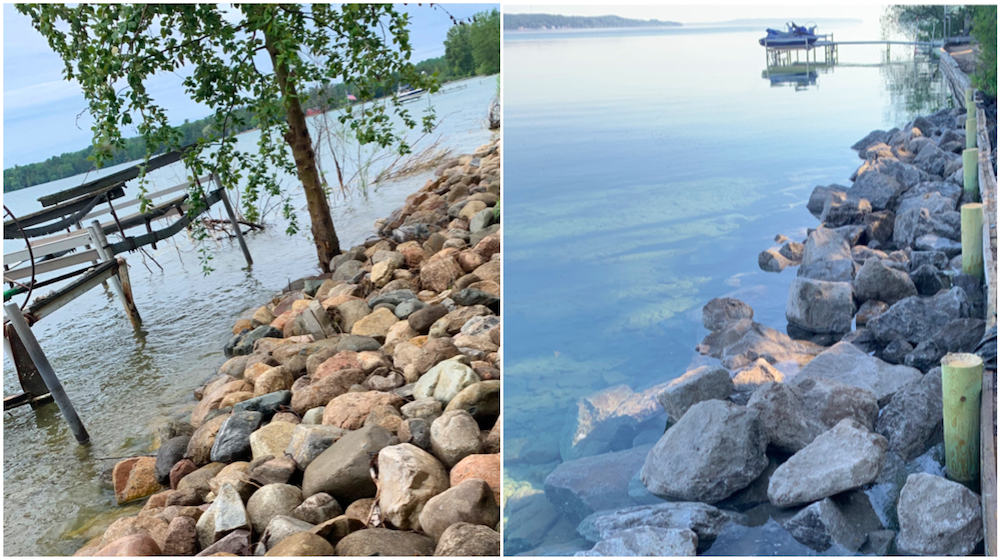 Rising waters are prompting property owners to invest in shoreline protection projects, but the recent flood of permit applications has alarmed some locally, who say these projects can have a lasting impact on the nearshore habitat and even the sandy beaches that characterize the peninsula.

Shoreline protection applications tracked by the Michigan Department of Environment, Great Lakes and Energy (EGLE) have gone from 475 in 2017 to 730 in 2019. In the first half of fiscal year 2020 alone EGLE already received 1,058 permit applications.

Right here in Leelanau County, those numbers are climbing, too. EGLE estimates it will have received 87 permit applications from Leelanau County residents just during the first three quarters of the 2020 fiscal year, with an additional 86 from Grand Traverse County.

Though permits have increased, EGLE reps say they are keeping an eye on the environment.

“So, for example, if someone wants to put in a vertical seawall, in most cases they would have a feasible and prudent alternative by using riprap or large stone,” Sanders says. “Those are comparatively less impactful alternatives because they are more natural material, they reduce some of the near-shore scour.”

Smith and her colleagues encourage property owners to aim for natural shorelines, in part because the process of “hard armoring” shorelines can destroy native near-shore vegetation. Says Smith, “Seawalls and large revetment structures tends to reduce habitat complexity. All of our Great Lakes fish, including major sports fish, use the nearshore area as nursery habitat. This complex nearshore habitat is critical for the health of our lakes – and removing specific components of this habitat, like submerged vegetation or fallen trees that becomes woody debris, can and does negatively impact our lake.”

She adds, “The best thing to do if there are no buildings or infrastructure immediately threatened by high water, is live with a little erosion in these high-water years, if possible, knowing that our shorelines are ever-changing.”

Hard armoring also might not be the most neighborly deed: a hardened shoreline doesn’t dissipate wave energies, but sends the excess wave power onto neighboring properties, speeding up the process of erosion for those sections of shore. It also stops the natural fluctuations of sands, which help create the sandy beaches that make our region a summertime destination.

EGLE’s Sanders notes that if property owners in the state of Michigan were to continue hard armoring the shoreline without restriction, “we’d eventually end up without beaches, because the nearshore areas are dependent on those sand additions.”

Smith agrees, and says that natural fluctuations in the Great Lakes will eventually move in property owners’ favor: “Eroded land during high water year will come back during lower water years as loosely consolidated sand and stone beaches.”

Of course, there are plenty of cases where property owners can neither live with erosion nor wait for the water level cycle hit a downward trend.

Cysilia Schaub, who works as part of the sales and estimating team at TruNorth Landscaping, says the majority of the jobs the business has done this year along vulnerable shoreline – including at Northport Point and Stony Point in Suttons Bay (both pictured above) – have incorporated hard armor techniques like boulders and riprap. These strategies, while extreme, have become increasingly necessary to save in-jeopardy properties.

“It’s a pretty harsh approach,” Schaub said of hard armoring. “However, on Lake Michigan, with the high wave energy that you get (along those shorelines), hard-armoring is really one of your only viable options if your property is at risk. What the rip rap does is dissipate the high wave energy that comes from Lake Michigan, so when the wave reaches the wall it is much smaller.”

“When you get into some of the smaller inland lakes or other wetland areas, you have a lot more flexibility for what you can do, and you can take a more natural approach,” she said.

But part of the challenge with taking a natural approach says Nathan Griswold, the founder and president of green roof company Inhabitect, is that that EGLE’s permitting process is not designed to favor natural shoreline projects.

Griswold is passionate about the idea that natural shorelines not only provide ecosystems for nearshore wildlife, but also sow root systems deep into the soils that help hold the shoreline together. And, that they can be every bit as stable as hard armored ones. “The shorelines that are doing the best right now are the ones that are vegetated,” said Griswold, who also offers shoreline restoration services. But when Inhabitect applies for a permit to put in new vegetation along a shoreline site, there is no predefined category in EGLE’s permitting process for bioengineering/natural shoreline strategies.

As a result, Griswold feels there isn’t much motivation for the average property owner to prioritize a more eco-friendly shoreline protection project – particularly if their matter is urgent. “I believe natural shorelines are a great solution, and I have multiple permits moving forward right now that I feel are good solutions for certain sites,” Griswold says. “But (EGLE) made me jump through way more hoops to get those permits. If I had done it the other way and chosen a hard-armor technique, those jobs would already be built.”

Griswold’s goal is to connect with The Watershed Center Grand Traverse Bay, Tip of the Mitt Watershed Council in Petoskey and other northern Michigan environmental organizations to lobby EGLE and the Army Corps of Engineers to write a more intuitive permitting process for natural shoreline projects. That type of public-private partnership, he thinks, could do a lot to move the needle and establish bioengineering as a viable, affordable and popular option for shoreline protection and restoration work.

Adds Schaub, who says TruNorth’s team also focuses on native plants, sustainable landscapes and native ecosystems as part of forward-looking solutions: “If people are not experiencing damages at this point, they should look at what they have and question if it sustainable. A lot of times people will plant turf grass to the shoreline edge, but this is actually one of the worst things for the shoreline because there is no root infrastructure. If someone is concerned about their shoreline for the future, and the water and waves are not impacting your shoreline too negatively, then, yes, I would recommend to start planting native plants that are accustomed to growing on the shoreline and in the water, to have that buffer and create a stronger infrastructure.”