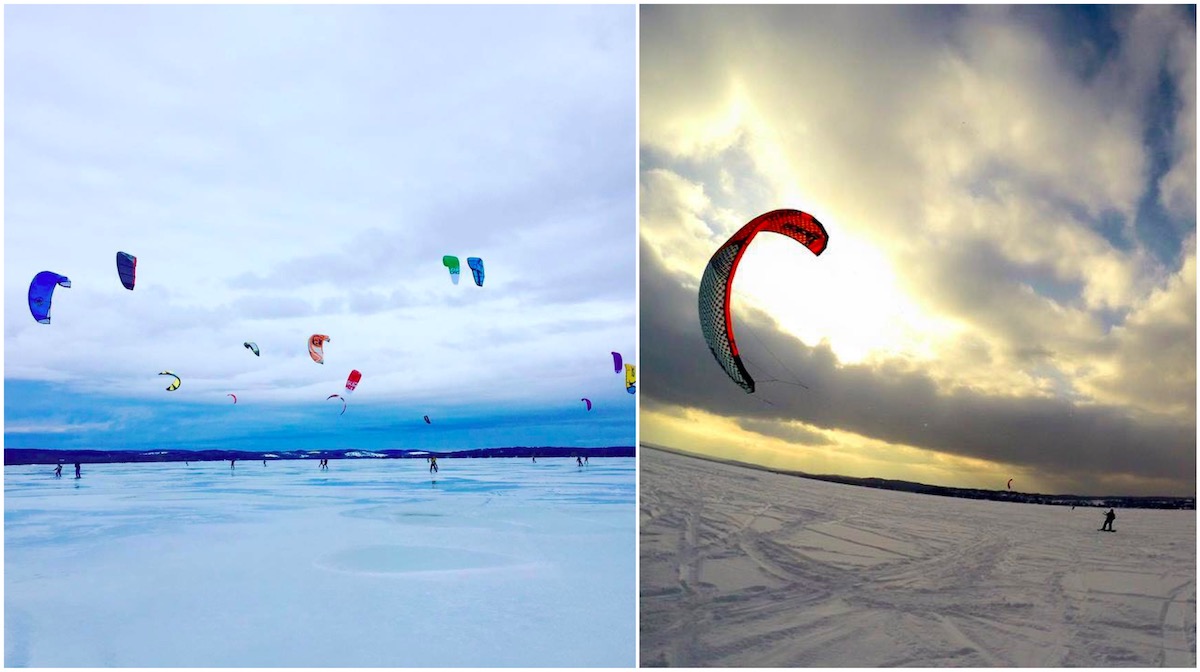 See People Fly On Lake Leelanau, The Best Spot In The Region For Snow Kiting

On any given winter weekend – but especially this one – Lake Leelanau is the place to go in northern Michigan if you want to see a person fly. That’s because Lake Leelanau is perhaps the best spot in the region for snow kiting, a sport steadily gaining a foothold among local outdoor enthusiasts. On Sat., February 20, snow kiters from throughout Michigan and three other states will converge on Lake Leelanau for the annual Midwest Snow Kite Jam, all in search of big wind and bigger air.

Think of snow kiting as the cold-weather equivalent of kiteboarding. It takes a summer sport and makes it a winter one – trading sun for snow, water for ice, and kiteboarding boards for skis or snowboards. Snow kiters can aim for speed, height, or length of time in the air, depending on their preference or the event at hand. The Midwest Snow Kite Jam will offer kiters opportunities for all three, with a trio of competitive events – plus a clinic for newbies – all on the tentative schedule for the weekend of the 20th.

The Midwest Snow Kite Jam has been running each winter since the early 2010s, with Lake Leelanau serving repeatedly as the home base venue. What is it about this particular lake that has snow kiters driving from Ohio, Indiana, Illinois, and throughout Michigan to spend a stray February weekend in Leelanau County? According to Laythen Young, a Portage-based physical therapist who is one of the event’s organizations, Lake Leelanau simply has some of the most snow-kite-friendly geography in the Midwest.

“We like Lake Leelanau,” Young says. “First of all, it has good proximity to Traverse City. Most of our [out-of-town] participants are staying in Traverse City, so it's 20 minutes out and it’s easy to get there. Second, it’s a long lake. When the wind blows out of the southwest or the northwest, which are the predominant two directions when we don’t have a storm coming in, it’s ideal [for snow kiting] because the wind will blow along the whole length of the lake and create perfect conditions.”

Provided that the wind blows on Saturday, the Midwest Snow Kite Jam will consist of three main competitive events. First, around 10am, snow kiters will race each other around a makeshift course on the ice to see who is fastest. Second, around noon, there will be a “freestyle competition,” with a ramp and a rail for snow kiters to slide and ride. Third, around 1pm, competitors will take part in a high jump competition, which Young describes as the snow kiting equivalent of pole vaulting. All times are tentative, depending on wind and weather conditions.

Strong winds, cold weather to keep the ice stable, and decent snow cover (for padding, as snow kiters descend from the air and land on the ice) are the types of conditions that every person involved in the Snow Kite Jam is hoping to see this weekend. Even if the weather doesn’t cooperate, though – something Young says is always a worry when it comes to scheduling a specific date for a snow kite gathering – there will still be =something= going on at Lake Leelanau. Snow kiting, it turns out, isn’t just a sport, but a community.

“If there’s no wind, maybe somebody will bring a snowmobile out and tow us around on the snow,” Young says. “I think we have a participant who works at the local bike shop, so we could potentially get some fat bike rentals and people can fat bike out on ice. If there’s not too much snow and there’s no wind…well, we’re creative, we’ll play bag toss or something. We love to get together anyway. We've been doing this a few years now, so everybody knows each other.”

Young says Snow Kite Jam regulars keep in touch throughout the year via group messaging apps, often coordinating with one another to plot snow kiting activities (in the winter) or kiteboarding adventures (in the summer).

For Kristi Avery, a local financial advisor and passionate snow kiter, the sense of community is at the core of what makes the sport special. Avery describes herself and her husband as “outdoors adventure enthusiasts,” regularly partaking in downhill skiing, mountain biking, fat biking, cross country skiing, ice fishing, and more. When the pair started kiteboarding six years ago, in the summer months, trying out snow kiting was the natural next step. In the years since, Avery says the local kiteboarding contingent has grown into “a pretty tight-knit community,” which has helped keep the sport fun in the winter and summer months alike.

“Once you get in and prove that you went through the paces to learn how to be a safe snow kiter around your peers, everybody’s pretty darn welcoming,” Avery says. “Our normal crew is probably 10-15 people, but then there’s a bigger community too. There’s a Traverse City crew; there’s a Leland crew; there’s a GroupMe out there that’s got maybe 150 people on it, and that’s kind of from all over Michigan. We all use the same lakes, and we all know each other.”

If you’re looking to get involved in this thriving community, this weekend might be your shot. The Midwest Snow Kite Jam not only welcomes spectators, but will host a clinic around 2pm on Saturday where participants can try out a trainer kite and learn the basics of snow kite equipment and safety procedures. There’s also a raffle at the Snow Kite Jam this year, with a brand-new snow kite as the grand prize.

If you do decide to give snow kiting a try, though, know this much: it’s absolutely an athletic endeavor.

“It’s a slightly common misconception that you need a lot of upper body strength [for snow kiting],” Avery says. “While that's really important, I think core and leg strength are a more dominant need to learn how to kite, on water or on snow. The harness takes the bulk of the power from the kite, and that's wrapped around your waist. The kite connects directly to that harness, and you steer with the bar that's also connected to the harness. So that’s where all of the pressure is taken, and you want to make sure that you are at least somewhat athletic to give it a go.”

Interested in attending this year’s Midwest Snow Kite Jam? Sign-up details for the competitive events or the clinic can be found here, and spectators are encouraged to park at Bingham Body & Towing, located at 8397 E Bingham Rd., Traverse City. Keep an eye on the event Facebook page  for the latest updates.

Editors Note: The Midwest Snow Kite Jam on Lake Leelanau has been moved to 10am Sunday Feb. 21 — and its location to the west side of the lake — with hopes of better wind. Details from the organizers here:

"We changed the day of the event from Saturday to Sunday. There isn’t going to be any wind on Saturday. We need wind to fly our kites. There is a decent chance for wind on Sunday. We also need the wind coming from the right direction so our kites can catch the wind. Hence the location change to the West side of Lake Leelanau. Spectators can park along Skyline Drive (the access road to the west DNR boat launch). We will start the race at 10am. And if you’re a praying person, please pray for good wind! Here is a link to the location: Lake Leelanau DNR Boat Ramp (West)"

UPDATE from organizers as of Feb. 21 at 10am: Change of plans for Sunday kite events. All events will be at Bingham boat launch and starting when the wind picks up. There was too much snow at west DNR launch with minimal parking. Overflow parking at Bingham Towing & Body. Please do not park on the main roads.