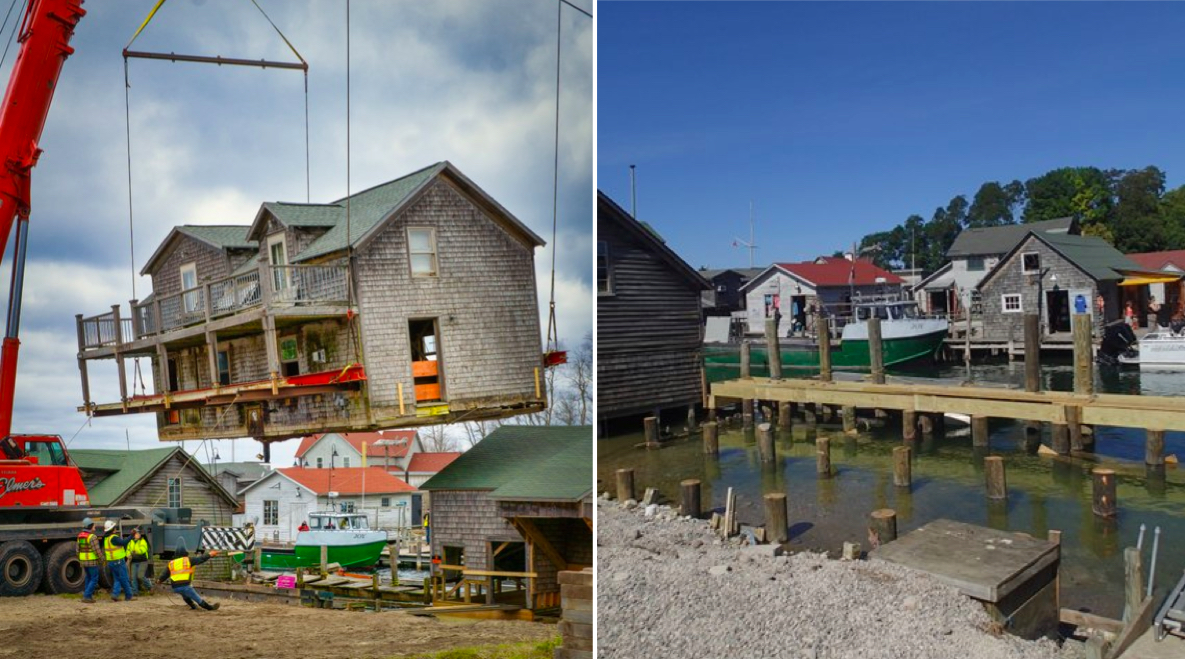 First thing Wednesday morning Sept. 29, Fishtown Preservation Society welcomes The Otherside shanty back to its home on the Leland River. It was lifted out of danger from the high water of Lake Michigan on December 3, 2020, after sustaining extensive damage when the Great Lakes water levels were at a record-breaking levels.

Amanda Holmes, executive director of Fishtown Preservation shares, “We’d hoped to do it last week, but the weather prevented it and we’re taking advantage of the weather and availability of the contractors this week.” The project is being overseen by Biggs Construction, Kasson Contracting and Team Elmer’s.

The shanty will be lifted by crane as early as 9am. Once the lift begins it takes only four to eight minutes. Any increase in winds, however, can delay the process. “We’ll send out updates via social media,” says Holmes.

Visitors are welcome to watch from the north side of the Leland River. The Cove restaurant also has a webcam overlooking Fishtown and the worksite. Updates will be posted on Fishtown Preservation’s Facebook page and Instagram.

The Otherside got its name when it was used for storage as part the Carlson’s Fisheries operations on the north side of the river. Whenever anyone needed something from storage, they’d say they had to get it from “The Otherside” of the river.

In 2000, the Carlson family decided to convert the shanty into a unique vacation rental and hired architect David T. Hanawalt to create the plans. At the core of the shanty are parts of an old Fishtown shanty that once served as a hub of shore work for commercial fishermen beginning in 1904. Fishtown Preservation acquired The Otherside in early 2016, when the Carlson family decided to sell it. FPS continued to offer it as a weekly vacation rental through the end of the 2019 season. But beginning in 2020 it flooded numerous times. Water wicked up the walls into the insulation, destroying the ash flooring, and damaging the utilities.

The Otherside’s new foundation piles were driven this past July, and will give the shanty a much sturdier and higher perch. The hope is that the shanty can be rented out again for the 2022 summer.

Fishtown Preservation began its efforts to save the shanties from high water early 2020, with the Village Cheese Shanty.

While the water levels have receded, the costs from the high water damage and supply shortages have risen. The fundraising goal for the Campaign for Fishtown is now at $5.29 million. FPS still needs to raise $856,500 to complete all of the site projects. Carlson’s Fishery is also slated to be lifted later in the year.

“Half of the projects now facing us were not on our radar before early 2019,” says Holmes. “The water issues have made us focus on not just the Fishtown of next summer and five years from now, but the Fishtown of fifty years from now. All of the piling and foundation work is just one part of the difficult but hard-to-see work of saving Fishtown. The work we are doing now will ensure that Fishtown will be here forever.”

Holmes adds, “It is taking a unity of effort to save Fishtown from the effects of high water. We need everyone that loves Fishtown to help—that they care for the place they love. Find more about the work of Fishtown Preservation here.