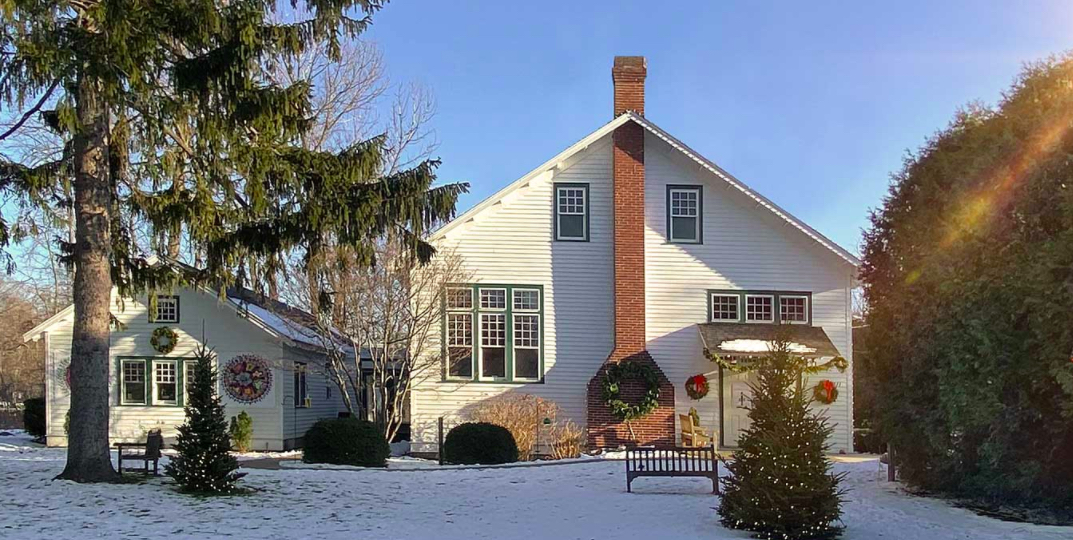 This week Leland’s Old Art Building (OAB) kicks off its 100th-year celebration, and — notes its executive director Becky Ross — another major milestone: “A year ago [yesterday], January 6 we celebrated the purchase of the building.”

Unbeknownst to Ross and the OAB crew, mayhem was unfolding at U.S. Capitol while they were prepping the grounds “for a big afternoon photo op and reveal of the sign that said, ‘We Did It. We Own It.’ At 1:30, we had people texting, ‘is it called off?’ and ‘you can’t be celebrating right now.’ I thought, ‘we can’t just put a megaphone outside and say, ‘don’t come.’’”

And come they did. “That day when people did show up, they had a bag of hurt on their back but said, ‘Oh my gosh, I’m so glad to be here, and this place always make me feel this way,’ Ross tells the Leelanau Ticker. “It’s kind of amazing. With all of the terrible stuff happening in the world we still find a way to have peace and community here, in this little place.”

The connection the OAB seems to foster has some pretty magical roots. As one of the oldest community centers in the state, the space is still doing what it’s always done: providing locals with arts, entertainment, and endless opportunities to gather whether it be an art workshop, craft class, concert, or friend’s wedding. The OAB also typically hosts at least 450 artists, lecturers and musicians yearly. “I know people who have gotten married here, had birthday parties and college graduations here. I think that ties into that community feeling,” says Abby Chatfield, OAB administrative assistant.

But none of it would exist if it weren’t for a woman named Allie Mae Best.

In the late 1890s, when she met a magic man by the name of Walter T. Best, Allie Mae was a sweet, small-town girl living in St. Charles, Illinois. Allie Mae was smitten. Walter was an up-and-comer on the touring magician circuit, and the first magician to be signed to a Chautauqua show.

Chautauqua was a social-cultural movement that spread across the country in the late 19th and early 20th centuries by educators, explorers, preachers, scientists, artists, and musicians. Walter’s magic act wasn’t typical Chautauqua fare, but his charisma and talent earned him a spot on the touring circuit. “There would have been other types of entertainment, but not a magic show. So, he was the first to achieve that,” says Mary Stewart, a former OAB board member.

Walter and Allie married in 1899. “It was a big deal. It was kind of like having Jack Benny marry a local girl,” Stewart says. She doesn’t exaggerate. By 1906, Walter T. Best — also known by his stage name, Maro Prince of Magic — was the highest-earning magician in the U.S. and his fame was on par with Houdini’s. Among his wild feats: an art séance act, where he would rapidly execute crayon sketches of impressionistic scenes. As his fame grew, Walter and Allie built a home on the north shore of Lake Leelanau — named, appropriately, Maronook — to stay between tours.

But the good times would not last. In 1908, while touring the East Coast, Walter caught typhoid, which he died from in three weeks’ time. Allie was home in Leland when he fell ill and was heartbroken. In 1909, she began a women’s club, lovingly named after her husband: The Walter T. Best Women’s Club. “These kinds of women’s clubs were all over the country,” says OAB Board President Dan Lisuk. “They gave women an opportunity to take an active role in their communities.”

The founding members of the Walter T. Best Women’s Club were college-educated women as well as farmers’ wives, united by their hunger for knowledge, arts, and culture. Afternoon meetings included reciting poetry, playing instruments, or singing. Discussion often revolved around how the club would fundraise for a space where they could bring outside culture to the Leland community.

What we now know as the Old Art Building was completed in 1922 and for 17 years hosted its own Chatauqua events. “There was a lot of folk art, folk music, folklore being spoken,” says Ross. “And people who lived here got to experience it, some for the first time.”

Those happy days came to a halt when the Great Depression hit, and in 1939, Allie Mae donated the building to Michigan State University, launching a 50-year pilgrimage of MSU art students and professors to its Leland summer campus. In 1989 it, to went dormant.

The building became a hot topic again when it was being considered for development a few years later. “There were rumors that it was going to be sold,” says Sally Biggs, who in 1994 teamed up with a woman named Amy Chatfield; a local couple, Bobbie and Ed Collins; and a few others founded a nonprofit called the Leelanau Cultural Community Center to save the building. Several LCCC members struck a deal with MSU to rent the building at the hefty price of $1 every 10 years. A board was formed, staff was hired, and arts and educational programming returned to the Old Art Building under the care of the LCCC.

Though the rent was cheap, the love, care, and raised funds that were poured into the Old Art Building drove desire for the LCCC to purchase it. MSU was reluctant but hope and a little perseverance go a long way, says Ross.

“Our last big fundraiser was in 2020. With what we raised, we were able to buy the building,” Ross says, adding “I so appreciate MSU working with us on this deal, and feel it was a win-win-win: MSU won, LCCC won, and the biggest winner is the Leelanau community.”

And there are only more memories to be made in this iconic space: To celebrate 100 years, the OAB will be adding a little “extra” to all events for 2022. “We don’t want people to get sick of us talking about it,” Ross says. “100 years!”

A version of this story, by writer Brighid Driscoll, appears in this week’s edition of our sister publication Northern Express. Additional reporting by Emily Tyra. Need more Maro the magician? Find him, and other fascinating figures of Leelanau County in Leelanau Historical Society Museum’s virtual exhibits, here.