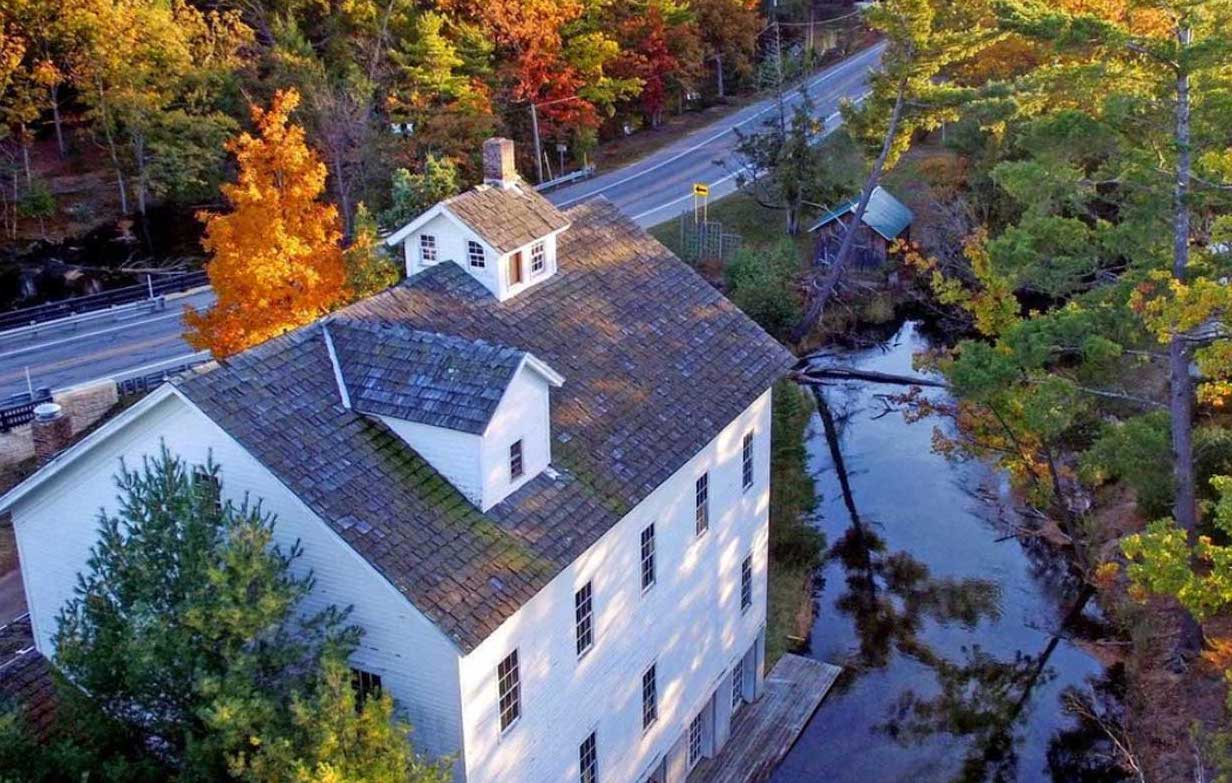 After months of contentious debate in and around Glen Arbor, local voters will settle the score tomorrow (Tuesday) when they decide what happens next with Glen Arbor’s historic grist mill and the neighboring parcel known as “the Brammer property.” At stake is a zoning classification which could affect the future usage of the two parcels – and, in the eyes of some, the future character of Glen Arbor itself.

On one side of the debate is Turner Booth, who serves as steward for the mill and who has been working to rehabilitate and revitalize the historic building for several years. Booth wants to reopen the mill as a museum and a community gathering space, but also has other visions for the property, including “a café, a health and wellness venue, lodging in existing structures, and parking to accommodate visitors.”

The Brammer property includes several structures – such as an ice house and a stable – that were historically used as part of mill operations. Booth wants to “reunite” the two parcels, something he says would allow him more flexibility to use the structures and land on the Brammer property as part of the new museum and gathering space – thus making it more financially worthwhile to preserve those additional historic structures.

On February 16, the Glen Arbor Township Board of Commissioners voted to approve Booth’s zoning request. But that wasn’t the end of the story.

On the other side of debate is a group of local residents who formed a 501(c)(4) social welfare organization called Love Old Glen Arbor (LOGA). That group – which carries a mission “to preserve the unique character of Glen Arbor while celebrating its pristine rivers, lakes, dunes, forests, and wildlife” – has pushed back against Booth’s plans. Specifically, LOGA’s members have expressed their concern that Booth’s vision for the mill and Brammer parcels – especially the café, parking, and lodging components – would bring an overly commercialized atmosphere to a residential section of Glen Arbor. Such encroachment on residential neighborhoods, they say, violates the township’s master plan.

LOGA also argues that township records don’t offer adequate proof that the mill property was ever zoned recreational. Instead, the group maintains that the mill and Brammer properties are both actually zoned residential – and therefore, that the rationale both Booth and the township board used to justify rezoning the Brammer property (that the zoning for the two properties should match) was without merit.

In the wake of the February 16 decision, LOGA successfully petitioned to have the Brammer rezoning put to a public referendum vote. The matter will be on the ballot tomorrow (August 3) for Glen Arbor voters to decide. The ballot language is as follows:

A rezoning request was approved by the Glen Arbor Township Board on February 16, 2021, to amend the Official zoning Map of Glen Arbor Township and which rezoned 1.07 acres of property located on M-22 North of Crystal View Road owned by Charles and Emily Booth and formerly known as the Brammer Property, Section 23 T29N, R14W, tax number is 45-006-123-010-00, from Residential 2 to Recreational. Shall this rezoning be approved?

New controversies have continued to emerge since LOGA’s petition to have the matter put on the ballot. For instance, Paul Holtrop, a member of LOGA, has claimed on Facebook that the “ballot language is wrong,” citing a certified boundary survey prepared last summer and submitted by Booth to the Michigan Department of Environment, Great Lakes, and Energy (EGLE), which indicated that the Brammer property is actually 3.12 acres in size rather than the 1.07 acres specified on the ballot.

“I am not an election lawyer, but this seems like a big problem,” Holtrop wrote. “Two individuals I know have opined that they don't think the Brammer and mill properties are big enough for the owner to make too big of a project there. Would the fact that the Brammer property is two acres – 200 percent – bigger than the ballot language claims change their mind?”

When asked about the discrepancy, Glen Arbor Township Supervisor Tom Laureto tells the Leelanau Ticker that township attorney Richard Figura prepared the language and pulled acreage numbers from the Leelanau County geographic information system (GIS). The GIS does list the Brammer property (5454 W Harbor Highway, Maple City) at 1.07 acres, as does tax documentation on file with Leelanau County regarding the property (parcel number 006-123-010-00).

“We do not know the source of this boundary survey,” Laureto said of the document cited by Holtrop.

The Leelanau Ticker obtained a copy of the certified land survey in question, which was prepared by Gosling Czubak and which does indeed indicate that the 006-123-010-00 parcel is 3.12 acres in size. The Gosling Czubak boundary survey also marks the neighboring mill property (parcel number 006-123-019-10) as being larger than what is reflected in the county GIS – 2.07 acres, versus 0.92 acres. The reason for these discrepancies is unclear.

Both sides are glad the referendum vote has finally arrived. Booth has been holding weekly meet-and-greets at the Glen Arbor Farmers Market and says he is feeling “confident that the majority of property owners in Glen Arbor want to see my plans for the mill come to fruition.” Most of his concern over the vote, in fact, is not about public opinion, but about voter turnout, which he says tends to be “notoriously light” for special elections such as this one. “We need every voter in Glen Arbor who wants a new place to take their family and friends to get out and vote yes,” Booth adds.

“The current plan is to open the mill to the public as a one-of-a-kind museum, café, and community space,” he says. “The finished product would be tasteful, discreet, and open year-round.  If we lose the vote, it will impact our ability to be open to the public in a meaningful way – and in turn impact the mill’s ability to be economically self-sustaining without reevaluating the concept. There are other concepts that could work at the mill, but they aren’t as accessible, fun, or community driven. I’d prefer to stick with the current plan.”

For LOGA, the matter ultimately comes down to one thing: zoning. While much of Booth’s campaign ahead of the vote has centered around the restoration of the mill itself (“Save the Mill” has been the motto of those advocating for a “yes” vote in Tuesday’s election), the LOGA group maintains that it has nothing against the restoration of the mill and is merely trying to hold the township to its own master plan.

“Zoning laws matter, even in Glen Arbor,” LOGA said in a statement to the Leelanau Ticker. “With around two million annual visitors to the [Sleeping Bear Dunes] National Lakeshore, protection of zoning districts is more important than ever. In 2021 the Glen Arbor Township Board has attempted to open business zones to residential use and vice versa. Tuesday’s referendum seeks to protect a residential district from commercial sprawl… A ‘no’ vote ensures the protection of our zoning laws and in this particular situation, protects a residential zoning district.”