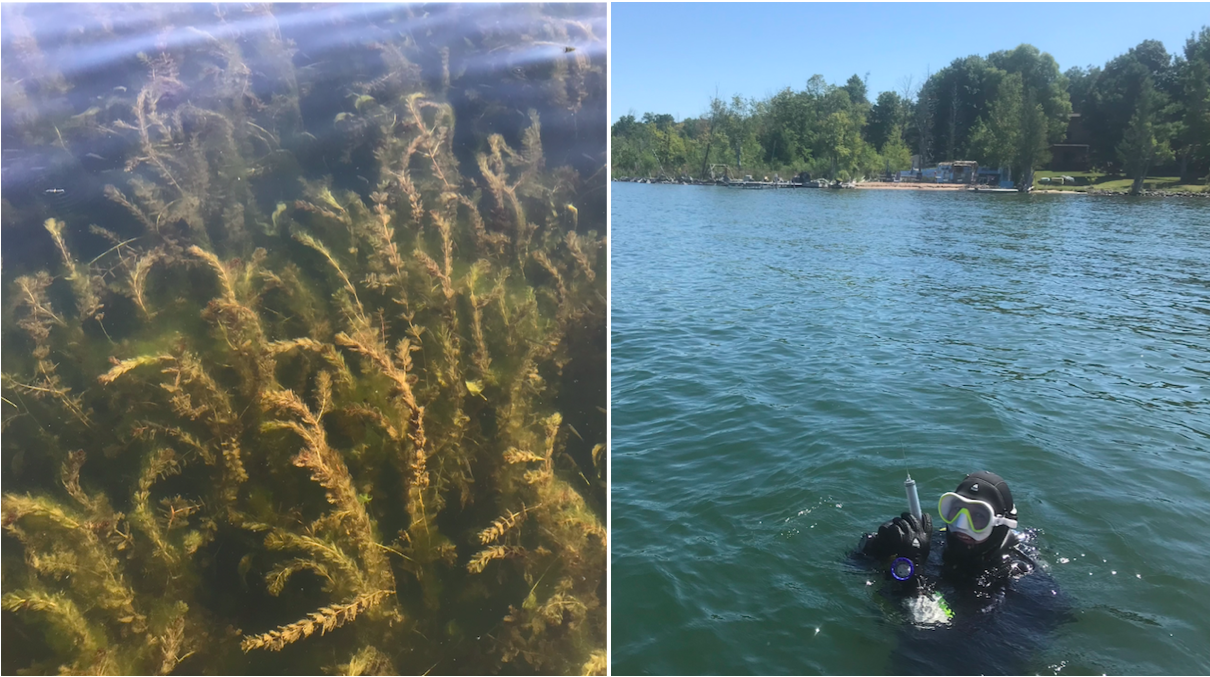 How it Started...How It's Going: An Invasive Eurasian Watermilfoil Update From Lake Leelanau

A team of divers and biologists from the Lake Leelanau Lake Association (LLLA) and the Grand Traverse Band of Ottawa & Chippewa Indians (GTB) have been working tirelessly this summer controlling the potentially devastating invasive aquatic plant Eurasian watermilfoil (EWM) first discovered in 2020 in Lake Leelanau.

Guess what? It's working. They are making some pretty encouraging progress, shares Annalise Povolo, a Lake Leelanau native and new director of administration and programs for LLLA, who has been out in the field — or more accurately, the lake — deploying burlap barriers and monitoring for any new infestations:

Leelanau Ticker: It’s been an intense summer for you. Are you still diving?
Povolo: We plan to work through September…or until the water gets too cold. With the school year here, we lost a couple of our contracted divers, Catherine Dunn who is a high school teacher in DC and Austin O’Connor, who goes to a local high school. After learning about the threat of EWM last year, they both got SCUBA certified so they could help us out this summer! We are seeking new helpers this fall…any certified and experienced SCUBA diver who might be interested in volunteering, please contact me.

Leelanau Ticker: Where are the biggest infestations of invasive EWM on Lake Leelanau?
Povolo: At the bay where Otto Road comes out and at the two land outcrops south of Otto Road. That's where we're concentrating most of our effort this summer.

Leelanau Ticker: Who is out there fighting the weed?
Povolo: We have a crew of about 10 that includes me, EWM Project Manager Ron Reimink, and LLLA Biologist Brian Price (who was the first to discover EWM on the lake in 2020). Catherine and Austin were underwater almost every day the weather permitted, and they handled the difficulty of this work like champions. There are also biologists from the Tribe, who help us out when we deploy the burlap barriers. And we are partnering with Grand Valley State University (GVSU) and have a grad student whose reseach for her thesis is studying the efficacy of these barriers.

Leelanau Ticker: And the barriers are there to choke out EWM?
Povolo: Yes. There are now 10 areas where we have placed barriers since 2020…most are on the southeast side of South Lake Leelanau plus a couple of small ones on the west side of the lake. There is one barrier just south of The Narrows.

Leelanau Ticker: Nothing in North Lake Leelanau, so far?
Povolo: Correct, but just because North is deeper does not mean that there are not areas in which it could take over. It probably was just introduced in the south lake first. North of The Narrows we have seen a few clusters, and we have controlled them.

Leelanau Ticker: How large are these barriers?
Povolo: The largest we’ve set is 40 feet wide by 500 feet long…and that was joined with another to create a continuous 1,000 feet of barrier on the lake bottom. We are fortunate that Brian [Price] is out every day with us. Because of his connection to the commercial fishing industry, he is used to deploying very large objects off from a boat! [During his 15 years as a fisherman, he worked out of Leland, Munising on Lake Superior, and then with crews for the Grand Traverse Band in Omena.] (Check out a video showing how these large burlap blankets are deployed.)

Leelanau Ticker: What discoveries can you share from this summer?
Povolo: I can say from personal observation, there is a really exciting result: On the barriers placed previous to this summer, we are starting to see native plants growing up through the burlap. Just the native plants, not EWM. The reason we believe this is happening is that EWM has not yet flowered in Lake Leelanau. LLLA and GTB were able to hop on this before the problem reached the levels they are seeing at Lake Minnetonka and Houghton Lake.

Leelanau Ticker: What’s happening on those lakes?
Povolo: They let it slide for too long…so now there is nothing to do except use a bunch of chemicals or use a reaper which cuts it back so kids can swim for a couple of weeks of the summer. Those lakes are out of control because those lakes have flowering plants. EWM was able to grow all the way up to the surface, flower and produce seeds…just like any other flower. And those settle down to the lake bottom and lie dormant for years. That’s the point of no return, when you have a seed bank.

Leelanau Ticker: Wow. Sounds like a lake horror story.
Povolo: Yes, and it’s really a testament to the lake association and the way they handled it when they found out, and partnering with the Tribe right away. A lot of lakes have a sit-and-wait mentality, because they do not have the resources, nor the expertise, and it gets to the point their lake is unusable. We are incredibly grateful for this relationship with the Tribe. As a cooperative endeavor it allows us to be authorized by the DNR to do the work. And they have taught us a lot.

Leelanau Ticker: Just making sure…Lake Leelanau couldn’t have a dormant EWM seed or two lurking in wait?
Povolo: No, because thankfully we know it never made it to the surface and flowered.

Leelanau Ticker: Explain how native plants CAN come through the barrier?
Povolo: The barrier does make a barren expanse temporarily, but for common native plants — like water celery, or a native milfoil that we actually want in the lake — this is their native home. As the burlap is breaking down a bit, they are reclaiming their territory. There are a lot of really discouraging days when you do invasive species work…but seeing this was a really good day.

Leelanau Ticker: Any new infestations you know about?
Povolo: From aerial drone surveys we know there are few others we would like to tackle. We can’t do that until next year when we put them into the work plan that is then approved by the DNR.

Leelanau Ticker: How is the EWM fight funded?
Povolo: A major portion of the costs of the LLLA program for the prevention, monitoring and control of aquatic invasive species is currently being met by a generous grant from Jennie and Darren Keller. The Keller family has kindly offered to continue their support for this work for two more years, at which time Friends of Lake Leelanau Foundation, an independent nonprofit, anticipates it will have reached its $6 million fundraising goal. Friends expects a $6 million fund will generate approximately $250,000 in income a year — an amount which should be sufficient to cover a substantial portion of the costs of controlling invasive aquatic species in Lake Leelanau for the foreseeable future. Early supporters of Friends are matching additional contributions dollar-for-dollar up to $2.5 million.

Leelanau Ticker: Will the partnership with the Tribe continue?
Povolo: As long as we continue to have an EWM problem we will continue to be partners. One part of the solution is prevention, like installing boat cleaning stations.  Right now we have one under construction south of The Narrows, jointly paid for by the Tribe and the LLLA. There are others in the works.

Leelanau Ticker: Has it become cool to wash your boat?
Povolo: ALL the cool kids wash their boats…[laughs]. It's the number one way to prevent invasive species from spreading. Curly leaf pond weed came in at The Narrows this summer and we were on it right away…it’s just as dangerous as EWM.

Leelanau Ticker: What’s the "how it started/how it's going" story people can tell on their boats and decks this Labor Day weekend?
Povolo: In 2020 we had an estimated 8 to 10 acres of dense infestation of EWM. Since we started putting down the burlap barriers with the Tribe, we estimate we’ve knocked this down to less than one acre. We will have a better estimate once our fall drone survey is complete.