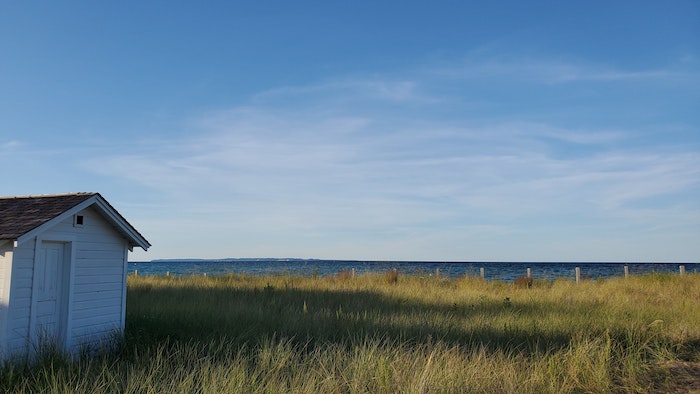 The Lost Villages of Leelanau County

It might be a handful of deserted buildings. An idyllic but desolate barn you drive by every day. Or even a go-to spot to walk the Lake Michigan beach. There are some 3,800 ghost towns in the United States, according to a recent article in the New York Times, and of course, Leelanau County is home to its own handful of these lost villages. Some simply vanished, others became part of the National Lakeshore. And Emma Keaton, the newly hired archivist at the Leelanau Historical Society Museum made it one of her first pet projects to shine a light on these once lively, prosperous places.

Kim Kelderhouse, who was named the executive director at the museum this spring, shares that Keaton is “our summer 2020 intern-turned-employee. She did Museum Studies at MSU and we are lucky to have her.” She adds that while cataloging and responding to research requests, Keaton encountered these places and wanted to share them in a Ghost Towns Series on Facebook.”

Kelderhouse says though many of these abandoned Leelanau landmarks are referred to as ghost towns, “it’s important to note these places could still have inhabitants and structures, and the reason places become ghost towns is not always because they naturally die out.”

For example, the descendants of the pioneer farmers of Port Oneida would not have left those homesteads behind, if it were not for the creation of the Sleeping Bear Dunes National Lakeshore fifty years ago this October.

Here the Leelanau Ticker shares a small glimpse into these fascinating villages, noting that many historic details came from 100 Years in Leelanau, authored by Edmund M. Littell.

Good Harbor
It’s the name of the bay, and a popular swimming and sunset spot for locals, but not many realize the spot where they casually throw down their beach towel was once a bustling shoreside town by the same name.

“There are some foundations left from the little community that was abandoned, if you know where to look,” says Kelderhouse, “but otherwise there’s very little evidence of the commerce that happened in Good Harbor.”

Good Harbor was born in 1863, with the arrival of H. D. Pheatt, who built a dock and got his start in lumber. His sawmill and dock eventually belonged to the Schomberg family, who brought about the peak of business and development in Good Harbor. Yet, that didn’t last: when the mill burnt down in 1906, villagers began gradually to move out, simply leaving their homes behind. The homes langished — empty — little by little until the winter of 1924, when they were disassembled for their lumber. A few standing reminders that there was once a town: St. Paul’s Lutheran Church on M-22, which still holds services today, and the former J.J. Kilwy's store on Good Harbor Trail. Kelderhouse notes it’s now privately owned, so view only from the road.

Isadore
Isadore was one of Leelanau’s early Polish communities, based around its Catholic church and parochial school. The small community was called simply “Four Corners,” but in 1890 it was named Isadore after the farmers’ patron saint. In that same year a post office was established. When traveling through Isadore today, you will find mostly open fields and abandoned buildings, but also the stately Holy Rosary Church, that the parishioners helped build, and which still celebrates its Polish heritage.

The truth behind — and national controversy surrounding — the mysterious disappearance of a nun who went missing and was later found buried in the church basement is detailed in a book by Traverse City journalist and author Mardi Link, called Isadore’s Secret.

Kelderhouse says the museum’s collection also contains a book, The Terrible Crime in Isadore Michigan, published shortly after the trial of Marya Lipczynska for the murder of the nun, Sister Janina. It’s written in Polish, and Dave Beatty of Suttons Bay is currently translating it for the Leelanau Historical Society Museum.

Founder C. C. McCarthy built a sawmill on the beach two miles west of Glen Arbor in 1857 and named the town. Later, McCarthy built a dock and used a tugboat on Glen Lake to help with the lumbering business growing in the small town. Eventually the mill and lumber business was purchased by David Henry Day — whose name still adorns the landmark white D.H. Day barn and the campground within the National Park  — a visionary leader who saw a future in tourism for the region long before others. As the lumber business started to disappear, so did the occupants of the town, and Glen Haven became more of a vacation spot than a place to actually live.

But Day and his family did live there, in quarters above the general store that still stands today. In the 1920s, he built a canning factory in Glen Haven to process cherries, raspberries, and peaches from his farm and from other growers in the area. It's said the canning business helped the community survive the Great Depression.

Now Glen Haven is within the National Lakeshore, and interpreters share the way the town thrived in its earliest days. Kerry Kelly, a volunteer with Friends of the Sleeping Bear Dunes works as a blacksmith at Glen Haven’s blacksmith shop. “We demonstrate blacksmithing techniques used in the late 1800's,” he says. “Blacksmithing was a common part of life back then — to make or repair metal parts — so a trip to the blacksmith shop brings out the sounds, smells, and activities that would have been an integral part of life,” he says.

The blacksmith shop just closed for the season, but will be back "in business" next spring.

In more recent history — until 1978, in fact — summer vacationers took dune rides that launched from Glen Haven, with owners Louis and Marion Warnes offering a breathtaking journey across the steep sand hills from a fleet of burly cars and trucks called Dunesmobiles.