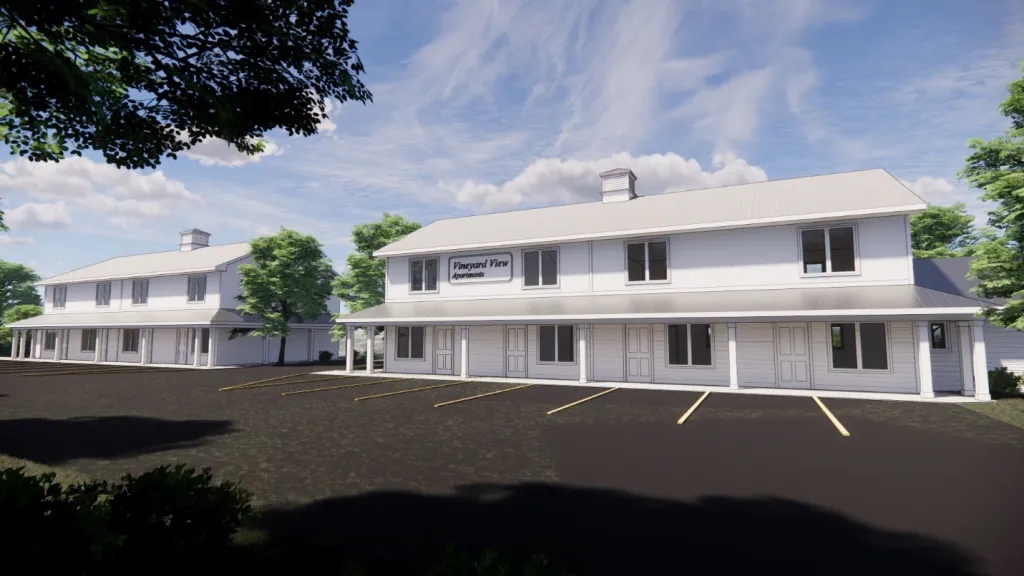 An affordable housing development in Suttons Bay, in gestation for more than a year, is facing new hurdles as it approaches the starting line.

“[The $150,000] is going to be attributed to road improvements off of M-204 [also known as E. Duck Lake Road], and 500 feet of paving for Marek Road,” Stimson explains. “Our site doesn’t have its own paved access off of Marek Road, which is currently gravel. And the Leelanau County Road Commission is mandating that we bring Marek Road up to county specifications, because we're adding density to the parcel on which our development is located. We were prepared to pave a long driveway and parking lot on our property. But in conjunction with that, [the Road Commission] is asking us to upgrade the transition from M-204 onto Marek Road, and then improve and pave 500 feet of Marek Road. That was not in the budget initially.”

Beyond that $150,000, HomeStretch has a fairly substantial “capital stack” lined up to cover the costs of the project, including $800,000 in federal and state grants – from the Federal Home Loan Bank and the Michigan State Housing Development Authority (MSHDA), respectively – as well as $612,000 in local grants and additional monies from several other sources. The good news is that most of those grants aren’t tied to specific timelines, which means HomeStretch isn’t at risk of losing funding because of delays.

The bad news is that HomeStretch is running low on options to close the funding gap. For the past year, one strategy has been to seek contributions from the general public. For example, in April, Phil Hallstedt – owner of Hallstedt Homestead Cherries in Northport and a member of the Leelanau Housing Action Committee – reached out to local businesses, churches, and community members on HomeStretch’s behalf, urging them to donate to the Vineyard View project. “We will all benefit by having year-round workforce and affordable housing for those in need that restock our grocery shelves, serve us meals, grow our food, attend our churches, and add their personalities to our community,” Hallstedt wrote.

Stimson says Leelanau County residents “have been overly generous, more so than any other county I’ve worked in.” One particularly strong area of support? Local religious organizations, with significant contributions coming from both Leelanau Christian Neighbors and Suttons Bay Congregational Church.

Of her church’s recent $5,000 pledge, Reverend Dr. Robin L. Carden of Suttons Bay Congregational says helping with the local affordable housing shortage is a crucial part of the church’s mission outreach. “We embrace the opportunity to support people looking for safe, affordable housing in Leelanau County. We value the people in our community and realize that members of the workforce are an essential part of what makes Leelanau County a treasure.”

At this point, however, Stimson feels local organizations and community members have “done their part” and are mostly “tapped out” in their ability to help fund this project or others of its ilk. “It’s HomeStretch’s responsibility to finish the last bit of funding, and we’ll make it happen no matter what,” he assures. “It’s just the timing that is disappointing, because we need units now. We don’t need them delayed by six months of build time.”

Stimson is hopeful that, once he has an engineering site plan in hand that shows the new Marek Road and M-204 improvements, he can get “a definitive bid from our excavator and then take that bid to the County Road Commission and the Suttons Bay Township board to see if they would chip in the money to make the road improvements, which is infrastructure on county-owned property.” If that doesn’t work, the “last resort” is to have an assessment placed on the property for a 10-15-year period. Stimson doesn’t like that option because it would “increase the debt load on the property and cause me to increase rents, which I don’t want to do.”

There’s another wrench in the plans, too. Two weeks ago, HomeStretch learned that the $400,000 grant it received from MSDHA is coming by way of United States Department of Housing and Urban Development (HUD) funding. That detail changes the due diligence process, adding a HUD requirement for HomeStretch to perform a Phase 1 Environmental Survey Analysis (ESA) on the parcel before the money can be released. “If we’d have known that, I would have done [the ESA] 2 to 3 months ago,” Stimson says. “Because it’s now going to take me a month and a half to get the Phase 1 finished, and then it’ll take another couple of weeks for MISHDA to approve it.”

Stimson adds that the best-case scenario for Vineyard View is a September start date for construction, which would mean “late third quarter of 2023” for occupancy.

Despite the challenges, Stimson is optimistic about the future of affordable housing projects in Leelanau County. Beyond Vineyard View, HomeStretch is already working to get similar projects off the ground in Northport and Lake Leelanau. There’s also a new MSDHA program launching in August, called the Missing Middle Housing Program, which will allocate $50 million of American Rescue Plan Act money to affordable housing projects throughout Michigan. At least $1 million of that money is coming to the 10-county northwest Lower Michigan region, with another $13 million yet to be divided among 10 state regions.

“[The Missing Middle program] will allow HomeStretch to build 8-12 units in any village or township in Leelanau County – or the surrounding counties for that matter – which will make a big difference in our availability of rental units in the next 2-3 years,” Stimson says. “So I'm asking all villages and townships to come to HomeStretch with projects in mind.”

Editor's Note: A previous version of this story incorrectly reported that the mandate from Leelanau County Road Commission requiring road improvements on Marek Road and M-204 had only 'come to light in the past six months.' Email correspondence provided to the Leelanau Ticker by Road Commission Managing Director Brendan Mullane shows that HomeStretch was first notified of these requirements in March 2021.

Mullane says of the road improvements, "adding that additional traffic volume without upgrading the road to appropriate standards would suggest that 'affordable housing' residents don’t deserve proper safety protocols and I can’t imagine a situation where that would be a fair approach." He also adds that the Road Commission "has a long standing policy that it may match up to 50 percent of road improvements costs on secondary roads at the Township’s request," meaning that the Road Commission may yet assist HomeStretch in paying for the required improvements on Marek Road and M-204.