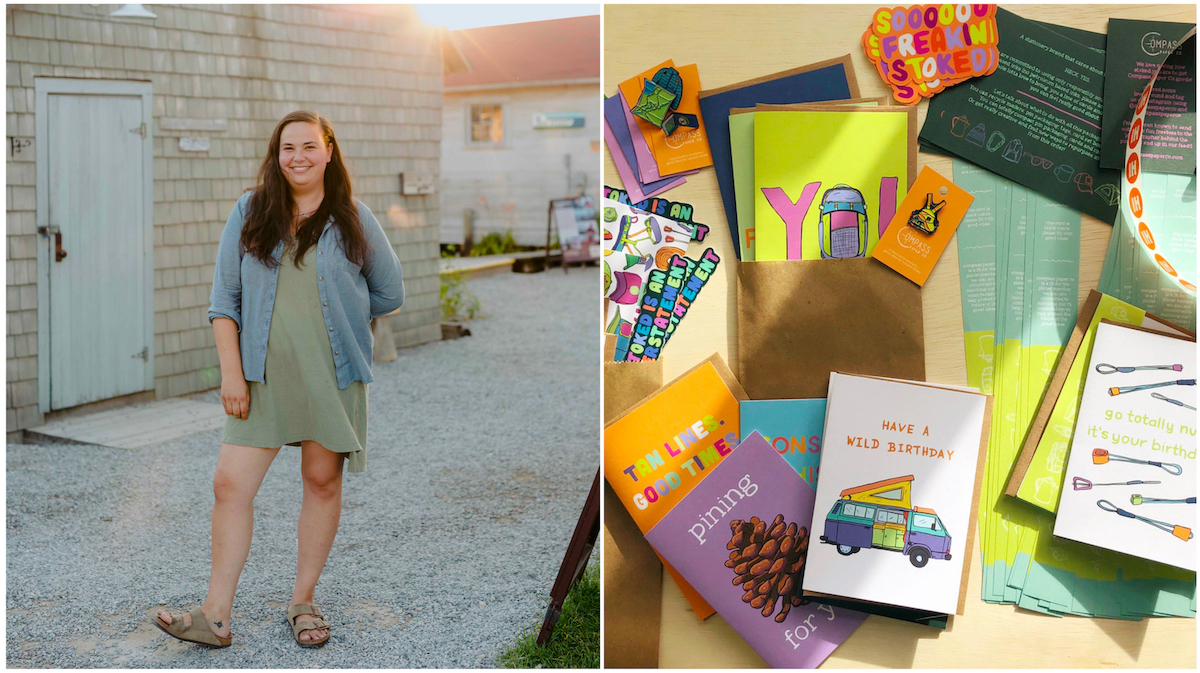 Marketplace’s broadcast portfolio is heard by more than 14 million unique listeners each week on more than 800 public radio stations nationwide. For context, that’s more than five times the audience of the top five cable TV news shows combined. And its host and senior editor Kai Ryssdal is all about context: taking the intricacies of the U.S. and global economy and giving them a personal and witty accessibility.

So, it’s fitting that the producers of the Los Angeles-based show followed three small businesses through the holidays and into 2021 to see how they’re dealing with a changing economy: Irene Kesselman of Ali Cat Toys and Books in Carrboro, North Carolina; Rue Newby from Label by Three in Phoenix; and Leelanau County’s own Annie Lang Hartman.

Readers may recall the Leelanau Ticker checking in with Lang Hartman as Fishtown’s most recent newcomer. The Leelanau County native jumped at an opportunity to open her brick and mortar location of Compass Paper Co., a paper goods store for outdoor lovers in a lean-to shanty within the historic fishing village. She opened on July 3, just weeks after signing the lease, with optimistic — but realistic — expectations of starting up amid a pandemic.

“Opening a store has been a dream of mine since I started Compass Paper Co. five years ago. Luckily, because of a thriving online and wholesale business, we already had the inventory to fill a store quickly,” Lang told the Leelanau Ticker.

It was a gamble.

As she told Marketplace associate producer Sean McHenry, “Around March 15, when things were really starting to shut down, 90 percent of our spring and summer orders were canceled. And this year, we went in having a plan of adding, you know, six or seven employees and that kind of went out the window.”

Yet, the gamble paid off: “We went up 750 percent in those sales this year, which is a really big deal.”

In addition, Compass Paper Co.’s Q4 is up 350 percent compared to last year.

Lang Hartman told McHenry, “This year what we did differently was shifting our focus from retailers to focusing on regular, everyday customers. Shifting away from putting all of our eggs in one basket was what kept us going.”

And she tells the Leelanau Ticker, “I think it all has to do with so many customers and community members recognizing the importance of shopping small this year.”

She adds, “things aren’t slowing down…I know that is not currently the case for many businesses, so beyond working incredibly hard to work through a weird year, I feel lucky for the continued support.”

She’s so busy these days, most mornings around 9am she “turns my notifications off and logs out until the next morning so I can focus on packing orders.” Still, she took a moment to tell the Leelanau Ticker about her recent turn in the national spotlight, with the final broadcast of the series featuring her small business airing this week on Marketplace.

Leelanau Ticker: How often did Marketplace check in with you for their small retailers series?
Lang Hartman: We did an interview right before Thanksgiving, one mid-December and then had an interview on December 30 that just aired January 4.

Leelanau Ticker: Do you know how the producers zoomed in on you as one of the three small retailers from across the country?
Lang Hartman: I was featured on a blog called The Dyrt years ago. That article featured an awesome handful of women owned businesses who focused on being eco-friendly and sustainable. It keeps coming up, getting recycled and reused, and that is how the producer found me, which is amazing. He has ties to Michigan, so I think that was why I was singled out. The power and draw of Michigan for those in the know does it again!

Leelanau Ticker: We spoke back in the fall about you taking the leap to open a seasonal brick and mortar in July. Did a (partial) summer open in Fishtown set you up for a successful holiday season in any sense?
Lang Hartman: I definitely think our new store in Fishtown helped add to the craziness of the holiday season. I know that at least a few times a note was left during checkout that the customer found me in Fishtown this past summer and wanted to make sure to order from us during the holidays. We are shipping out some of our [specifically] Northern Michigan themed items like our Petoskey stone pins  and Leelanau Trails tote bags all over the U.S. this season.

Leelanau Ticker: Did you notice spikes in your reach from the fact that you were on Marketplace?
Lang Hartman: The day of the interview and even a day after, our website definitely saw a boost in views. Each time we would get new followers on Instagram, new email subscribers. And I am trying to find time to sit down and answer all the “I heard you on Marketplace” emails right now.

Leelanau Ticker: Any off-the-cuff you can share about being on the show?
Lang Hartman: Each time I would talk to producer Sean McHenry for at least 20 minutes about anything and everything. The main focus was always how things are going this holiday season, but we would talk too about overall trends from the year, how my workspace is looking, issues we are running into and how we are feeling heading into 2021. I always laughed about how it was all whittled down to 1 minute, but the gist of the overall interview was always captured. And I always talked about Leelanau a little bit, especially with this last interview.

Overall, it was a fun process. Like so many other small businesses, I just put my head down and work hard through the holiday season. But with these interviews that focused on how things were going, they ended up being a really nice break and forced me to actually sit down every couple of weeks to reflect on the state of things around me.

Leelanau Ticker: Heading into winter, what’s next for your business?
Lang Hartman: The biggest thing I am focusing on is ironing out a staffing plan and finalizing everything for our store in Fishtown reopening sometime in May.
On our immediate to do list is mentally and physically preparing for Valentine's Day. We have lots of big orders for retailers going out over the next couple weeks so setting up freight pickups and organizing thousands of cards heading out the door…But looking ahead, I am excited to add more staff and to keep growing and expanding thanks to the support of all my amazing retailers and customers that got us through last year.

The Leelanau Ticker also recently checked in with three Suttons Bay retailers/restaurateurs who opened just prior to — or during — the pandemic. See their stories here.