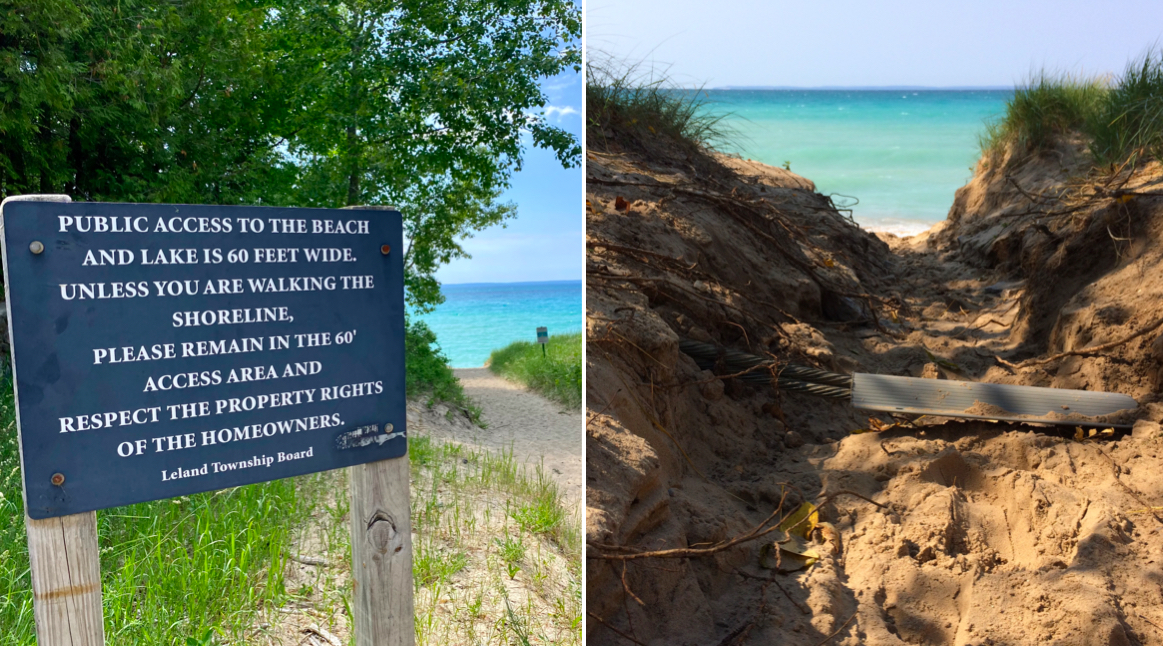 The fight’s not over: That’s the message some Leland residents are sending to the township, the Leelanau County Road Commission, and property owners who sought to restrict public access to Leland’s South Beach.

A legal dispute over the 60-foot-wide swath of Lake Michigan frontage seemingly came to a close in August with a settlement agreement, but some locals say it puts the future of the beach in jeopardy. Those citizens have launched a GoFundMe page to funds to mount a legal challenge.

Since at least 2019, South Beach – also known as Reynolds Beach or Christmas Tree Beach – has been the lightning rod in a public debate over property rights. The beach at the end of a public road has been a popular point of public access to Lake Michigan for generations. In recent years, though, the property owners whose land abuts the beach on either side — identified in legal documents as the Abigail M. Janko Share Trust and the Preston P. Joyes Jr. Trust — argued that the beach is actually private land. They filed a lawsuit against the township and the road commission over the matter.

The plaintiffs contended that, while Reynolds Street is a public road, the road end – and therefore, the path that leads to the beach and the beach itself – was actually an internal road within a platted development. If that were the case, then the Janko and Joyes families would have held private property rights to the beach.

To argue the case, the township and the road commission had to point out that where Reynolds Street ends today used to be an intersection with a now-vacated road called Water Street. But that argument introduced a new wrinkle: That the pathway leading down to Lake Michigan, as well as the entirety of Reynolds Beach itself, were public road. Such an argument would have negated the plaintiffs’ private property claims, but also would have meant that the beach area could only be used as a roadway – solely for ingress and egress to and from the water – rather than as a recreational beach.

In other words, to force that argument, the township and the road commission may have had to disallow typical beach activities such as picnicking or sunbathing on Reynolds Beach.

Speaking to the Leelanau Ticker this summer, Brendan Mullane – managing director for the Leelanau County Road Commission – suggested that a settlement with the Janko and Joyes trusts was in the best interest of all parties. “There is risk if [the road commission and the township] have to fight and prove that [South Beach] is a road,” he said at the time. “If it really is a highway or a road commission right-of-way, then it can only be used for transportation – which means walking down to the water, and that’s it.”

The settlement, which the road commission and the township approved in August, preserves South Beach as a public and recreational park. It also precludes any current or future members of the Janko or Joyes families from ever claiming title to the beach or the road.

But now, some residents are arguing that the settlement came at a significant cost to the general public. Late last month, Leland resident Char Lombardo launched a GoFundMe campaign titled “Save Our Lake Michigan Beach and Access.” The settlement, Lombardo writes, “cedes township and road commission authority” over several crucial aspects of beach maintenance and care – thus putting the existence of the beach in jeopardy.

“The number one concern is that the private individuals on either side of that beach access now have authority over our governing bodies to put dredging spoils on the beach,” Lombardo explains. “And [the private property owners] have made it clear through their actions over the last couple of years that they don’t support [maintaining the beach] at all. The beach is continuing to erode...and the settlement that’s in place, despite community outrage, is now through perpetuity.”

According to Lombardo, South Beach has not been “nourished by dredging sand” – a common beach maintenance procedure that replaces sand and sediment lost through erosion – since 2019. Lombardo and her fellow organizers worry that the Joyes and Janko families now have some purview over dredging.

So far, the GoFundMe campaign has raised $9,295 of its $15,000 goal, which is to cover the cost of seeking “legal expertise to review the settlement agreement.” Were an attorney to determine “that parts of the agreement are legally unenforceable, we could use any remaining funds and/or raise more funds to challenge this agreement in court on behalf of the public.”

Mullane says the township — not the road commission — will ultimately decide “how or when” to protect South Beach from erosion. However, he also notes that “section 4.k of the special provisions of the [settlement]” doesn’t entirely give the Janko and Joyes families veto power over erosion mitigation. Specifically, while section 4.k states that “In no event shall [South Beach] be used for depositing dredging spoils without all parties herein consenting to same in writing,” it also states that “Reasonable beach sanding as defined in Part 301, Michigan Natural Resources and Environmental Protection Act is not prohibited by this paragraph.”

Leland Township Supervisor Susan Och confirms that the township is still permitted to “put sand in the three-to-eight-foot contour offshore, where the water is 3-8 feet deep.” With that approach, the sand makes its way out of the water and back onto the beach by way of waves and tidal patterns.

Och says she is personally in favor of dredging – not least because there is a buried Consumers Energy line on the pathway to South Beach that keeps surfacing (pictured above) because of erosion. That factor, she says, means that Consumers will likely be “a player” in future conversations between the township and the two families about erosion protection.

As for the GoFundMe campaign, Och tells the Leelanau Ticker she’s amenable to what local residents are seeking.

“I welcome another look at this [settlement],” she says. “That’s fine. I just wish that this citizens group would have gotten organized earlier and asked for a seat at the table during mediation."

Editor's Note: A previous version of this story included a wrong spelling for Char Lombardo's name.